KIRIA: All Hail the New Queen of Darkness

Know ye mortals: there is darkness, and there is light, and somewhere in-between, you’ll find KIRIA…

Behold! A singer-songwriter whose new album “Noir Diadem” is set for worldwide release on Amazon and iTunes on May 1st, 2011.

KIRIA personally wrote and composed the 11 tracks found on “Noir Diadem”. Explaining her music is… difficult. Her songs contains touches of electro, classical, and goth, but none of these genres is occupied for very long. The only real constant is KIRIA’s voice, which scales to dizzying heights and delivers lyrics partially in Japanese and partially in a made up language all her own. The result is an otherworldly atmosphere that KIRIA describes as “aesthetic, decadent, and fantastic.”

But lest you be lured astray into a world of illusion by her siren’s wail, keep in mind that there is a very real person behind the persona. Here’s what I managed to dig up: she’s a fan of BL and anime like Black Butler and Hell Girl, her favorite food is yakiniku, and she’s a voracious reader of used books.

All these disparate things flow into a deep well of inspiration. Says KIRIA, “I give birth to a song when a wave of feeling happens. I feel that I’m giving birth rather than writing the tune. However, it is a birth that comes from sorrow.” 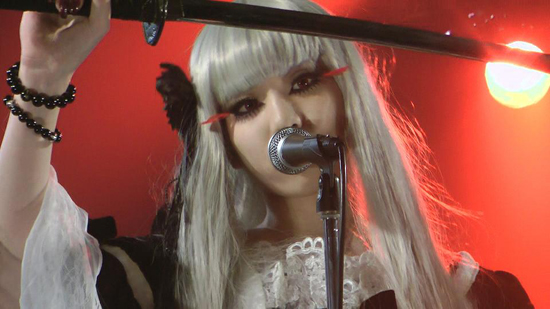 “Noir Diadem” is KIRIA’s 2nd album. In addition to her recorded output, she’s also a  live performer in Tokyo who appears on stage in striking costumes accessorized with bloody bandages, frayed dresses, samurai swords, and distressed hair. “Someone said it looks a bit like a musical or a play.”

While not all of us may be able to see KIRIA live (not yet anyways) a listen to “Noir Diadem” would be the next best thing; a chance to exist—however transiently—in a strange new world of high drama, sensuality, and ever-embracing darkness.