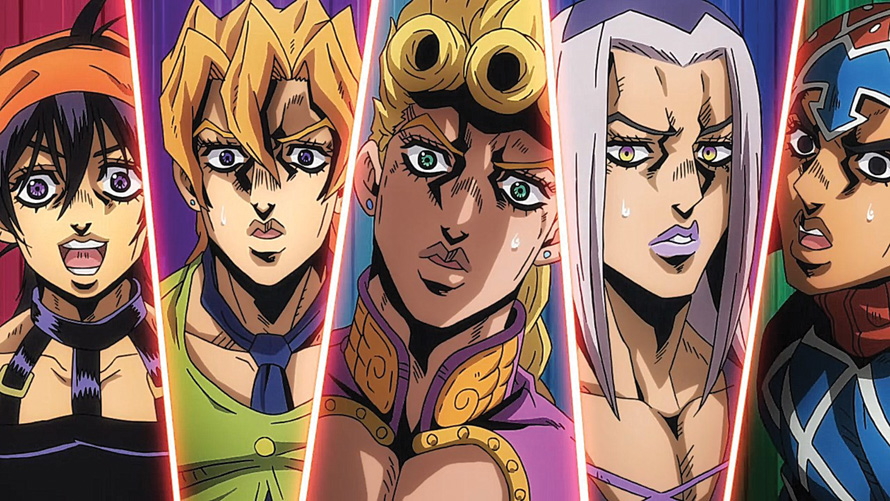 Historians will look back on the year 2017 with scorn and revulsion, for it was a time in which the world was objectively drastically worse off compared to the prosperity period that was 2012 to 2016. This is of course because in stark contrast to that era, 2017 was a year without any Jojo’s Bizarre Adventure anime at all. Dark, trying times indeed. But now, after nearly two arduous years devoid of people in silly outfits striking anatomically improbable poses before killing one another using questionable application of superpowers and critical thinking skills, the time has come for animation studio David Production to bring yet another saga of Hirohiko Araki’s beautiful raging manga id to our television screens.

For those new to the series, each part of Jojo’s Bizarre Adventure is more or less stand-alone, as they each take place in vastly different geographical locations and eras. For instance, Part 1 aka Phantom Blood is set in 1880s England, whereas this latest Part 5 aka Vento Aureo (Italian for “Golden Wind”) takes place in Italy in the year 2001. As such, the “Jojo” of the title refers to a variety of people for whom Jojo is a nickname, not just one character. This time around, our Jojo—or should we say “GioGio?”—is talented pickpocket Giorno Giovanna, the secret teenage son of everybody’s favorite dog killer turned pointy elf shoe-wearing vampire Dio Brando, the iconic antagonist of Parts 1 and 3. 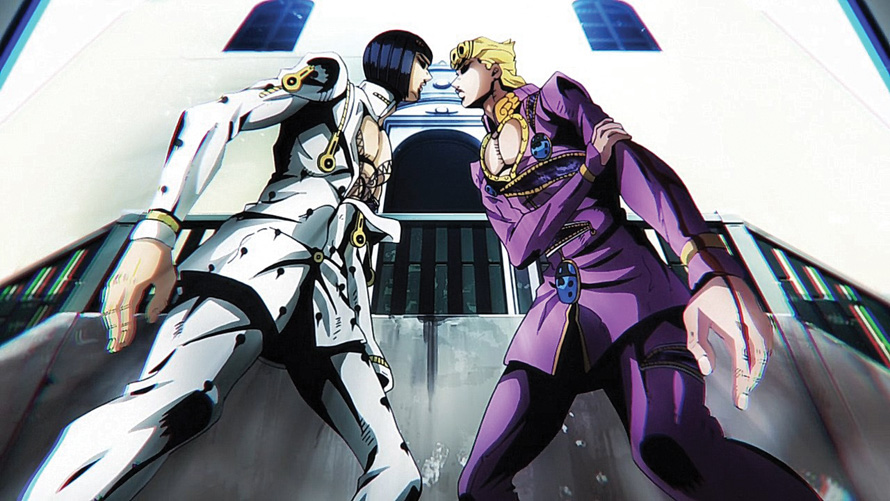 Like everybody in the series since Part 3, Giorno possesses a special projected psionic ability known as a Stand. “Gold Experience,” officially known as “Golden Wind” because like all of the other musical references in the series it must be changed to avoid potential lawsuits (plus, it matches the title), is capable of transforming objects into living creatures upon which any damage inflicted is instead reflected back on the assailant. This comes in handy when needing to transform one’s own teeth into a jellyfish so that you can drink a teacup’s worth of urine for the sake of being inducted into the mafia; the first step in becoming the top gangster of all … a Gang-Star, if you will.

Giorno can also take his ears and fold them completely inside of his head, but that talent has less criminal applicability. Look, no sane person ever tried to argue that Jojo’s Bizarre Adventure doesn’t live up to its name. And while on some level, Hirohiko Araki understood that after hitting peak glam Fist of the North Star with Stardust Crusaders it was futile to remain on the Shonen Jump power creep treadmill, Gold Experience does possess a traditional combat ability in that anybody it strikes is made to temporarily perceive the world in slow motion and react accordingly. But fear not: the shift toward sleeker, less musclebound frames may be slightly divisive, but the rapid punching is here to stay. 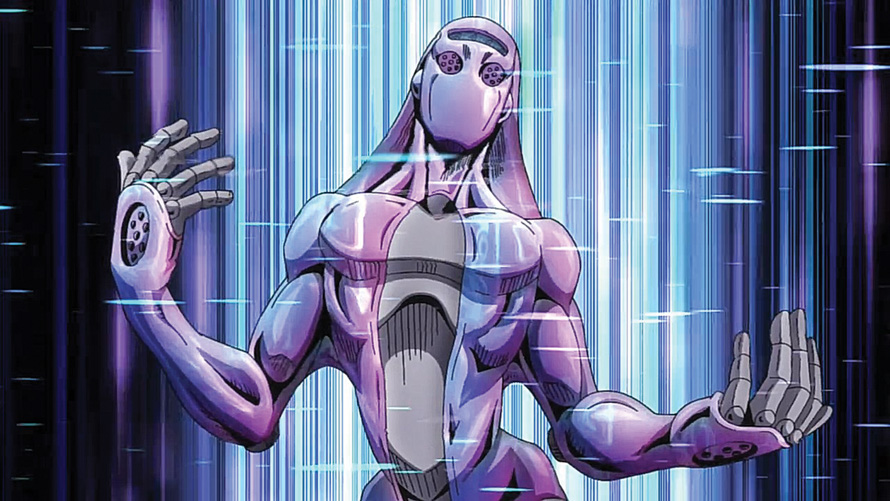 Joining and then taking over the mafia organization known as Passione is no small task for a teenage kid looking to clean up the streets and declare war on all those who sell drugs in the community, especially since everybody in the Italian mob that is responsible for selling drugs in the community has mysterious Stand powers of their own. Typically, someone with such gifts would do far better for themselves, but nearly everybody in Jojo’s Bizarre Adventure is an endearing combination of genius and doofus such that even if you can, say, add and remove kinetic energy to as many objects as you can see at will, you’re still just a low-level underling.

Early on it’s pointed out that “gang members in this city hate standing out, as it can quickly lead to their assassination. So even the capos will dress normally to blend in with the crowd …” which if true means that Giorno and company don’t stand even the slightest of chances of getting promoted past mafia busboy without attempts being made on their lives considering they’re all sporting the sorts of outlandish getups that Jojo’s is famous for. 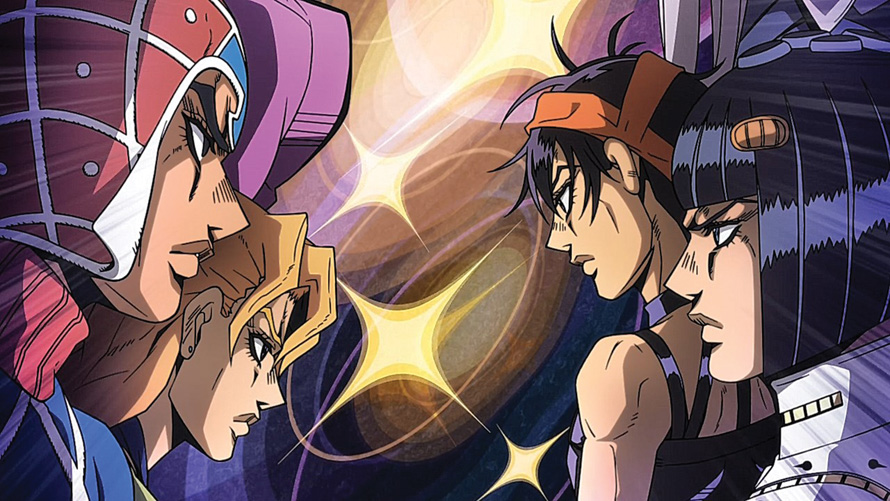 Neighborhood block leader Bruno Bucciarati rocks zippers like a Tetsuya Nomura antihero, which befits his Stand known as Sticky Fingers (uncreatively renamed “Zipper Man”) that enables him to conjure zippers on anything it hits which can then separate or join them as needed. For the record, that is entirely separate from Bucciarati’s natural ability to tell whether people are telling the truth by the taste of their sweat. The local capo, Polpo, runs his turf from within a jail cell on account of his being so fat that when he lies down, he looks like a king-sized bed. The wacky characters and “so high it’s low” fashion senses only escalate from there, with suitably off-kilter personalities to match. Some of the goofy Stand name changes are lazy, such as how “Moody Blues” becomes “Moody Jazz,” but others are downright inspired; my favorite thus far is “Kraftwerk” being changed to “Arts and Crafts.”

It generally takes Adult Swim a little over two years to air English-dubbed versions of Jojo’s Bizarre Adventure on American television, giving them the luxury of using a home video version that isn’t censored for violence like the Japanese television and simulcast is. Luckily, this time around it seems like the bloody violence remains intact even for Japan, which is good because one does not become a Gang Star without turning guns into bananas such that when your victim bites into what they think is a delicious banana, they’re actually shooting themselves in the mouth. Therefore, I recommend the Crunchyroll simulcast of Golden Wind without hesitation, even if I do think 1995’s “Freek’n You” by Jodeci is completely ridiculous for an end credits song!

Snow White with the Red Hair Vol. 1 [Review]
The Original Neon Genesis Evangelion TV Series Is As Relevant As Ever