If Punch Line Sounds Crazy, That’s Because It Is 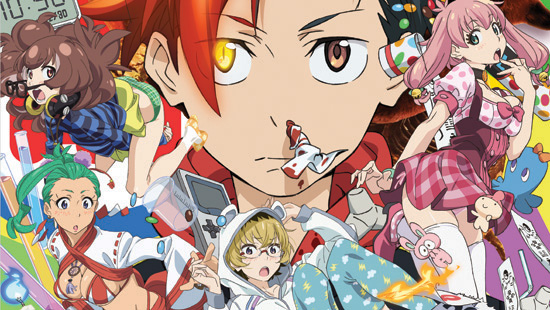 Panties are harmless pieces of clothing. Sure, they’re titillating in many contexts, but for the most part they’re just underwear, right? No need to freak out. Tell that to Punch Line protagonist Yuta Iridatsu, who goes absolutely nuclear if he catches a glimpse of them: frilly, plain, cotton, striped, or what have you. If he so much as lays eyes on the frilly things, he goes the equivalent of a Super Saiyan. One more look, and he brings about the destruction of humanity as we know it by way of an asteroid collision with Earth. With plenty of pretty girls around him at all times, that basically means Yuta has to either control his urges or keep his eyes closed. No pressure right? That’s Punch Line in a nutshell, the latest addition to the noitaminA lineup and project featuring Koutarou Uchiksoshi of Zero Escape fame, as well as Yutaka Uemura, Gainax veteran. With a premise this bizarre, it’s got a pretty bright future … and plenty of panty shots.

Punch Line starts out innocently enough. Yuta Iridatsu is riding aboard a bus and suddenly finds himself at gunpoint, held hostage by hijackers. Things look pretty grim until a masked woman named Strange Juice comes aboard after zooming alongside the bus on a super-powered bike. She boards the bus and makes a grand entrance, only to beat up the bad guys with an enormous bendy straw. 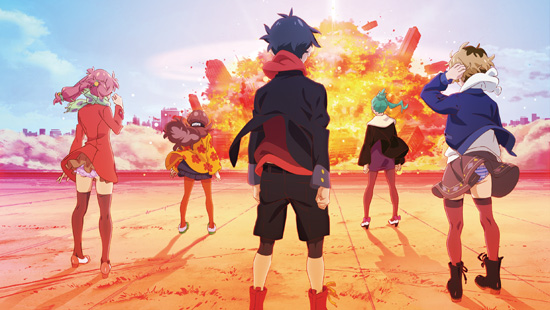 When she miscalculates her movements and finds herself ambushed by the hijackers, however, everything seems lost. A strange white-haired man is about to take Strange Juice’s life,until he takes note of a character that looks like a “G” on her neck. In the process, her panties are revealed to the passengers on the bus including Yuta. Coupled with the parted legs of his companion Rabura, whose underwear is also on display due to the way she’s sitting, it’s all too much for Yuta.

In that moment, a crazed Yuta transforms into a superhuman with red hair and yellow eyes, taking out the gunman and pushing him out into the ocean below. Two mysterious girls reach out to Yuta to keep him from drowning, and with the terrorist falling into the raging waters, Yuta finds himself waking up next to the heroine, Strange Juice. When an errant wind lifts Strange Juice’s skirt and reveals her panties yet again, this causes a bit of a crisis, as Yuta loses consciousness and it appears his very soul has left his body by way of a weird yellow light in the sky. When later he wakes up in his apartment, he’s suddenly a disembodied spirit and a talking cat tells him he must recover his body, which has been taken over. To do this, he’s got to find an ancient Indian tome hidden within his apartment complex. 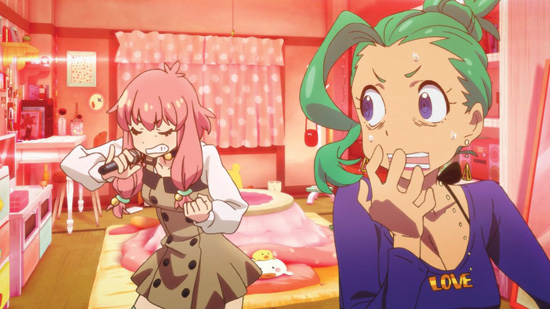 A Ghost of a Chance

If it sounds crazy, that’s because it is. It’s a weird ride from the first episode through the first several. If you’re a gamer you’ll find plenty of plot points you recognize as well as the dissection of several tropes, which alone make it worth a watch. From the very beginning we’re introduced to a colorful cast of characters that don’t all make sense to us immediately. You’ve got Strange Juice, who it turns out is actually one of Yuta’s roommates: Mikatan Narugino. She’s part of the idol group She’s Mei and also the part-time superhero that stopped the bus-jacking but quite possibly started all of this mess. She’s an adorable and innocent girl who doesn’t seem at all like she should be some sort of crime fighter, and it’s unclear how the relationship between her and Yuta will develop, but it’ll likely be strained since Yuta saw her panties not once, but twice y during the first episode, which led to the swift and immediate destruction of the world.

This happening in the first episode should set the tone for the rest of the weirdness that’s going to unfold throughout the entirety of Punch Line, especially the fact that, as Yuta learns later from the spirit cat Chiranosuke, time doesn’t apply to spiritual beings and he can simply go back in time and redo the events that led up to the world being destroyed. This safety net is a strange plot point, especially when you consider the ramifications of time travel and the overtly complicated nature of doing such complex maneuvers in anime (think Puella Magi Madoka Magica and Akemi Homura’s trials!). Being able to simply “reset” means a lot for the future of the show, and it’s an exciting prospect. 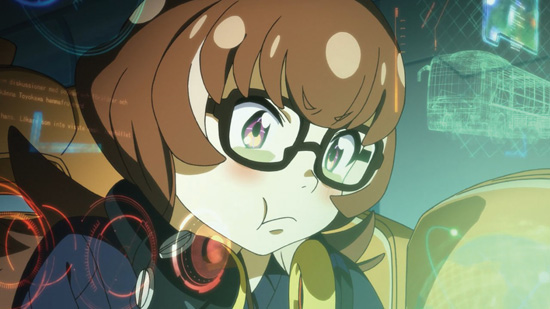 The other supporting characters have interesting backgrounds as well, though none so interesting as Strange Juice and her “transformation” sequence, which is really her twirling around a fake magic staff and dancing around her bedroom while others look on in disbelief. It’s a nice lampoon of the magical girl genre, especially because we often find ourselves wondering why all the time is spent on transformations while enemies look on and wait patiently for the magical girl of the day to
eliminate them.

I also enjoyed the name of Strange Juice’s sidekick, Pumpkin Chair, which made absolutely no sense, and the NEET Iko Hikiotani, who spends most of her time at home playing online games and taking care of a tiny bear cub. 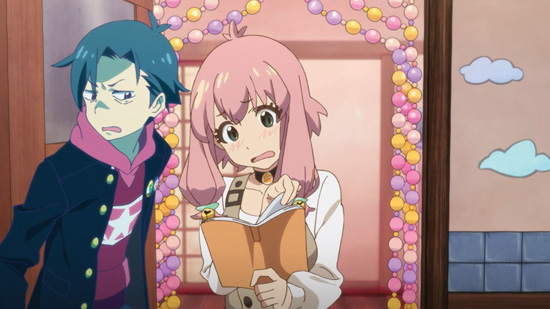 One of the most interesting parts of the series, beyond its colorful cast of characters, is how much it seems content to stick to the type of logic and thought processes relegated to video games, such as the whole “resetting” thing when it comes to the asteroid destroying humanity, and all that. Yuta also must “level up” his special spirit powers before he can truly interact with the world around him as a spirit. His poltergeist powers aren’t very impressive starting out, but as he performs bigger and better feats, announcements appear over his head and let everyone know he’s leveled up. Plus, he has to do all this while avoiding panties.

It’s a lot like a game such as Hotline Miami, if you think about it, as you’ve continually got to calculate where the enemies are hiding in that game and continually restart to avoid them and kill them before they kill you. Seeing this in action in an anime series is quite refreshing, even if the premise is a bit silly at times. I’m not sure how many people would get that excited over panties to begin with, but for such a frenetic and colorful series like Punch Line, it works. 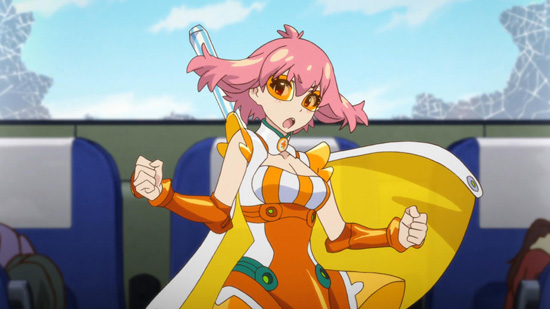 Strange Juice and an Even Stranger Story

Punch Line is a fun and interesting amalgam of fan service, memorable characters, and even a sizzling soundtrack with hints of dubstep. It sets itself apart from the rest of the pack with one of the silliest premises you’ll see (thank Gainax personalities, no doubt) and characters that beg you to stick around to find out more about them. Despite its insistence on keeping panties on display and keeping the spotlight on the female characters’ assets, it’s an adventure that’s worth taking, especially if you need your anime flavored a little more oddly these days.