Shonen Battle Action is on the Menu in Food Wars!: Shokugeki no Soma 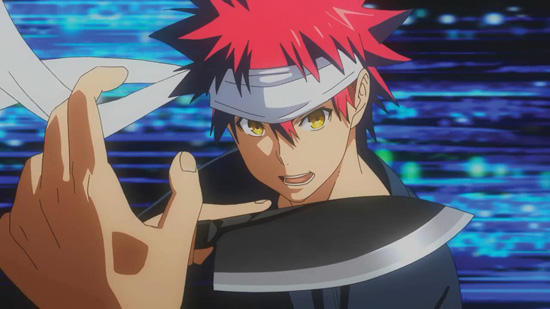 The beauty of the action-adventure shonen battle formula is that it works even when applied to activities that have nothing to do with martial combat. The activity barely matters: you can play games, race cars, build models, and do yo-yo tricks with the same bombast as if you were fighting for dear life and it’s still just as compelling. One of my favorite ongoing titles, Food Wars!: Shokugeki no Soma, is this decade’s reminder that cooking is no exception.

Soma Yukihira spent his entire childhood working in a small-town diner with his father, never seeming to create meals better than what his dad made despite years of endless culinary experiments often bordering on the absurd. Unbeknownst to Soma, the reason for this is that his dad was the most awesome high cuisine chef there ever was. Declaring that the only way Soma will ever surpass him is to follow in his footsteps, Dad sends Soma off to the most prestigious high-end cooking school there is: the esteemed Totsuki Institute! 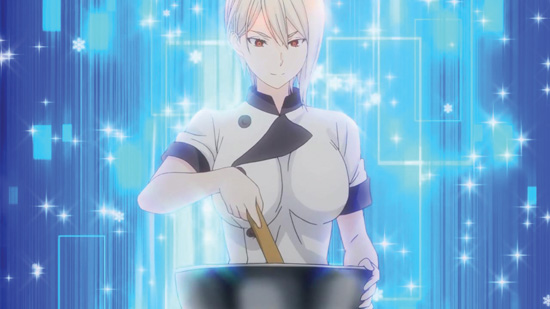 Taking great pride in the fact that 90% of their students must drop out, the Totsuki faculty fosters a “survival of the fittest” environment where the top 10 students get to call the shots and utilize the institute’s limitless resources to take their cooking to levels never before seen!

But one doesn’t gain such a distinction through lame stuff like “good grades” or “democracy.” Such elite distinctions are acquired the same way one acquires everything else at Totsuki: fighting for it by way of a cooking duel, or “shokugeki” where you make a wager of agreed-upon equivalent value and then prepare a dish incorporating a decided theme or ingredient which is then evaluated by an odd number of impartial judges. Instead of different superhero powers or martial arts styles, everyone in Food Wars! has cooking specialties they excel in. Some just need to discover what they are. 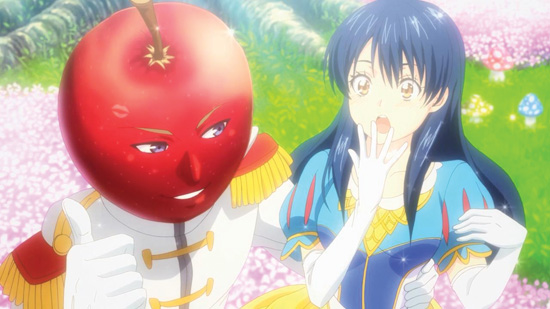 As an upstart transfer student who isn’t fabulously wealthy like most of the students, Soma gets sent to live in the dorm where all the other campus weirdos reside. The name of the dorm, along with a few other terms, varies depending on whether you’re reading Viz’s manga translation or watching the anime. I personally prefer the manga translation of “Polaris” since the anime’s “Polar Star” translation is too generic. There are, after all, multiple polar stars, and the gag where Soma becomes ripped and has seven scars on his chest only works if it’s the NORTH Star!

No one person is dangerous enough to create a work as stupendous as Food Wars!: Shokugeki no Soma. Putting aside the myriad largely uncredited editors, the original manga is from a deadly trifecta: author Yuto Tsukuda to devise the characters and plot developments, celebrity cosplayer/gourmet chef Yuki Morisaki to devise all the recipes and provide all the gastronomical explanation dialogue, and former “ero” artist Shun Saeki to draw everyone way more attractive and, er, developed than anyone I ever saw in high school along with all of those delectable comestibles! Sex appeal is present and undeniable, but that isn’t the reason Food Wars! excels. I know, it sure may seem that way based on some of the promotional images and moments people share, but it’s really just garnish to the main dish, which is the strength of its cast. 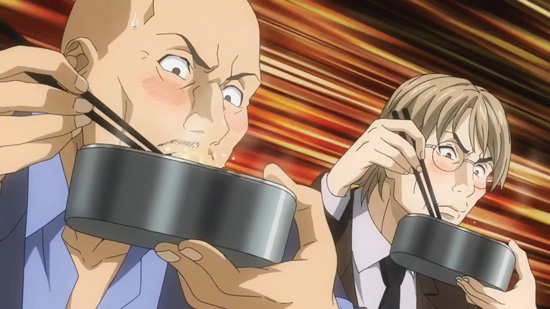 It isn’t apparent from the start, but Soma only seems to be the perfect unbeatable type of shonen hero. The reality is that he has others to help him in the areas he’s deficient in just as he does for them, and—get this—he actually gets beaten when it makes sense for him to do so! The supporting cast also gets ample time to shine, and care is taken to keep virtually everybody strong in the sense of “who would beat who?” while still taking care to show that no matter how cool and imposing everyone seems, they’re all lovable dorks.

Case in point: Erina Nakiri, freshman and heir apparent to Totsuki, may seem cold and evil at first with her “God Tongue” ability to identify every aspect of a dish once tasted, but as time goes on it quickly becomes apparent that she’s hilariously incapable of basic tasks without the help of her “secretary girl” lifelong friend, my personal favorite character Hisako Arato. On the flipside is another favorite of mine, Megumi Tadokoro. Seemingly “an ordinary person” of modest means amid a sea of geniuses, this would-be shojo series heroine quickly steps up after some assistance from Soma and returns the favor. I’m sure fan polling will dictate that Soma and Erina end up together by the end of all this, but I say if there’s any justice in this world it should be Soma and Megumi! After all, Naruto did rightly end up with Hinata! 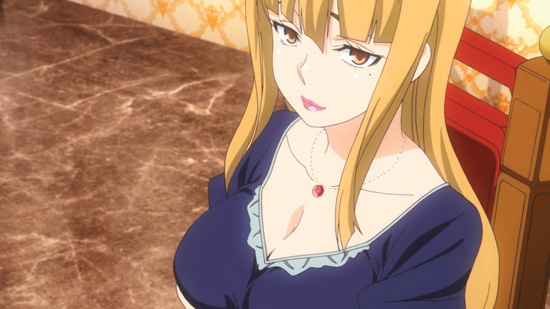 Whether you read every chapter as it’s released simultaneously with Japan in the pages of Weekly Shonen Jump, watch the anime as it’s simulcast on Crunchyroll or released on physical media courtesy of Sentai Filmworks, or do all of the above as I do, Food Wars!: Shokugeki no Soma is priority viewing. You might just want to wear headphones for those first few episodes, though, lest bystanders get the wrong idea of what kind of cartoon you’re watching!

Food Wars! is available from Crunchyroll and Sentai Filmworks.