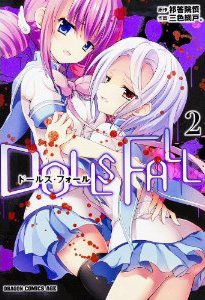 If you’re not aware, a long-overdue child pornography law was passed in Japan this week which finally bans the possession (production and sales were already outlawed) of pornographic depictions of children. The exception is, notably, comics and cartoons, rationale being that children aren’t abused in their production. There is of course a lot of debate as to whether or not this is okay.

The Times covered this in a sane way. CNN, on the other hand, did a tabloid-style moral panic story. After presumably asking someone on an Akiba street “what’s the dirtiest place you know around here?”, they walked into Melonbooks (not work-safe) and proceeded to hyperventilate. For anyone familiar with anime/manga, this whole report comes off very strange

Of course, Melonbooks does sell pornography, but that’s not what CNN goes for. The comic picked out is actually really nasty stuff– Dolls Fall is by the author of Corpse Party and is likewise vomit-inducingly gory– but it’s horror, not pornography. I don’t want to meet the person who’s getting off on it. Did the CNN guys just ask “what’s the nastiest thing you’ve got”, perhaps? With this contraband in his hands, the reporter eagerly whispers, “there’s blood!” Buddy, if you knew… 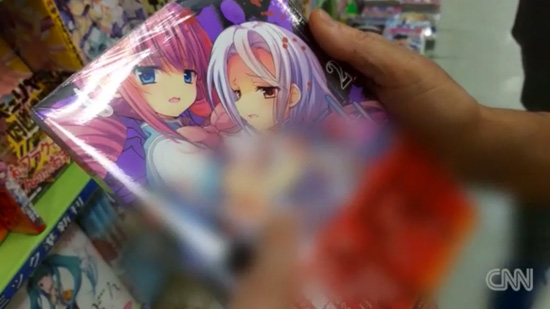 The cover image is even suggestively blurred out below the neck to imply that a sex act is taking place. You can see the actual, rather normal, cover on Amazon.jp. Frankly, CNN didn’t even need to misrepresent a comic to find something damning in Melonbooks… but they did so anyway, which speaks to their standards.

The villain in the CNN story is of all people Ken Akamatsu, who’s given the usual ten seconds of free speech talk. The reporter, perplexed, brushes his finger up against a Love Hina bath scene (I think he’s into Kitsune) and asks “But these aren’t… children being raped?” He’s not really sure what to do without it, doesn’t seem to understand how this Japanese non-child-rape comic book exists. 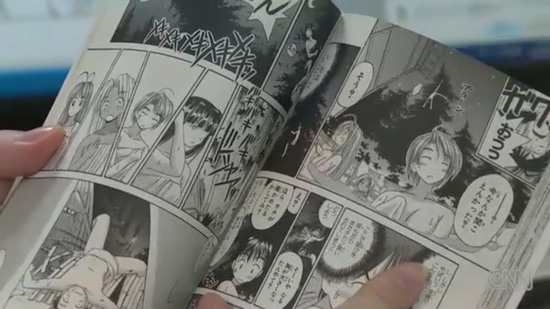 There is a concerted effort in this report to define anime/manga, fundamentally, as child pornography in a cheap grab at some shock and titillation. The report comes from people who clearly don’t know on the most basic level what the hell they’re looking at, and who don’t care much either. And as a fan you should be upset, because this nationally broadcast brush paints you as well. Throw a tomato at ’em.

Wear Mega Man’s Mega Buster on Your Arm
The Next Generation: Patlabor Episodes 2 and 3 Review