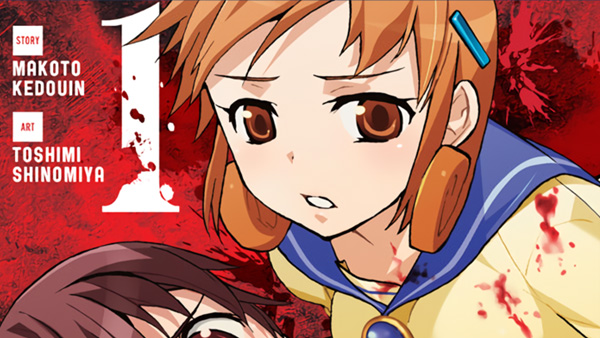 On a dark and stormy night, eight students and a teacher sit in an empty classroom at Kisaragi High School, telling ghost stories. Their tales soon turn to Kisaragi itself, built on the site of another school, Tenjin Elementary, that was supposedly the scene of a horrible death. Suddenly, there’s a blackout! Then there’s an earthquake, everyone passes out, and they awaken to find themselves in the dilapidated ruins of Tenjin Elementary, cut off from the rest of the world.

To make matters worse, they soon discover they are separated, every two or three students trapped in a different pocket dimension, unable to see or hear one another even though they walk the same dark halls. (“This is an alternate dimension, created by vengeful spirits with terrifying power. No one has ever managed to make it out.”) Alone in the dark with nothing but scattered corpses and murderous ghosts, the students struggle to survive …

With little plot and lots of random ghosts popping out at people, Corpse Party: Blood Covered was probably more effective in its original form as a jump-scare video game than as a manga. 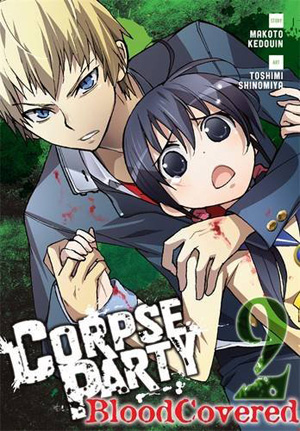 The big problem here, however, is the art, which is so bad that scenes meant to be scary are unintentionally ludicrous. (This isn’t just about the cartoony character designs, either; Kazin Suzuragi’s Higurashi When They Cry manga is just as stylized but manages to be intensely creepy, although it also has the advantage of some psychological depth.)

Though we later see other groups of students, the first volume focuses on two girls, Naomi and Ayumi, the latter the class clown who’s constantly teasing her friend and giving off a yuri vibe (“Heh heh … you just have such a nice body, Naomi, san … I can’t help myself!”). However, fanservice alone can’t distract from this ineptly drawn (and furthermore very slow moving) manga where the only real horror is the horrible art.