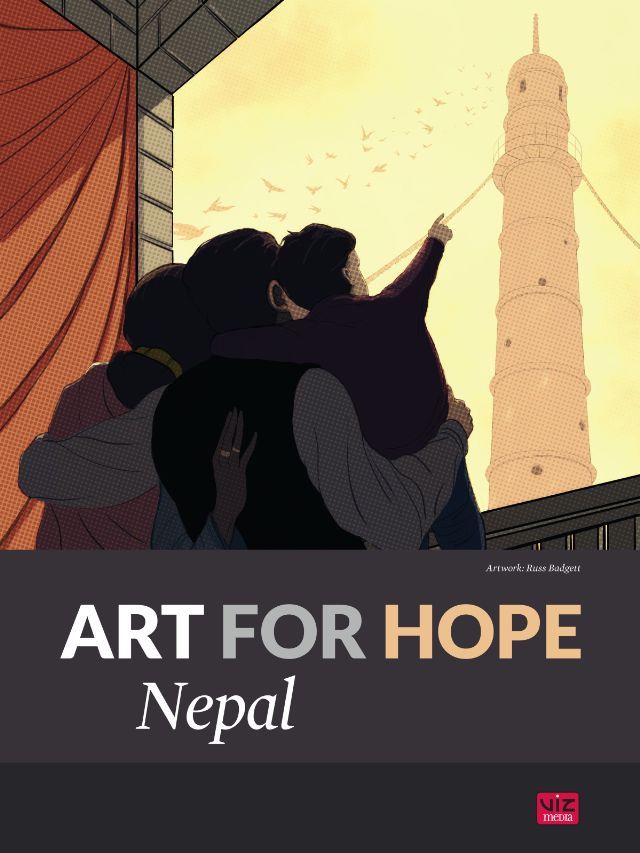 After the terrible 2011 earthquake in Japan, VIZ Media and Autodesk released the digital art anthology Art for Hope with all of VIZ’s proceeds going to disaster relief. Now, several months after the approximately 8 magnitude April earthquake in Nepal, VIZ and Autodesk have teamed up again for the sequel, Art for Hope: Nepal. This time the money goes to Build Change for their help in the disaster relief.

The artwork really runs the gamut, showing everything from manga-inspired art to American comic book style to very realistic representations to the totally psychedelic. There’s basically something for everyone here. You can see a thread of how all of this connects to Nepal, though sometimes there’s only a vague thread (for instance, a flower blossoming out of darkness as a symbol of hope) and other times the art is quite specific (like images involving Kathmandu). But, because it is not a comic book or manga, it does not have a linear, sequential story going on with its artwork. Each piece of art can stand on its own.

This is different from what VIZ normally publishes, and at $4.99 it’s a great purchase for art fans who want to give back. (Coincidentally, the comic book Art Aid Nepal Anthology, out of the UK, has a similar setup of using comics-inspired art to raise funds for Nepal.) Because several months have passed, the situation in Nepal has slipped from the headlines, but it’s important to remember that disaster relief is still needed and there is more we can do.

For Minecraft fans, the young-at-heart and people who know young Minecraft fans, Danica Davidson’s middle grade Minecraft novels Escape from the Overworld and Attack on the Overworld, are now available. You can also listen to the first audio book, which is narrated by anime voice actor Dan Woren of Robotech and Bleach.