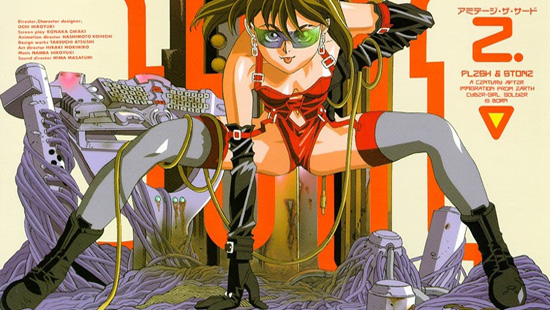 If you were an anime fan in the mid-nineties, it’s likely you ran across Armitage III. A cyberpunk tale in the vein of Blade Runner and Ghost in the Shell, Armitage III was once so synonymous with “anime” that it was featured as part of an MTV Road Rules challenge (ah, the nineties…). Armitage III began life as a 4-part OVA, which was then cut into a 90-minute film called Poly-Matrix. Years later, it was followed up by a sequel, Dual-Matrix. This DVD set collects both films.

The first film, Poly-Matrix, tells the tale of Naomi Armitage, who Pioneer once billed as “a cyber-punk Martian cop in hot pants.” Unbeknownst to her colleagues, Armitage is an advanced (and illegal) “Third-type” robot. Her new parter, Ross Sylibus, isn’t too thrilled when he finds out—his old partner was killed by robots—nevertheless, he and Armitage set out into the dystopian Martian landscape to solve a series of robot assassinations. 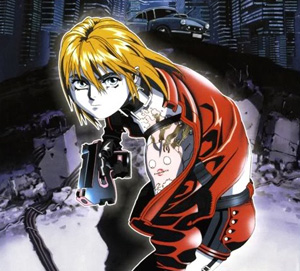 Armitage III was penned by Chiaki Konoda, who went on to write series like Serial Experiments Lain and Ghost Hound, credits that show a fascination with the complex relationship humans have with technology. Though Armitage III doesn’t reach the same literary heights of some of its influences, like Blade Runner or, say, Neuromancer, it does rise above the level of its action set-pieces and explores some interesting themes. When Martians hold protests against robots for stealing their jobs, for example, it’s easy to see the parallels with current anti-immigrant sentiment. Konoda also explores the uneasy relationship of a burgeoning and increasingly independent colony (in this case, Mars) with its owner (Earth).

There are action set-pieces to be had, of course, and they’re generally pretty effective and fun. Keeping the vintage of the film in mind, the animation is quite good. The music, provided by Hiroyuki Namba, is an interesting, only slightly-dated sounding fusion of electronic and jazz sounds.

Poly-Matrix, which runs 90 minutes, was cut from the original Armitage III OVA, a four-episode, 140-minute series. Generally, this is a Bad Thing, rendering plots into nonsensical mash. Here, though, it works well: Poly-Matrix is a leaner, tighter beast than its OVA counterpart, losing some of the fat without hurting the story. It also ends on a bleaker, more poignant note that the “ride happily into the sunset” OVA, something Blade Runner fans will dig.

Interestingly, even in Japan, Poly-Matrix was an English language-only affair, starring a pre-24 Kiefer Sutherland and a post-Showgirls Elizabeth Berkley as Sylibus and Armitage. It’s a respectable dub: it’s not a stretch, after all, to see Sutherland as a gruff, burnt-out cop, and Berkley also delivers a solid performance, keeping the conflicted and occasionally grating Armitage likable.

Dual-Matrix, the second film in this set, was released in 2002, long after the success (and relevancy) of the original. That, plus the fact that none of the original staff were involved, makes Dual-Matrix the sequel no one was really asking for. 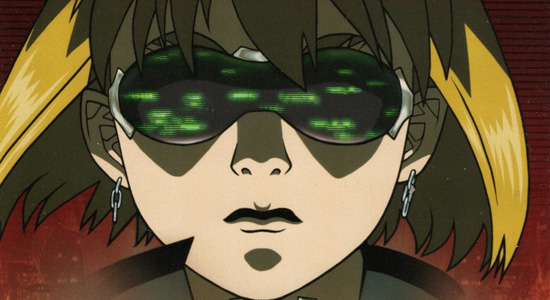 Despite being newer than the first film, Dual-Matrix has aged considerably less well. It uses the same character designs, but they’re rendered in that plasticy, digital sheen indicative of productions from the early naughts. It also features some pretty awful CG, another unfortunate legacy of the time period. The animation itself has a decent amount of fluidity, but many of the best action scenes are set in darkness, so it’s hard to follow what’s happening.

Most important, though, is the plot, which also suffers in comparison to the original. Dual-Matrix tackles many of the same ideas: the rights of robots and the Earth vs. Mars struggle, for example. The problem is, it largely retreads these ideas without expanding on them. And despite also running 90 minutes, Dual-Matrix feels shorter than the original—and not in a good way. Ultimately, it lacks the grand cyberpunk scale of Poly-Matrix.

Is this set worth a purchase? If you already have the original and are only looking to see Dual-Matrix, I’d steer clear. But if you’re a fan of series like Ghost in the Shell or Serial Experiments Lain and missed out on Poly-Matrix the first time around—and if you can forgive its mid-nineties animation and English-only track—it’s a pretty safe bet.