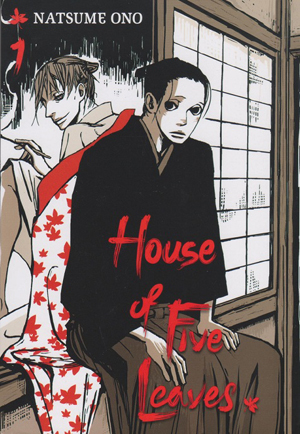 Natsume Ono has developed quite the diverse collection of works for herself thus far. Though not all of them will be everyone’s cup of tea, both the subject matters and styles are suitably diverse—from the haphazard linework of the relentlessly depressing not simple to the elegance of Ristorante Paradiso and its followup, Gente. That brings us to Ono’s take on the period piece, House of Five Leaves, which might just help those on the fence take a leap over to Ono’s camp.

Akitsu Masanosuke is a ronin who exhibits none of the characteristics one would expect of a samurai. He is imposing only in his stature, and even that is plagued by constant hunching and a meek and timid attitude. Despite the fact that he lacks in the intimidation department, he ends up landing a job as a yojimbo (bodyguard) for a man named Yaichi, who finds himself fascinated by Masanosuke’s curious ways.

Naturally, there ends up being much more to Yaichi than meets the eye. He acts as leader to a small group known as “Five Leaves,” who engage in some shady business, not the least of which involves kidnapping to collect ransom. Though Masanosuke wants no part in the inner workings of Five Leaves, he nevertheless finds himself pulled in deeper and deeper by the chapter. Perhaps this is partially due to Yaichi’s manipulative ways, but there’s also a part of Masanosuke that’s inexorably drawn to this strange little clubhouse.

Protagonists like this often walk a thin line between compelling and obnoxious. Shy and submissive works in some cases, but it’s a tough demeanor to pull off without sliding into pathetic territory. Masanosuke may walk the line like a tight-rope daredevil, but he stays well balanced thanks to his charming geniality and bits of information that hint at the man behind the man.

In other words, he’s still got a little bit of mystique to him; and if he’s got a little, Yaichi’s got a heaping portion all to himself. If anything beyond the journey of Masanosuke himself is going to keep me reading this series, it’s the unravelling of the true nature of Yaichi and the obscured intentions of Five Leaves. Are they noble criminals? Is there more to the reasoning behind their targets? These answers are unclear, but the main ensemble of characters presented in volume one are intriguing enough to make me want to find out.

There’s a special kind of beauty to Ono’s art in House of Five Leaves. It’s the perfect premise for her unique style, which is shown off in a couple of different ways throughout. The bulk of the book traces action and expression with thin, deliberate lines, which works particularly well for Masanosuke’s near constant mask of melancholy. Chapters also begin with really classy brush illustrations that might make some wish more of the series was drawn that way. With both Ono is flexing some serious talent in expressiveness and the general layout of her pages.

House of Five Leaves is one of the standouts of Viz’s Ikki lineup and, as with many of the other titles in the category, you can sample the comic here. Let that be fuel for your purchase, because it’s a fine release that’s well worth putting on your shelf with the rest of your collection. If that’s not enough, you can also stream all twelve episodes of Manglobe’s anime adaptation via Hulu.