At the start of 2012, I got the opportunity to try out a small convention I’d not been to. There are those who scoff sometimes at small cons since, say, big name guest ‘x’ or musical act ‘y’ will likely not be in attendance. To those who have this mentality, however, I can only offer this: I feel sorry for you.

Yeah, events like Anime Expo and Otakon have the bigger name attractions and manage to entertain tens of thousands of people pretty well (myself included). However, sometimes what can be lost in that is the better opportunity to make friends and have actual discussions on things related to what folks have discovered by watching anime and becoming part of a community. Sometimes it’s fun to hang out and discuss costume making tips with new folks sitting next to you as opposed to trying to absorb such info in a large room. Also, it could be cool to figure out which editing and effects programs can be used to solve creativity issues while making anime music videos. Better still, a smaller crowd can be useful if you’re just wanting to get good pics of all the cosplayers participating in human chess or Final Fantasy photo shoots.

I got reminded of this while attending Anime Los Angeles in January, as I mostly just watched folks interact and remembered why it’s fun to be a fan. Connecting with others in a hobby and its offshoots in a place not close to home can be a fun adventure in itself. Still, you have to have decent crowd management and panel programming in order to make this all work, and I have to say the team for ALA performed admirably in both respects. Traffic flowed freely and events started on time, so I had no complaints at all. I was able to check out a couple intriguing panels such as what would be the final farewell for the U.S. arm of Bandai Entertainment. Even though they will continue to have a small presence in the American market, the company announced earlier in the week that they would no longer be producing new DVDs or manga, and planned to lay off most of their personnel. This was a bit of a heartbreaking panel, but good for reminiscing on all these guys had achieved. I also got to check out Buried Anime Treasures run by Justin Sevakis, which reminded me how much I really want to see “The Cockpit” on DVD someday. 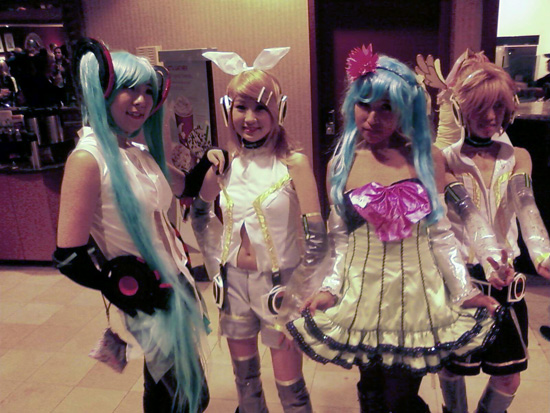 Then there were the panels about con management, which were fun for swapping stories about the triumphs and pitfalls of running a convention. I didn’t make it to every event, but looking through the rather nice program guide, it was cool to see scavenger hunts for badge ribbons and AMV contests and the like taking place. Speaking of the guide, I have to say it’s rather ingenious of them to have a small autograph area beneath the bio of each guest. In addition, there were a good number of voice and industry guests such as Chris Cason, Kyle Hebert and Jake Tarbox, among others, who were likely more accessible to learn from than they would be at a bigger show.

From an artistic standpoint, it was very nice to see how ALA decorated the Los Angeles Airport Marriott with various anime-themed benches. These were nicely done and gave weary attendees a chance to relax with their friends. Also, I mentioned cosplay earlier, but I don’t think I gave quite an accurate picture of how much that aspect played into this show, as touched-up pictures of talented fans graced the hallways. Also, out of 4,200 attendees, I’d honestly guess about 3,500 of them dressed as their favorite comic, anime, and video game characters. I don’t think I’ve seen quite a concentration of creativity in a single place before.

All in all, I have to say Anime Los Angeles is a very competently run show and made for a relaxing time. I have to thank them for putting on a quality event, one I hope to have a chance to return to someday.