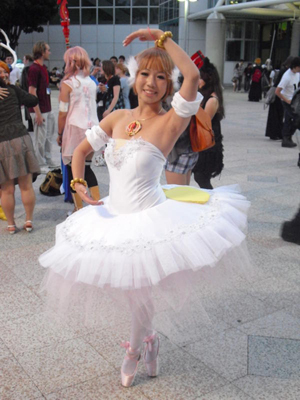 For Day 2, we jumped straight into the craziness of industry activity and con events.
First stop was the Universal Geneon panel, where the representatives talked about the titles Geneon was releasing in Japan and preparing for license in the U.S. and other places. Titles such as Hellsing Ultimate, Black Lagoon, A Certain Scientific Railgun and Highschool of the Dead were of high interest. The panelists noted many of these titles would be licensed by Funimation (with whom they have a “very good relationship,” but don’t want to limit distribution to). They specifically emphasized Highschool of the Dead was still a secret license to be elaborated on later at the convention, but the general feeling among attendees was that Funimation would turn up with this license, as well. Geneon also spoke about their music endeavors, announcing the availability of various anime themes on iTunes in North America.
(NOTE: later that day, Sentai Filmworks announced on the Internet they had acquired the license for Highschool of the Dead, to begin simulcasting on July 9.)
So we continued to walk around the convention, taking pics of more cosplayers and checking out the video game rooms and such when we came upon a group of organizers from various conventions such as Anime L.A., Otakon, Anime Weekend Atlanta, Fanime, Kawaii Kon, Anime Central, Animation on Display, Anime Expo and others sharing ideas about the pros and pitfalls of running fan events. I have to say it was pretty cool to see all these people coming together to figure out the best ways of serving the community at large, and hope to see more planners work with each other like this.
Afterwards, we were able to check out one of several concerts taking place at Anime Expo in the Nokia Theater. This amazing performance was by May’n (whom we interviewed prior to it) and Megumi Nakajima, two ladies who’ve become very prominent among anime fans for their work on Macross Frontier. It was fun seeing them each get the crowd moving in individual sets, with May’n jamming several upbeat works before deferring to the soulful melodies of Megumi, who eventually made an announcement in the middle of her session: “Ladies and gentlemen, our secret guest: Yoko Kanno!” 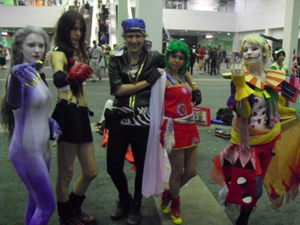 Sure enough, out walked the Macross musical genius to take her set at the piano on stage to play background for the vocalists as they belted out “Voices” and “Do You Remember Love.” I have to say it’s an awesome experience seeing the hall cameras focus on Kanno’s hands as she’s creating magic on those keys, much like Stevie Wonder or Elton John. All in all, with the incredible talents these three women displayed in two and a half hours for the Anime Expo attendees, this was just about the greatest Macross concert anyone will see for a long time.
Soon after we had to come down from the fanboy afterglow and hit the presentation trail once again, starting with the Right Stuf and Nozomi Entertainment panel hosted by Shawne Kleckner (or Darklord-sama, as he prefers attendees to call him). He announced the acquisition of the anime series Sora no Wato, as well as the rescue of the license for Revolutionary Girl Utena, which has had many anxious anime fans speculating and hoping for a while since the decline and fall of previous licensee Central Park Media. Kleckner also clarified that this release, for which Nozomi negotiated years to acquire, would be three separate box sets based on the remastered Region 2 discs from Japan with better picture quality and subtitles than the previous releases. However, Nozomi Entertainment did NOT have the rights to the movie, which would have to be negotiated with a separate licensor. (Of course, the next day, Production I.G, announced that Right Stuf / Nozomi Entertainment had acquired the license to the Utena movie.)
Kleckner also spoke about the upcoming release of the 1980s Dirty Pair TV series, for which there will be two box sets of 13 episodes. The footage will also be taken from R2 remasters and will be subtitled only. He indicated there would be bonus materials arranged for the releases but Nozomi Entertainment is keeping them secret for now. The upcoming versions of the El Hazard TV series will also be remastered visually but will retain its original dub track. Kleckner went on to affirm that any show previously licensed by other companies and then re-released through Nozomi Entertainment would likely retain their original dub tracks. 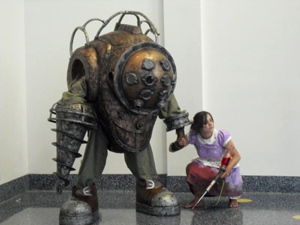 Speaking on other matters, Kleckner noted that although people do ask for them from time to time, they have no plans to release original soundtracks from various anime into North America (as those require separate lengthy negotiations). He also spoke on the subject of His & Her Circumstances when one attendee asked about an extra episode and bonus materials released in the R2 set, responding “We tried to pick up extra stuff for Kare Kano, but it didn’t work out.”
After we took in many of the cosplayers’ excellent outfits, our next stop on the parade of panels was Funimation Entertainment, which was sure to be a doozy with 29 title announcements (!).  Convention guru Adam Sheehan played host to a large room packed with anxious anime fans awaiting their favorite shows’ arrival on U.S. shores. After giving an overview of the state of the anime industry and Funimation’s current role in things, Sheehan began listing Funimation’s newest ventures.
To start, he announced the simulcast of the live-action series Moyashimon, about a farmer’s bacteria. Moving to anime simulcasts, the announcements included Shiki, Black Butler season two, Sekirei season two, Sengoku Basara season two, and Legend of the Legendary Heroes. Sheenan also announced the streaming of Chrono Crusade, Gantz, Kaleido Star, and Peacemaker Kurogane. 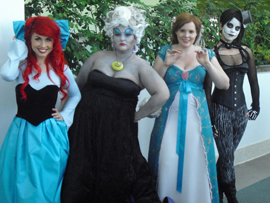 It was then time for what many of the attendees came to hear: new title acquisitions. This year’s crop included all of the Tenchi Muyo movies and series, Hellsing Ultimate 5-7, Armitage III, Texhnolyze, Serial Experiments Lain, Haibane Renmei, Darker than Black season two, Ai Yori Aoshi, Last Exile, Shakuga No Shana season two + movie, A Certain Scientific Railgun & Index, and the new Black Lagoon OAV: Roberta’s Blood Trail.
As these announcements concluded, a man cosplaying Vash The Stampede suddenly showed up at the front of the panel, declaring he had a special delivery for Sheehan. This turned out to be a DVD containing the trailer for Funimation’s biggest title of the day: the “Trigun – Badlands Rumble” movie, which they just licensed that week. Although it had been screened at Sakura Con a few months prior to this convention (and to its own release date in Japan), the film would make its debut screening with official English subtitles the day after this panel (Saturday) with a special dignitary in attendance: producer Shigeru Kitayama, who would be giving away signed sketches and film programs to several audience members attending the screening.
To finish off the panel Sheehan fielded questions from the audience, including certain anticipated and/or frequent inquiries. In response to the question of possible theatrical distribution for Trigun: Badlands Rumble, we were told “Stay tuned for wonderful news.” As to the popular topic of Evangelion 2.22: You Can (Not) Advance, “We don’t have it, so we can not advance.” (2.0 was, however, finally confirmed at Otakon -ed.) A similar sentiment was given about the Lupin III vs. Detective Conan movie convention attendees often ask about, given that Funimation has released several titles from both properties previously. In addition they do not have plans to license the second season of Big Windup, since the first one didn’t sell well. 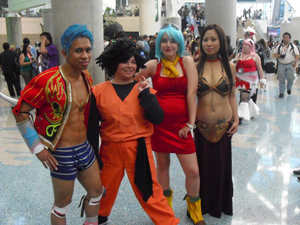 After a bit of a break and more cosplay pics, it was time for the final industry presentation, given by Aniplex of America. Vice President of Marketing and Development, Hiroe Tsukamoto, kicked off the “Who The Hell Is Aniplex?” panel with details on the releases of the Gurren Lagann movie DVDs. Both films “Childhood’s End” and “The Lights In The Sky Are Stars” would be available as stand alone discs and in 2-disc limited editions with extras such as program books, music videos and various other items to be distributed on Bandai Entertainment’s website “The Store.”
This in turn led to discussion of Aniplex’s own website [www.aniplexusa.com], which was officially launched during this panel. It includes links to Aniplex’s Youtube channel, containing clips and trailers from their works. They will also be streaming the first 22 minutes of the new anime film Welcome To The Space Show, produced by the team behind Read or Die and the R.O.D. the TV, featuring a closing theme by British artist Susan Boyle.
In addition, the site will be streaming full episodes of Konnichi, Toward the Terra, and R.O.D. the TV.
There was also discussion of their big event the following evening, screenings of both Gurren Lagann films with a special intermission appearance by Katsuyuki Konishi, voice of Kamina. Konishi would also be on hand to judge the finalists of Aniplex’s Gurren Lagann cosplay contest. 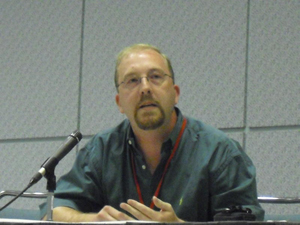 Then Tsukamoto gave the crowd its most anticipated announcement of the evening: Aniplex’s intention to bring the anime series Durarara to the United States, with the first DVD scheduled for release in January 2011. She announced there will be an English dub track but the cast (and presumably the studio) would not be announced until Otakon. They also do not have a specific plan for putting Durarara or any of their other releases onto the blu-ray format, but one may be coming soon. However, Aniplex did launch another site [DurararaUSA.com] during this panel.
So ended the heaviest day of industry events at Anime Expo, but there were still plenty of other activities to come in the final two days.
I have to give a lot of credit to my translator Rika Everett and my secondary photographer GAI. Were it not for these two helping me out, much of the recording of what you see in these reports from that weekend would not have been possible. So a giant dose of thanks to these people for their serious efforts.
Cosplay/Cons 137