Anime and Manga on the Big Screen

Live-action adaptations of anime and manga are an inevitably contentious topic, as more often than not fans are worked into a furor over a film project that may not ever enter production. Case in point: the recent announcement that Scarlet Johannson has been cast as The Major in a Hollywood adaptation of Masamune Shirow’s Ghost in the Shell. Johannson’s casting in a film based on a series with unambiguously Asian characters drew criticism for white-washing (and rightfully so), but highlights the balance between accuracy and marketability that must be struck to get film studios to agree to these projects.

Last year we discussed adaptations that were never actually complete, but today we’ll be discussing those that actually were released, for better or worse. 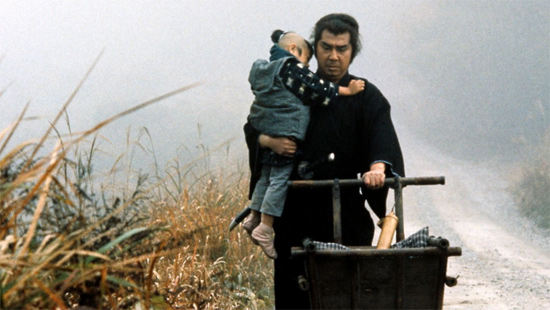 Chambara, or “sword fighting,” films dominated the Japanese filmscape of the 1970s, and so it made perfect sense that some of the earliest live-action adaptations of manga were based on titles that could capitalize on the genre’s popularity. The most notable adaptation, and one of the earliest, was a series of films based on Kazuo Koike and Goseki Kojima’s Lone Wolf and Cub series. If that name sounds familiar, it’s because Lone Wolf and Cub was one of the first manga titles brought over to the United States in the ‘80s, and has since taken up a constant presence on the shelves of comic book shops. 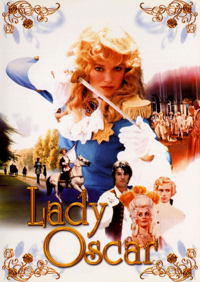 Another early live-action success story was Go Nagai’s Harenchi Gakuen, a manga series about a particularly rowdy high school school that premiered in the very first issue of Weekly Shonen Jump, way back in 1968. The manga ran for four years, until 1972, and spawned five live-action movies, one live-action TV series and an OVA in 1996.

Perhaps the strangest adaptation of the ‘70s was Lady Oscar, a French film directed by Jacques Demy based on Riyoko Ikeda’s long-running shoujo series, The Rose of Versailles. The film, oddly enough, was filmed in English, despite the fact that The Rose of Versailles hadn’t, and still hasn’t, been released in English. Author and translator Frederick L. Schodt mentioned in an interview that he actually translated the entirety of Ikeda’s epic into English for the film’s producers, but foolishly gave them the only copy. As you can probably expect, it was never seen again.

Shinji Wada’s Sukeban Deka manga, first serialized between 1976 and 1982, blossomed into a huge live-action franchise in the ‘80s. While the manga’s storyline, about a delinquent girl forced to go under cover in Japanese high schools and fight crime, is suitably weird, the series’ defining aspect may be the metal yo-yo the heroine uses as a weapon. With tokusatsu-styled action, Deka combined school girl imagery with a kick-butt heroine. Three different live-action TV shows based on Sukeban Deka ran from 1985 to 1987, and were followed by movies in 1987 and 1988. A film remake, titled Yo-Yo Girl Cop, was released in 2006 and a two-part OVA came out in the early ‘90s. For anime fans who also consider themselves tokusatsu or sentai fans, the Sukeban Deka is worth checking out.

The Japanese economy in the ‘80s was riding high, and inevitably some of that trickled down to the anime industry. The result was that some anime releases had the budget for seriously superfluous promotional material, like the 5-minute promo that accompanied the release of the Appleseed OVA in 1988. Little more than a couple of people in cosplay running around an abandoned factory, the Appleseed promo taps into some of the biggest nerd fetishes of the ‘80s: cute girls, guns and robots.

Makoto Kobayashi’s Dragon’s Heaven OVA, also released in 1988, featured a live-action intro showcasing some animatronic robots built by Kobayashi himself. They look a bit silly by today’s effects standards, but behind-the-scenes footage in the OVA’s credits show just how massive they are. In the same vein, a 9-minute short was produced based on Kow Yokoyama’s SF3D/Maschinen Krieger model kit line, which while not technically anime, shared plenty of shelf and magazine spread space with the likes of Gundam and Macross. Lest you think this kind of stuff was purely a relic of the ‘80s, remember that End of Evangelion, released in 1997, also featured some live-action sequences, as well as a trailer featuring voice actors playing their character on the streets of Tokyo.

An unofficial adaptation of one of the most popular manga and anime franchises, Dragon Ball, was produced by Taiwanese filmmakers in 1991. Known as Dragon Ball: The Magic Begins, it’s about what you’d expect for a low-budget, unofficial film adaptation of Akira Toriyama’s staggeringly popular comic, although it gained notoriety among Western fans in the ‘90s when tape-trading was a big deal. It was rereleased in 2007 with a longer running time and some cheap computer graphics, but only diehard Dragonball fans need bother. Is it as bad as Dragonball Evolution? We’ll let someone else make that call.

Crying Freeman was a long-running manga series by Kazuo Koike and Ryoichi Ikegami that was a staple of Viz Media’s library for years. Its popularity in the ‘90s, when manga and anime were being promoted as the cool new thing, provided the impetus for an film adaptation in 1995.

With a cast of familiar b-movie actors, like Mark Dacascos and Mako, it feels like a step above your typical direct-to-video fare that cluttered the shelves of Blockbuster, but it’s by no means a “good” movie.

The same year also saw a Western-produced direct-to-video adaptation of a different Viz release, Fist of the North Star. The post-apocalyptic martial arts epic by Buronson and Tetsuo Hara didn’t make a successful leap to the silver screen, but a Japanese dub was voiced by the original cast of the animated TV show from the mid ‘80s. While the Japanese dub is no doubt the best part of an otherwise disappointing movie, it’s also notable for featuring that old guy from Star Trek Generations. And no, we’re not talking about William Shatner.

The late 1990s was an exciting time to be a Gundam fan in the U.S., with Bandai poised to bring the legendary series to English-speaking audiences for the first time. It was also Gundam’s 20th anniversary in 1999, and Bandai rolled out multiple projects to commemorate and cash-in on the event. Produced in Canada, directed by a Canadian TV director and starring mostly Canadian actors, G-Saviour was not quite the big-budget Hollywood spectacle that fans had hoped for. Oddly, the film carries no Gundam branding and the word “Gundam” isn’t uttered once throughout the entire thing. Shunned by fans, G-Saviour was rarely mentioned by Gundam otaku until the titular Gundam showed up in an episode of Gundam Build Fighters. If you’re itching for robot action, though, you’re better off rewatching Pacific Rim, as G-Saviour is genuinely terrible. 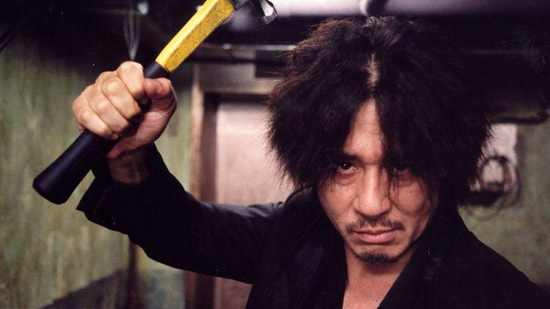 Perhaps the most critically acclaimed live-action adaptation is 2003’s Oldboy, directed by Park-Chan Wook, based on a manga by Garon Tsuchiya and Nobuaki Minegishi. It was successful enough that people rarely seem to recognize it as a manga adaptation, truly the mark of success, and has been remade twice. First, in 2006, there was an unauthorized Bollywood remake by director Sanjay Gupta titled Zinda. Then in 2013 it was remade, officially this time, by director Spike Lee, although this version was almost universally panned by critics.

In 2008 the Wachowski Brothers tried their hand at an anime adaptation, producing a film based on the ground-breaking cartoon series, Speed Racer. While it didn’t open with great reviews, the film’s merits have long been debated by anime fans, many of whom have praised the Wachowski Brothers’ efforts. That alone probably makes it worth watching more than most of these other films we’ve discussed and, hey, it can’t be any worse than The Matrix sequels, right?

On the topic of films not worth watching, the previously mentioned and much-derided Dragonball Evolution came out in 2009. Despite the kung-fu credibility of executive producer Stephen Chow, who was responsible for both Kung Fu Hustle and Shaolin Soccer, Evolution failed to succeed as a kung fu film, a comedy, or even a halfway competent adaptation. Heck, even Chow Yun-Fat as Master Roshi couldn’t redeem the project If it’ll be remembered for anything, and we’re not saying it will, Dragonball Evolution will go down in history as a perfect example of Hollywood getting everything wrong. 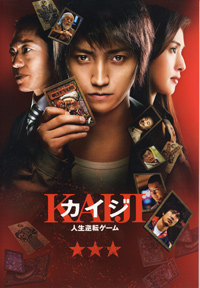 2009 also saw the release of a Japanese film based on Nobuyuki Fukumoto’s Kaiji manga, directed by Toya Sato. The film failed to capture the tense action of subtlety of the original source material, but it was successful enough to warrant a sequel, creatively titled Kaiji 2. Sato has made something of a career for himself adapting manga to the silver screen, directing the Kaiji sequel, an adaptation of Gokusen in 2009 and 2013’s Gatchaman. Plenty of other manga titles were tapped for adaptation around the same time by Japan film studios, including the 20th Century Boys trilogy and Detroit Metal City, both released in 2008.

Space Battleship Yamato, released in 2010, was an adaptation of the classic ‘70s sci-fi anime and garnered a considerable amount of hype in Japan and abroad. Driven in part by the long-term popularity of the franchise, especially among an older generation of Japanese, and the popularity of star Takuya Kimura, the film was better than most expected it to be. By no means a perfect adaptation, Yamato wasn’t half bad, but you’d still be better off watching the recent animated Yamato remake, Space Battleship Yamato 2199.

We won’t claim that this is any sort of exhaustive list, because there’s been dozen and dozens of adaptations over the years, but we chose the ones we did because they highlight just how wrong, or right, adaptations can be. With forthcoming live-action adaptations like Ghost in the Shell and the recently-announced Astro Boy on the horizon, we can assume that debates over the merits of film adaptation will continue in fan circles.

Did we miss any adaptations that you think are worth mentioning, good or bad? Let us know in the comments.

You Will Never Own Wonder Festival’s Motherload of Otaku Treasure
Feature Watch: Knights of Sidonia