Twenty years later, Escaflowne remains a unique vision worth exploring for yourself.

Imagine, if you will, the thundering power of giant robot anime intermingling seamlessly with a dreamy shojo-style narrative. Wait, you don’t have to imagine it, because Sunrise’s The Vision of Escaflowne exists! Whether you remember the series from 20 years ago or this is your first time reading about it, Escaflowne is back just in time for its big anniversary. Despite a few bumps along the 26-episode journey, the series holds up in its own unique way.

The concept of being magically transported to a fantasy setting is as tried and true as any, and the dependence on adapting light novels has made it an even more prevalent trope in recent years. Escaflowne, however, is an original anime that comes from the mind of self-described “vision creator” Shoji Kawamori—known for his work on the Macross franchise among many other celebrated anime projects—and director Kazuki Akane (Birdy the Mighty: Decode, Code Geass: Akito the Exiled). The goal they had in mind at Sunrise, the venerable home of Gundam, was to create a “josei robot anime,” and that actually sums Escaflowne up pretty nicely. 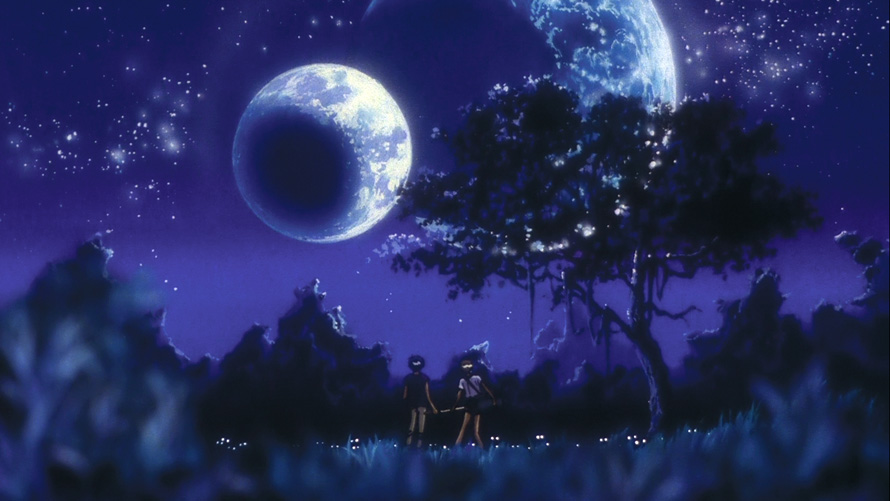 Hitomi Kanzaki is more or less your average school girl with a crush, spending her days running track, pining for fellow sprinter Amano, dabbling in a tarot card reading hobby, and wistfully discussing Amano with her friend Yukari. According to the series’ creators, fortune telling was popular in Japan at the time, so there was good incentive to include it in some way. Try as they might, though, Hitomi’s cards could never accurately prepare her for what would happen next, as a young prince named Van Fanel leaps into our world through a portal while attempting to slay a dragon. He succeeds with a little help, and before she knows it Hitomi is swept away with Van back to his world.

Gaea is a curious place. While it’s not a planet we can see from Earth, its denizens can clearly see Earth—or as they call it, the Mystic Moon—in the sky above. Hitomi is also different on Gaea. Precognitive powers that were latent at best back on Earth begin to bubble to the surface on Gaea, and she’s going to need every edge she can muster if she wants to survive a long-brewing conflict that’s finally coming to a head. 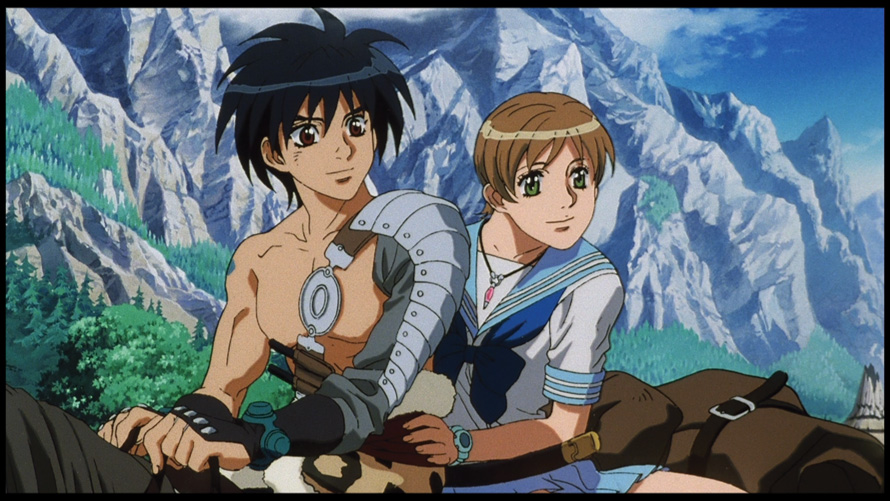 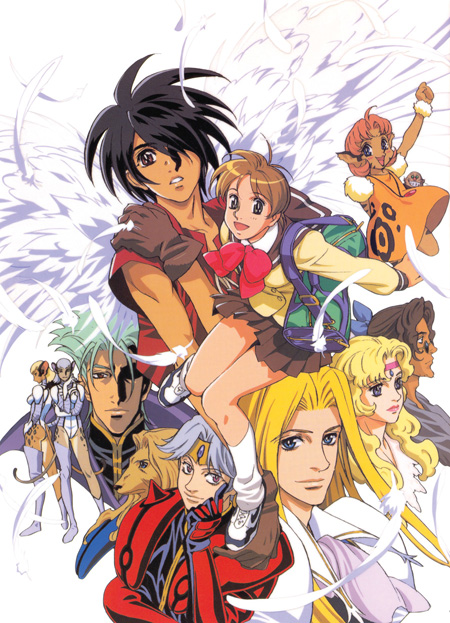 Van is right at the center of the burgeoning battle against the clearly nefarious Zaibach empire, and both he and Hitomi eventually, and at times begrudgingly, join forces with others on the right side of the war. Chief among these supporters is Allen Schezar, the lead bishonen of the series that serves as an uncanny surrogate for Hitomi’s crush back home. He even looks exactly like a blond version of Amano, the first of many hints that Gaea may be a giant, medieval mech-filled mirror of our own world.

Speaking of mechs, they’re abundant in Escaflowne, and their designs make them a perfect fit for the aesthetic of Gaea. From a visual standpoint, they’re more of a middle ground between Aura Battler Dunbine and Mobile Suit Gundam—more giant knight than complex, angular space suit. Mecha design in Escaflowne was a collaborative effort, featuring the work of Junya Ishigaki (Gundam Wing, Xenogears), Kimitoshi Yamane (Cowboy Bebop, Xam’d), Koji Sugiura (Gundam 0083: The Afterglow of Zeon), and Mahiro Maeda (Gunbuster, director of Blue Submarine No. 6). Escaflowne itself is a majestic, transforming beast of a mech. Whether it’s in bipedal mech or flying dragon mode, it’s always treated like a main character integral to the overall adventure.

And what an adventure it is. Escaflowne is full of intense duels and a healthy dose of melodramatics, and regardless of aspect ratio, its animation looks just as good today as it did back in 1997. It certainly isn’t without its faults, of course. As anyone who has seen it before will tell you, certain aspects of the story begin to trip over themselves in the second half. It’s like Kawamori had a huge, messy notebook for an outline and didn’t bother cleaning the whole thing up before committing it to the final script. There’s no point in spoiling every twist and turn, but you can sum its issues up with three words: Intensified Luck Soldiers. 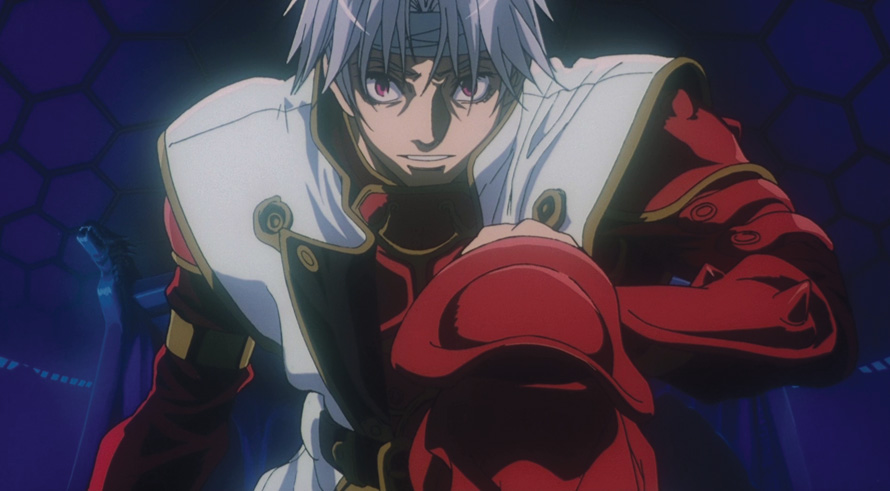 When developing an anime film based on an existing series, you typically have two options. The first involves creating a digest, or compilation film, that retells the story with a mix of existing footage and freshly animated cuts. The other option is telling an entirely new story. Kawamori and co. opted for a third, a hybrid of sorts, when working on Escaflowne: The Movie, which originally premiered in 2000.

The Escaflowne movie is an alternate universe retelling of the original story, created from scratch with a focus on keeping the essence of the characters intact. With gorgeous production at anime studio BONES (Wolf’s Rain, Fullmetal Alchemist, Space Dandy), director Kazuki Akane returns for more of the same … only completely different. Even the character designs by Nobuteru Yuki (Angel Cop, Orange) receive a significant overhaul, making the feature something special for new viewers and TV series fans alike. Seriously, even if you watched and only moderately enjoyed the show, you shouldn’t skip Escaflowne: The Movie. 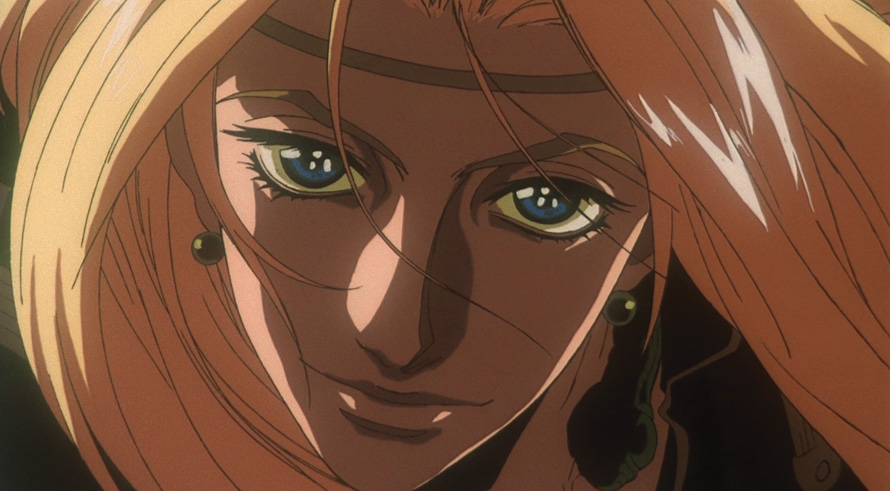 As a whole, Escaflowne is both trying and exciting. Exhaustion and exhilaration are generously doled out in equal measures, and it’s a good time to dive back into Gaea thanks to Funimation’s excellent Blu-ray/DVD combo release. Now, if we can just get a few more titles like this we can finally create the Shojo Robo sub-genre we all deserve.

The Vision of Escaflowne and Escaflowne: The Movie are now available streaming and on home video from Funimation.