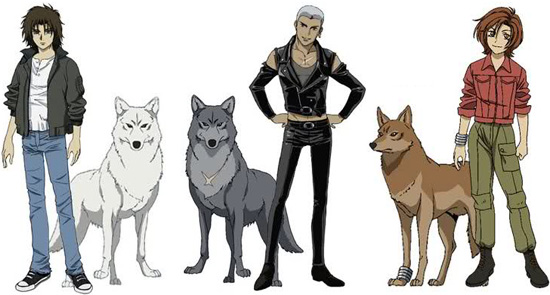 The world is a gray, decrepit place, full of unsavory types around every bend. There’s a stark contrast between your average geek on the streets and someone like, say, the Nobles, who fly in ships well above the muck and the mire. And then there are the wolves, which shouldn’t even be there in the first place. As far as everyone is concerned wolves were hunted to extinction a couple centuries ago, yet here they are, hiding right under humanity’s nose. Wolf’s Rain is their story, and it’s one worth revisiting nearly 15 years after it originally aired.

Though most people see them as humans, the principal wolves among us include Tsume, Hige, Kiba, and Toboe. Once they meet each other they end up forming a pack, sometimes begrudgingly, but always driven by the distant, ethereal hope of a place called paradise. This land of dreams is said to be a heaven of sorts for wolves, and the key lies within someone known as the Flower Maiden. Once Kiba and the rest of the pack actually run into the Flower Maiden—a girl named Cheza who was created alchemically from a Lunar Flower—their journey begins to have a purpose, but there’s still a long, long way to go before paradise can be attained. 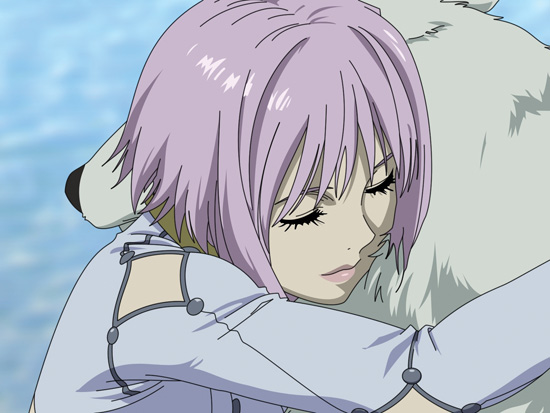 Wolf’s Rain is essentially a road movie (TV series in this case) with wolves. It’s a sizable trek and we’re by their side the entire time, from the moment they find each other to the moment they find, and then lose, Cheza and beyond. It’s easy to get lost in the melancholy of Wolf’s Rain. There are emotional peaks and valleys, of course; it’s not all washed out and hopeless. There are side characters with stories that are just as interesting, if not more so, than that of the wolves themselves. Gun-blasting action is doled out alongside heartbreak in equal measures.

This fine balance comes from the folks
at anime studio BONES; who else? Tensai Okamura (Blue Exorcist, Kuromukuro) does
a magnificent job as director, and the
script and story editing by Keiko Nobumoto
(Cowboy Bebop, Macross Plus) shows restraint when necessary and goes all out when it really counts. It’s really just a well-balanced, evenly paced series that’s hard to put down once you start.
The highs and lows wouldn’t be nearly as
satisfying without Yoko Kanno’s brilliant music. Many of the recurring themes carry the brunt
of the emotional payload, driving home key moments that, while stirring on their own, might otherwise not hit quite as hard. Manipulating emotions is one of the chief purposes of music in television and film, but it’s worth reiterating that Kanno is exceptionally good at it. And that opening theme? MUAH. 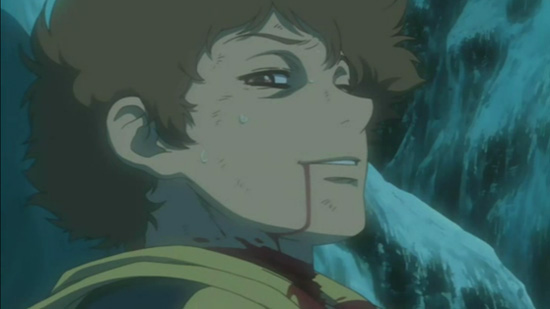 While Wolf’s Rain ran for a full 26-episode season, it’s worth noting that a whopping four episodes are recaps. That’s four episodes in a row (15-18, specifically) that you’ll need to chug through … or skip entirely. Each one is from the perspective of a different character, but that doesn’t mean it’s okay. All these recaps serve to do is break up an otherwise gripping tale right when things were really heating up. Four OVA episodes were produced after the series aired, and they’re all included in Funimation’s complete set. The fact that they add to the conclusion of the series kind of makes up for the recaps.

The series looks fine on Blu-ray, but the muted colors don’t really offer much of a showcase for the release. That’s alright because it’s all here, and Wolf’s Rain is very much worth watching again in 2017. If this is your first time with the pack, you’re in for a real treat.

One in Four Anime Studios in the Red, Says Report
[Review] Ghost in the Shell 2: Innocence