One in Four Anime Studios in the Red, Says Report 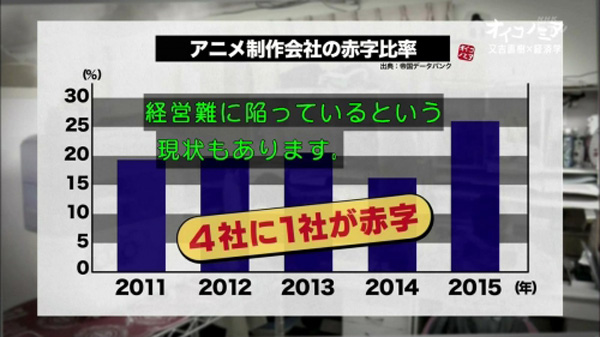 Despite a rise in the number of anime titles and overall industry profits, one out of four anime studios is experiencing net losses, according to a Japanese television report.

That surprising figure was featured on an episode of Oikonomiya, a show on Japanese broadcaster NHK, which delved into the current state of the anime industry.

The episode also featured residents of the Tokyo Animator Dormitory, who spoke to host Naoki Matayoshi about the financial problems faced by young animators. Numbers discussed: 80% of animators quit within their first three years, and average wages for an in-between animator come out to about ¥60,000 ($540) a month.

Perhaps the most explosive number: animator Tetsuya Akutsu revealed he had once spent five hours on a frame for which he was paid ¥200 (under $2).