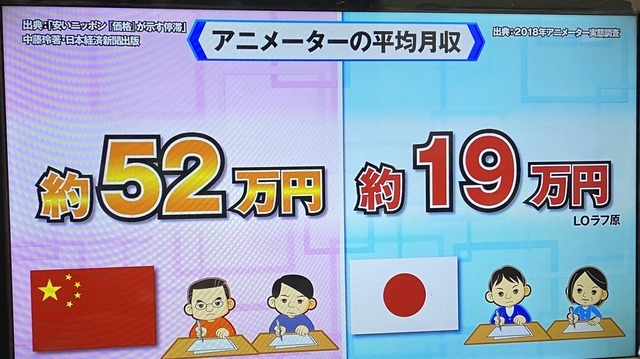 Another week, another depressing story about the Japanese animation industry! Okay, this info isn’t particularly new, but it’s making the rounds again thanks to being shared on a Japanese TV show.

The show compared the average yearly salary animators in China and Japan. On the left, we’ve got China, with about 5.2 million yen a year (about $40,700 at our current bizarro exchange rates).

Meanwhile Jun Arai, a veteran key animator, chimed in on Twitter to say:

That’s… a lot more. It’s no wonder that more Japanese animators are taking on Chinese projects, with some even moving to China (though it should be noted that the linked story was from the pre-COVID era).