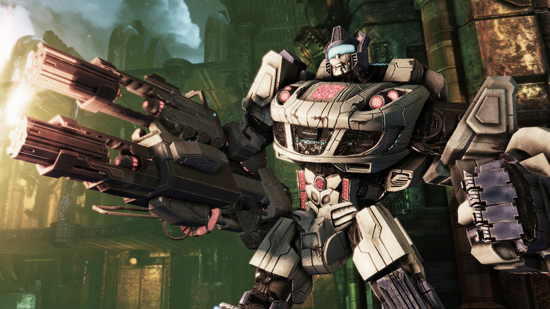 Transformers: War For Cybertron set a fantastic precedent for what could end up as the absolute standard for all future Transformers games. Its frenetic combat, willingness to adhere strictly to the ‘bots we loved as children, and explosive campaign acted as benchmarks for how developers should approach such a recognizable and beloved license. Transformers: Dark of the Moon hit shelves just in time to bridge the wait between the next Michael Bay sequel and any other brand new Transformers media fans could hungrily devour.

When it failed miserably as an exemplary Transformers adventure, gamers yearned for the continuation of High Moon Studios’ majestic entry into the Transformers lore. High Moon’s swift return to form resulted in Transformers: Fall of Cybertron, a slick love letter to that magical time in the ’80s where you were either an Autobot or a Decepticon, and you stood up for your faction. You never missed an episode of the cartoon series, and you thought the movie’s “Dare To Be Stupid” montage was impossibly cool. Fall of Cybertron succeeds where horrific movie tie-ins could not, delivering a raucous and relentless ride through a dual campaign as both Autobots and Decepticons. Oh, and there’s a lot of explosions. 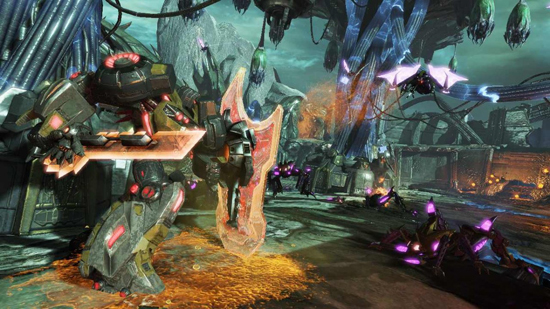 War For Cybertron felt mainly as though Gears of War had undergone a re-skinning to more properly resemble the infamous metallic crew, and thus it clung to its third-person shooter roots tightly. Fall of Cybertron would have you believing the same thing, until things really start heating up. Vehicular combat, frenzied runs as a giant fire-breathing robot dinosaur, and helicopter firebombing act as the Decepticons’ calling cards, and in a big way. While a sizable chunk of the Autobot campaign finds players excavating the broken shards of enemy strongholds and picking up the pieces of their fallen home world, the halfway point ditches these pretenses and cuts straight to the heart of a balls-out action fantasy. If Lollipop Chainsaw teased gamers with magical, sparkly glitter and gore, Fall of Cybertron is an explosion of steel, fireworks, and scrap metal hurtling through the air like some kind of horrific ballet.

A hearty combination of linear “run here, shoot that, pull this switch” and “hop into this behemoth and annihilate each and every one of your enemies” missions heads up the campaign, ensuring they sprinkle what could very easily stagnate as a vanilla third-person war game with squee-worthy references to the classic ‘toon and comics to keep even the casual Transformers fan coming back after each checkpoint. You’ll blaze through a gaggle of Decepticons from the first mission as Bumblebee, wreak havoc on ground units as Vortex in helicopter form, and cruise around in some sweet rides once the option to swap from robot to vehicle form becomes available. There’s a fleeting sense of open-world freedom once you’re free to transform at will, almost as if you’re still sitting on your bedroom floor playing with your Optimus Prime toys, concocting brand new adventures and transforming where and whenever you please. And while some enclosed spaces force you to contain those desires, the fact that you can is enough to keep you pressing onward to victory. For which side? That’s up to you. It is, in the end, your Transformers fantasy. 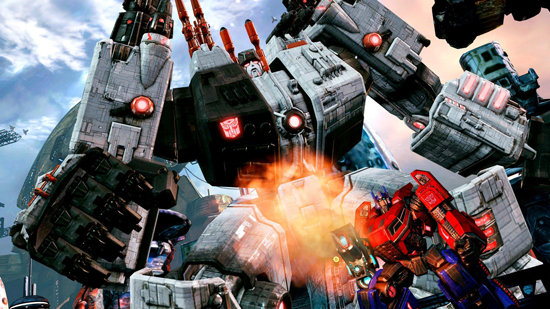 It’s unfortunate then, that unlike War For Cybertron, you’ve even less opportunities to experience the campaign with friends. Perhaps one of the most anticipated modes of play, vanilla co-op, is inexplicably absent, replaced by ho-hum co-op objective-based play and class-based competitive multiplayer. So few triple-A releases offer this option that Fall of Cybertron suffered tremendously in the “friends” department as a result, and it’s a shame since the explosions are twice as big and twice as satisfying this time around. The multiplayer options included are solid on their own, but honest-to-goodness campaign completion with a comrade almost seemed like a no-brainer for a game that wears its nostalgia so proudly on its sleeve. Surely including friends should have been a priority.

Still, there’s so much ridiculous, over-the-top fun to be had within High Moon’s latest that it’s hard to fault it for forgoing a modern nicety we’re a little spoiled by. The campaign, while relatively short, is oh so sweet, and jam-packed with moments here and there that any Transformers fan young or old should be thrilled to take part in. Grab your favorite Soundwave PJs, round up some Jiffy-Pop, and roll out for a good time that’s leagues more than meets the eye.

Third Berserk Film to Open in January
On The Shelf – September 5, 2012