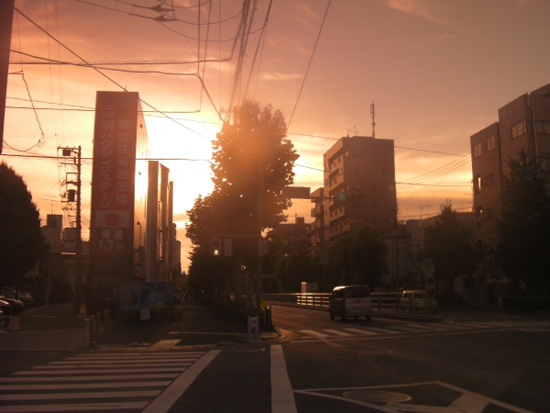 Outside: the devil himself would recoil from such heat!

Document one: “Prelude to the Japanese Islands Fragmentation Plan”
Oh hey. It’s Patrick.
Hello from the floor of a tiny shower/bathroom in an apartment somewhere on the west side of Tokyo.
Welcome to my office, my lion’s den, my E-Z-to-clean think-tank with the requisite “wacky” washlet toilet and a tiny tub not at all suitable for my gangly gaijin body. This is where the magic happens… where the final pages of the October/November issue of OTAKU USA were actually edited, corrected, and submitted for our esteemed publisher’s approval and your eventual purchase thereof. 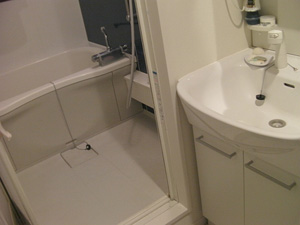 To you, this is just another shower/bath combo. But to me, it’s the bridge of a BRAVE SPACE BATTLESHIP!

So what am I doing here, both in Japan and in a bathtub? I seem to be asking this question a lot lately. Well, I’m in Tokyo for a few weeks, ostensibly here to participate in a seminar at Meiji University. I figure the OTAKU USA website would be as good a place as any to document the days ahead in any effort to help myself understand why my life has come to writing on the floor of a bathroom. So far, the following conclusions have been reached:

Summer’s in the city and you can feel the heat coming off the street, primarily everywhere else in this apartment. But for some reason, this bathroom here exists in a time/space anomaly where harsh Tokyo daytime temperatures have little to no influence. So here I sit waiting for nightfall, when the mercury drops a bit and I can fight crime in the guise of my alter ego MOONLIGHT MASK .
It’s A LOT cheaper in here in the can than going someplace else to write, like that overpriced-but-stylish pasta café near the JR station. Now normally, I like to throw around “moolah” and “lootcakes” like a hillbilly who’s just won the Publisher’s Clearinghouse Sweepstakes and cashed the check, but a current global economic crisis and a catastrophic Yen-Dollar exchange rate have a dramatic way of changing one’s priorities. So if I’m going to splurge on luxury
purchases of vintage issues of Animage and stacks of Japanese superhero and monster DVDs, I’m going to have to pass on the lukewarm spaghetti for a bit. 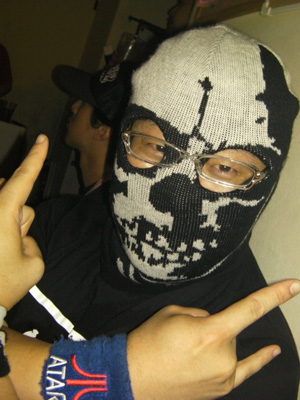 Coming soon: the wall-shaking secret of THE SKULL MAN!

Jet lag does weird things to me beginning with (but not limited to) temporary insanity. Since I’ve only been in Japan for a few days so far, my experience has largely been a blur of either trying to sleep, not sleeping, and then kind-of-but-not really sleeping for a few hours at a time (luckily, there’s a steady rotation of ‘80s anime like Urusei Yatsura and Kiteretsu Daihyakka on Tokyo MX TV to entertain me). In the resulting state of cuckoo clock like craziness, I can’t be 100% responsible for my actions anymore.

And yet, I must now leave my hovel to venture out in the blast furnace-like heat for food, folks, fun, exploring the city, and bringing back savage tales of otaku-ery for you to enjoy. I promise that the next post here will be at least slightly more exciting than pondering the bathroom floor… but I can’t promise that it will be written someplace else.
Patrick Macias is the editor in chief of Otaku USA magazine.
Otaku Life 345