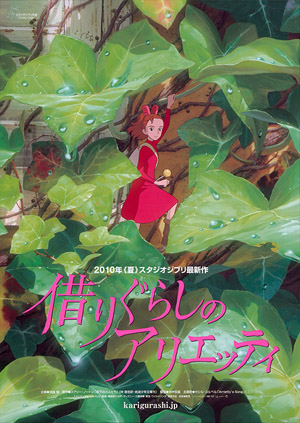 Ever since Spirited Away took the Oscar in 2000 for Best Animated Picture, Studio Ghibli seemed to have hit a creative doldrums. Howl’s Moving Castle was pleasantly forgettable, Tales from Earthsea was execrable; and Ponyo was overall delightful but disappointing for those expecting something meatier. Now, two years later with Karigurashi Arrietti, Miyazaki has once again gotten off the director’s chair. Perhaps learning from Earthsea the folly of forcing a dynasty, here he is content to merely write the script and supervise the production helmed by first-time director Hiromasa Yonebayashi.
The credits state that this is based off of Mary Norton’s The Borrowers, but as is par for Ghibli’s “adaptations,” any search for faithfulness is to be in vain. Sure, the core concept is the same: a family of tiny people—Father Pod, mother Homily and the titular daughter Arrietty—live under the floorboards of a home and “borrow” small things like blocks of sugar and cookies to make their tea and bake their bread. However, their existence is a fragile one—they must never allow themselves to be seen by humans or else their lives would be in danger at humanity’s cruel curiosity.
Otherwise, the British original has been given a massive Ghibli makeover. In addition to moving the setting to the Tokyo suburbs, the family itself has taken all the qualities of the modern Japanese household: Pod has become a stoic salaryman, except instead of working for a multi-national, he goes spelunking for food and new decor. Homily is a worrywart housewife who boils a mean cup of tea and dreams of someday living by the sea, for now content to stare at her window curtain of an oceanside. No points for guessing that Arrietty is made into the standard-issue Ghibli heroine—attractive and rambunctious but full of wise-beyond-her-years wisdom. No points either for guessing that she makes an impossible romance with a regular human boy.
But to paraphrase Ursula K. Guin’s opinion on Earthsea, this isn’t Norton’s book. This is Honebayashi’s movie and it singlehandedly brings Ghibli back in prime form. While not among the ambitious visual extravaganzas that have formed Ghibli for much of the past decade, it manages to hold its own. The world of the borrowers is brilliantly realized and full of clever touches. The house alone is a feast for the eyes, full of small details—postage stamps provide for decorative framed paintings; the gutter drain provides a way to air and dry out laundry.
Special mention should also go the sound design which is possibly an all-time best for Ghibli. As Arrietty’s family go exploring through the house, everything becomes appropriately amplified to their level – the hum of a refrigerator becomes a menacing bellow and marching ants can be heard clicking their antennae and pounding their feet at each other. Further credit should go to the fantastic Celtic soundtrack by first-time composer Cecile Corbel. For a movie that is basically about wingless faeries, it provides the perfect icing on the cake. While some attempts to channel Joe Hisaishi are present, the frequent electronic backbeat mixed with the strings provide a more modern and ethereal sound that hopefully will make this not the last we hear of Corbel in the future.
That all being said, Ghibli has never had a shortage of intriguing visuals and entrancing sounds. What has truly been missing these past years has been that most important of Planeteer elements: heart. Thankfully, here we have a film loaded with understated emotion and a beautiful, cautiously optimistic understanding of humanity that has been lacking in so much of their recent output.
Many have wondered how Hiromasa Yonebayashi, at 37 the youngest director for Ghibli film, would fare. In short, his direction shows maturity and restraint. I’ve heard that there is a habit for animators-turned-directors to over-do things in an effort to use their newly gained powers. Yonebayashi instead wisely focuses more on quiet character beats than on flashy spectacle. Subtle shifts in the eyes and the way a person opens a letter matter more here and the movie is stronger for it.
In particular, the central romance between Arrietty and the gentle boy Sho takes its time to develop and is beautiful to watch unfold. Sho is dying from a heart condition and Arrietty’s people might well be facing extinction, yet they both must keep pushing on. Their interactions are full of delicate body language and unspoken words, but bereft of schmaltz. Despite of that glaringly obvious fact, it managed to make this grown man shed tears. It’s charming enough for children, romantic enough for adults and thoughtful enough for either.
Features 745Studio Ghibli 177romance 166