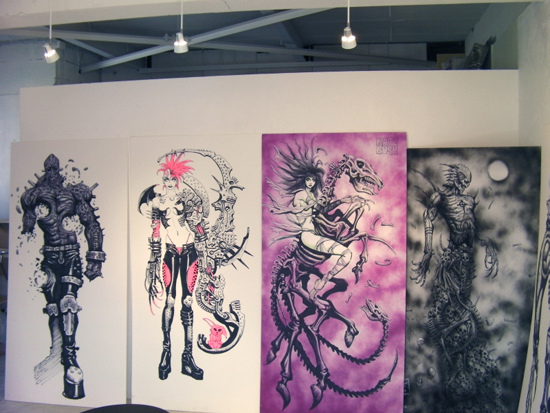 *Spoilers* Being sick on your own in Japan can be a drag. I know the hard way because that was me a few weeks back, suffering the slings and arrows of outrageous food poisoning, laying in bed wishing someone else could go and get me some food and medicine. But when I closed my eyes—which was quite often—I saw the face of Antonio Inoki, mocking me, DARING ME to shuffle over to the pharmacy near the train station for a showdown with destiny. So I got up and did my very best zombie-like gait out the door and somehow made a round trip with nearly all my marbles intact. And what a haul I brought back with me! It included: The biggest bottle of Poccari Sweat I could find (essential for any hard-luck situation), some nasty over the counter stomach medicine, a pack of Bufferin aspirin, three bottles of fun re-hydration fluid endorsed by the World Health Organization, and that quintessential Japanese sick-bed delicacy: instant miso soup procured from an elderly clerk at 7-11. 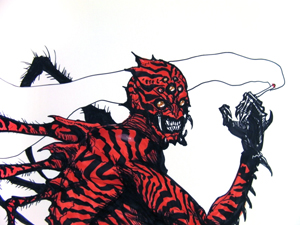 With ammunition like that, I suppose I shouldn’t have been shocked to discover that I actually felt a bit better the next day. Enough so to finally venture out further past the local convenience store. Indeed, it was time to start doing some activities worthy of the mantle of “Editor in Chief of Otaku USA magazine”!

So I took the train to the Asagaya ward to get a gander at a gallery exhibit by Yasushi Nirasawa. One of Japan’s all-time great fantasists, Nirasawa has contributed character and creature design to such pop culture landmarks as the Final Fantasy game series, Godzilla Final Wars, and the blockbuster hit series Kamen Rider Den-O. Toy punks also know his name well as a model maker and sculptor whose creations have graced a bevy of products for the Fewture company, including his take on Go Nagai’s Devilman gang.

Of late, Nirasawa has been holding court at Asagaya’s Hakusen gallery, doing live drawings on large poster board in front of an appreciative audience. The finished artwork then resides in the gallery for sale until Nirasawa returns for another session of what has come to be called “NIRAISM”. I arrived in the aftermath of Nirasawa’s 4th session. The man himself was nowhere to be seen, but he’d left behind 6 or so striking creations in pen and colored ink. 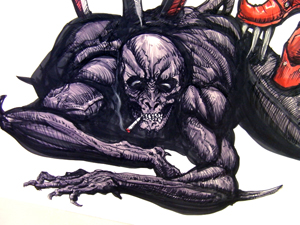 I immediately recognized Guillotina, Nirasawa’s original character and a red-haired spitfire of a deadly female demoness who predates SEGA’s Bayonetta by many moons. The devil in the details: nearly all the ghoulies in Nirasawa’s bestiary bore evidence of some very bad habits. Cigarettes, wine goblets, and beer bottles dangled from bony fingers. And yet there was contrast as well. One ogre appeared to be gently carrying a bento lunch box. A pink bunny like critter peered out from an instrument of destruction.

While all of Nirasawa’s artwork on display made a bold impression, especially when they filled nearly five-foot canvases, the gallery owner saved the best for last. He gave me a sneak peak of a true masterpiece; a large work by Nirasawa called “The Last Supper”. But instead of kindly apostles, Nirasawa had filled in the blanks with the likes of Rob Zombie, Gene Simmons, Marilyn Manson, and Alice Cooper perched in front of a table lined with skulls, eyeballs, hard booze, and even a stray cheeseburger! If only I’d eaten food catered by these folks instead of Antonio Inoki! No matter. You may now behold this wall-shaking work here. 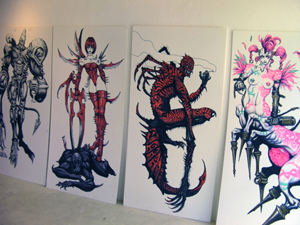 Nirasawa’s Monster Mash is the hit of the land.

But even as I sit and type this, a new session of NIRAISM, complete with daily live drawing, is currently in session from 8/26 to 9/12. The theme this time is “Villains”, but please don’t boo or hiss.

Up next on the Tokyo Terminal Diary: a trip to Akihabara (perhaps you’ve heard of it?)!