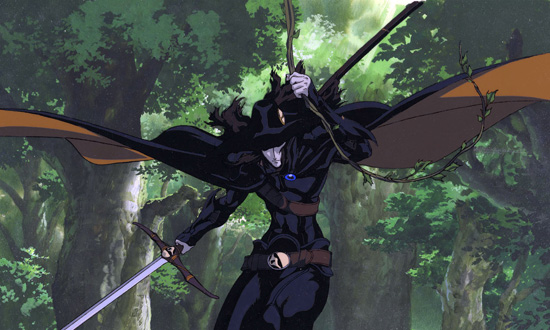 Many years ago, when I was a lowly assistant-manager-in-training at Video USA Store #16 in Tarpon Springs, Florida, my supervisor, Stacy, once told me something profound. As we discussed film as an art form, Stacy looked me square in the eye and said, “Paul, sometimes you just want to watch a movie about a guy kicking the maximum possible ass.”

At the time, she was referring to Blade II, but the same principle applies to another movie about a half-human, half-vampire monster hunter who fights with a sword.

I’m referring to Vampire Hunter D: Bloodlust, a 2000 film written and directed by Yoshiaki Kawajiri. Bloodlust is a sequel of sorts to the seminal Vampire Hunter D, one of the formative Streamline Pictures releases that I used to see a VHS copy of in every video rental store, back in the days when there were still such things as Streamline Pictures, video rental stores, and VHS. 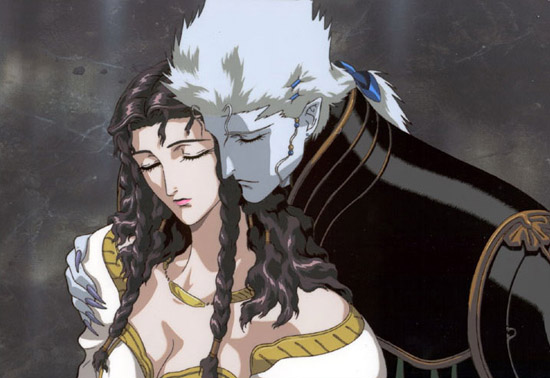 Because each Vampire Hunter D anime is based off of a different entry in a series of novels written by Hideyuki Kikuchi, and because each tells a standalone story, no previous knowledge of the titular character is necessary. Plus the original OVA kind of sucks, pun most definitely intended. All that you need to know is that D is a “dunpeal” (a horribly mangled transliteration of “dhampyr”), meaning he’s the offspring of a vampire and a human being. D wears a big hat. He carries a long sword. He rides a cyborg horse. He works with a wisecracking, magical parasite that lives in his left hand. He kicks a maximal amount of ass.

In Bloodlust, the taciturn D must brave the horrors of the post-apocalyptic wasteland to rescue Charlotte, a young lady kidnapped by the sinister vampire lord, Meier Link. But if magic and mutants weren’t enough to contend with, D also faces competition from the Marcus brothers, a gang of unscrupulous bounty hunters that will stop at nothing to collect their pay. Backbiting and betrayal aren’t the only complications, either. Charlotte doesn’t want to return to her family, and she and Meier intend to elope with the aid of a powerful patron that happens to be not just a vampire but a ghost as well.

Can D disrupt the plans of the pair of star-crossed lovers, or will their love literally cross the stars? Will Charlotte and Meier make it to Carmilla’s castle, an enormous structure composed entirely of Gothic arches and flying buttresses, that in its spare time doubles as a rocket ship for launching vampires into space? 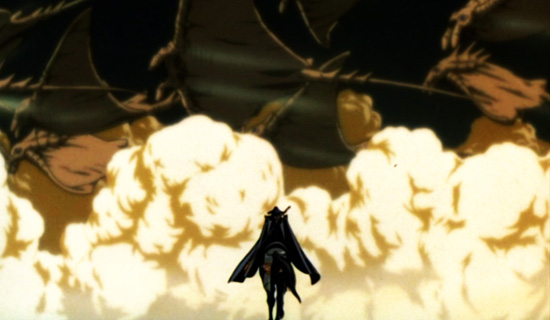 Vampire Hunter D: Bloodlust is a great little film. The visuals are gorgeous, the action set pieces are fun and imaginative, and the film even manages to be strangely sentimental in places. But don’t let the Gothic / Romantic trappings fool you. There’s more to Bloodlust than love and vampires. There are also zombies and werewolves and laser-spewing ghosts, and most of these things end up on the receiving end of a half-immortal hunter with a very big sword.

This is not to say that the film is perfect. It’s not. No single element shows its age quite as obviously as the English language track. Originally intended for a wider American theatrical release, Bloodlust was dubbed in English first, with a Japanese language track following later. Urban Vision originally planned to release a special edition DVD with both language options, but those plans never materialized, so we’re stuck with the English version of the film. And the English language version is clunky. The script is obtuse and wooden in all the wrong places, suggesting that the dialogue was translated from Japanese but not polished enough to make it sound smooth and natural to the American ear. Exposition abounds. Characters suffer from Speed Racer Syndrome, as they explain themselves over and over again in a desperate attempt to keep in tune with the lip synch: “You must not interfere with our love, vampire hunter, ha ha! Now I must kill you and you must die because I must kill you, so you can’t interfere with our 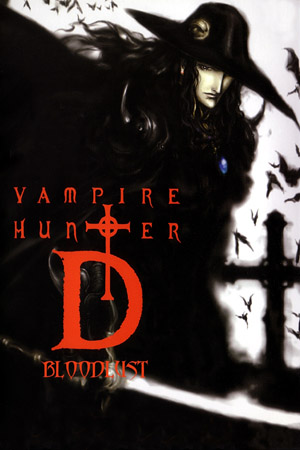 love, ha ha!” I’ve heard rumors that this English language dub was merely a temp track intended to tide investors over until a new dub featuring famous Hollywood talent could be produced, but whether there is any truth to this notion is unknown.

And now it’s twelve years later and too late to learn the truth. Bloodlust’s American distributor, Urban Vision, has turned to ash and scattered to the four winds, annihilated by the harsh sunlight of changing economic realities. Although it’s still possible to rent the movie on-demand for a measly three bucks, DVD copies of Vampire Hunter D: Bloodlust command usurious prices on Amazon. My copy remains in the Vault, hibernating in a tiny, plastic coffin, awaiting an opportunity to once again rise from the grave—a creature of a bygone era—and prey upon the hearts and minds of later generations who might not yet know the pleasures of a movie in which many a vampiric ass was kicked.

One Piece’s Nami TV Special Gets New Commercial
On The Shelf – August 8, 2012