The Second Season of Nisekoi is “Steady As She Goes”

“Fake it till you make it.” A blunt, somewhat cynical piece of advice, not always wise to follow, that you’ve surely come across before. If, for example, a timid fellow were to put on a show of confidence for an extended length of time, perhaps it would dawn upon him one day that, along the ride, he has transformed into a genuinely confident individual.

An amusing quirk of the human brain, it is, that a game of pretend can morph into reality. However, for better or worse, this need not be a conscious effort with a desired result in mind, and it is that blurry line, where living a lie turns into living your life, that is inadvertently straddled in Nisekoi:, studio Shaft’s second go at animating an artificial romance that throws all parties involved for a loop and a half.

That’s no punctuation snafu you see there; the sole difference in title between the first season of Nisekoi and the second is a dangling colon, which is confusing given that the franchise frequently has the subtitle False Love tacked on in the Western world, which, in fact, is merely a translation of “Nisekoi.” At the cost of adding a couple dots comes the subtraction of eight episodes, as Nisekoi: wraps up at 12, compared with the first season’s 20. This is of little concern, though, since, like the original batch, the episodes of Nisekoi: offer no story progression of significance. 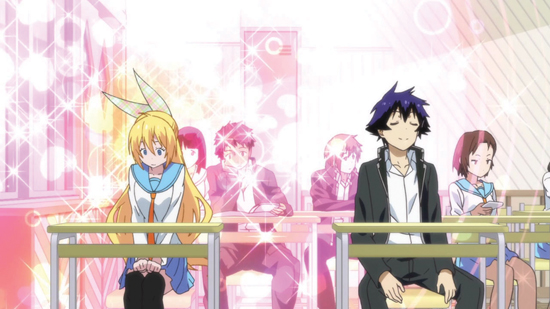 Raku Ichijo, son of a powerful yakuza boss, and Chitoge Kirisaki, daughter of an opposing syndicate’s head honcho, are fast approaching the one-year mark of their staged, and strained, relationship, the only thing maintaining a fragile peace between their clans. But, while this arrangement was planned to subsist for the duration of their high school years, the end is still far off. Also unchanging is Raku’s adoration of his soft-spoken classmate Kosaki Onodera, who similarly anguishes over presumed unrequited love, completely oblivious to Raku’s mutual feelings, as he is to hers, despite how transparent their wants are to the eyes of any onlooker.

What has wavered is the show’s commitment to the mystery of Raku’s locked pendant, which has largely been kicked to the curb in Nisekoi:. As the tally of ladies hitched aboard the Raku Train increases, it grows exceedingly apparent that the question of who possesses the key to his childhood keepsake, and thus shared vows with him to eventually wed as adults, will not and cannot be answered, short of a convoluted cop-out, lest the series screech to a halt and anger fans of the girls not “picked.” In this manner, the second season of Nisekoi opts to, alternatively, focus on traditional harem genre trappings and the slapstick comedy and visual gags that come with the territory. 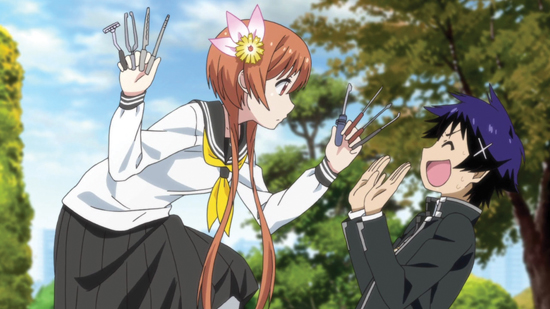 Nisekoi: continues the trend of branching out from the two most prominent female cast members, as well as further developing those who debuted later on in the previous season, namely Marika Tachibana, who is so utterly obsessed with Raku that she’d be slapped with a restraining order under normal circumstances. Screen time is divvied up among the girls, such that one could easily partition the show into “Chitoge episodes,” “Marika episodes,” and so forth.

This structured approach is set aside for creative deviations on occasion—the introduction of Kosaki’s younger yet overprotective sister, Haru, who is convinced that Raku is a cad, turns the “Onodera eps” into a tag-team affair, and long-shot love interest Seishiro Tsugumi, acting as Chitoge’s bodyguard, reunites with a compatriot, the assassin Paula McCoy. Even Raku’s best bud Shu Maiko, a heretofore one-note background character, receives some welcome exposition. 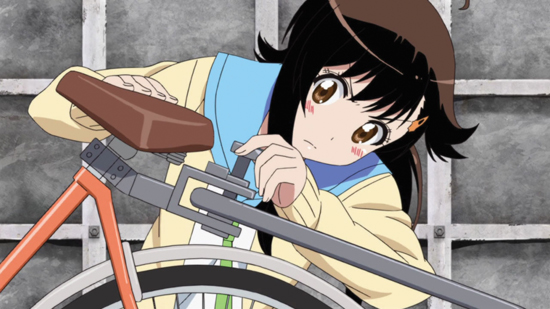 However, the highlight of the season comes in the form of the “Magical Pâtissière Kosaki” vignette, a playful diversion in which Nisekoi: quite literally transforms into an entirely different show, one of the magical girl genre, revealing the roots of series director Akiyuki Shinbo, famous for his work on Puella Magi Madoka Magica.

On a technical level, Nisekoi: retains the standards set by the prior season, in that it remains a highly polished product, both visually and aurally. But it is less distinctive, or, for a more positive spin, less distracting, as it has cut down on the superfluous flourishes so oft splayed across the screen in the past. That said, Raku and company pursue their education in what can only be called an architectural marvel, and dramatic viewpoints and deftly employed lighting enhance the emotional impact of events. 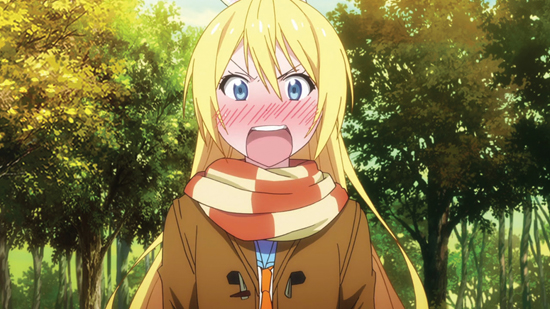 Even Mother Nature cooperates with our crew to properly punctuate each scene, and the score, through its wide variety of musical stylings, sets the mood as well. Another accolade must be bestowed upon the ending sequences and their accompanying vocal themes, of which there are a whopping seven, giving each gal her time in the spotlight, even minor cast member Ruri Miyamoto, who typically exists solely to be Kosaki’s wingman and Shu’s foil. Attempts to account for all possible fan favorites are rarely so pleasantly thorough.

“Steady as she goes” would be an apt phrase to describe the course of Nisekoi:. The lack of plot advancement will undoubtedly frustrate some viewers, but this is a series about savoring the journey rather than reaching an end point. Thus, enjoyment of Nisekoi: hinges on to what extent one can tolerate characters who can’t take a hint or spit out their feelings, instead allowing misunderstandings to fester and multiply until they become insurmountable obstacles. Those with the patience for such floundering can delight as the pretense is taken to new ludicrous heights, evolving from faking love to faking fake love, no less. Sorting fact from fiction can be no small feat, but the challenge makes life, and anime, just a tad more interesting. 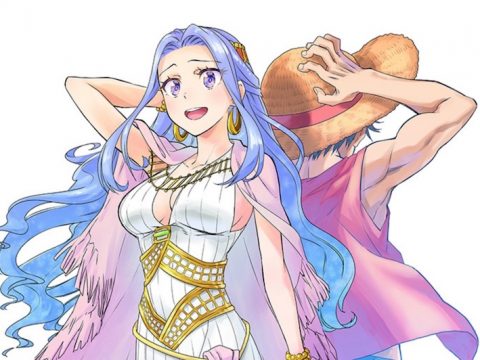