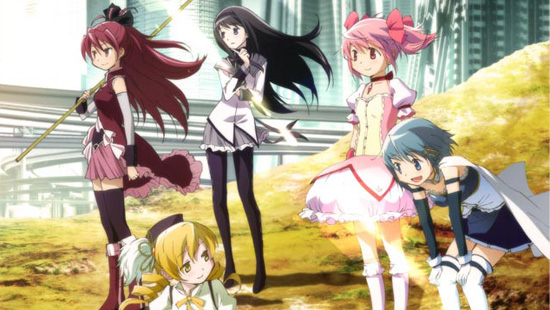 Hyped across the board as “the next Evangelion,” the brilliant Puella Magi Madoka Magica certainly has turned heads since it aired at the beginning of 2011. So it was no surprise when animation studio Shaft and series director Akiyuki Shinbo announced that they would be releasing theatrical compilations of the television series in two parts, not to mention a third film with a brand new storyline continuing off from where the show had ended.

Compilation films are nothing new in anime – they’re sort of expected now whenever a series is successful. These digest versions of TV series are usually redundant in terms of material for existing fans of a show, so discussion on them always ends up focusing on whether or not they’re worth watching. This is tricky when talking about Puella Magi Madoka Magica The Movie.  With a combined running time which isn’t much different from its television equivalent, the two films, Part 1: Beginnings and Part 2: Eternal, can hardly be called “compilations” – the entire series is left, for the most part, intact.  Obviously, some scenes are cut, and others shifted around, but unlike many other compilation films, the two Madoka films never seem rushed or heavily edited, which makes sense, considering that the original show is a mere 12 episodes. Unfortunately for existing fans, this also means that there is hardly any space for new material. 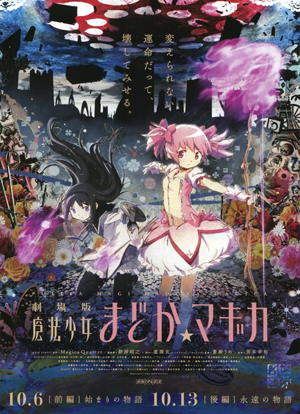 Apart from a brand-new opening sequence (which, for anyone who knows Madoka‘s ultimate fate, will prove heartbreaking), new transformation sequences for each of the girls, and one brief scene in Part 2, there are no new shots – don’t expect any “director’s cut” versions of episodes with new scenes here. The other changes are mostly minor aesthetic changes even the most hardcore of fans will have trouble noticing. Some foregrounds and backgrounds have been tweaked, and musical cues have been amped up and shifted around for better transition between episodes, but that pretty much ends the list of changes. It’s strange because these sorts of compilation films are usually opportunities for the creators to do ret-cons or setups for future stories (the Gundam movies and Evangelion: Death & Rebirth come to mind), yet the two Madoka films do neither of these.

It’s important to note that one of the appeals of Puella Magi Madoka Magica is in its episodic, “I wonder what happens next” nature. The slow revelations that smack you in the face just when you thought you were watching some cute, innocent show about magical girls, is what made many people keep coming back week after week. Unfortunately, the impact of these cliffhanger endings and revelations aren’t as strong in a feature film format.

One of the series’ most compelling moments, Homura Akemi’s origin, ends up seeming more like a digression than a revelation. And right after finishing the Sayaka subplot, the second film haphazardly introduces the story through some transitional animation (and returns to the main plot after one of the most awkward use of an opening theme ever).  These transitions from one storyline to the next seem jarring. Madoka has a very linear storyline, divided into chunks devoted to each character. Each character’s story is resolved one at a time, and in a serial this method is effective because the viewer gets a chance to breathe. But when thrown together it seems mechanical and awkward at times.

Despite all this, these two Madoka films should fine for any curious first-time viewer.  The films keep enough of the original to feel like a fleshed out, full experience.  The story and ideas introduced are still compelling, and upon viewing you are reminded of everything that made the show so fantastic in the first place. But you have to ask yourself: why watch compilations of a TV show when the original is about the same running time anyway? 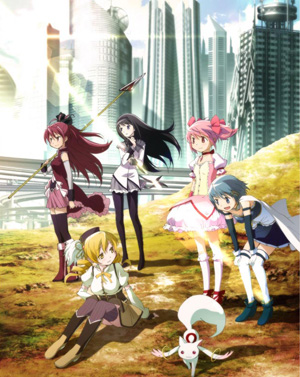 In an interview, director Shinbo said that he hoped that these compilation films will provide an opportunity for mainstream audiences to enter the world of Madoka. This makes sense, as a feature film in theaters across the country will no doubt have more exposure than a show that originally aired past midnight (not to mention it’s easier to rent two DVDs rather than six, which is the number of discs for the TV series). As of now, however, anyone who sees these two films are more than likely those who have already seen the TV series anyway.

Whether Madoka has a life beyond the current otaku zeitgeist and can reach the heights of a Gundam or an Evangelion depends entirely on the exposure of these two films and, of course, the impending third film.  If Madoka does reach those heights, these films will have served their purpose for being gateways into the franchise. In that case, the ultimate answer to which version – the TV series or the films – is “better” will come down to whichever one you saw first, which high praise indeed for an anime compilation film.

On The Shelf – October 17th, 2012
One Coin Challenge: Halloween Edition