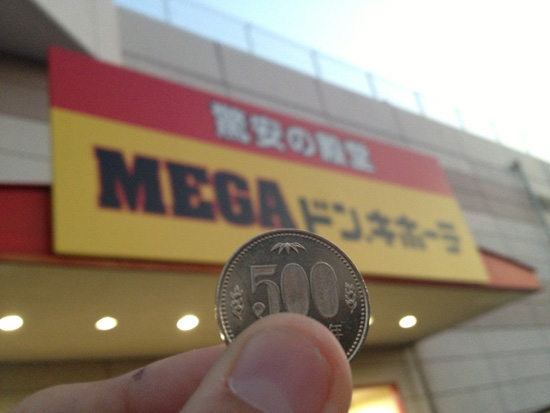 Ah, Don Quijote. When I first arrived to Japan, I was impressed that so many people knew of Don Quixote, the famed Spanish work of literature, thinking that it was sign of how cosmopolitan the island nation could be. Alas, the reason people knew of it was just because it was Japan’s answer to Trader Joe’s by way of Wal-Mart, Don Quijote. A massive warehouse of odds and ends organized with no particular logic, where the toiletries roam free next to groups of fans blowing into a display of jeans across from power tools sitting across from groceries. This is the kind of store that displays decorative crickets next to the fruit. Let that simmer in your mind.

So it seemed only logical to take Otaku USA‘s One Coin Challenge to the anarchic aisles of my local Donki. Why my small town, with a population barely scratching 60,000, was deemed worthy of one is anyone’s guess, but I’m okay with it. Especially come Halloween, when Tokyo’s Donkis are stuffed full of all sorts of random crap – fake rusty chains, swords, skulls upon skulls and whatever skanky knock-off costumes the good people of Japan cook up.

To my dismay, on my hasty jaunt to get an article in time for General Matt Schley, I found but a single aisle of knick-knacks because someone decided to subtract 30 from Halloween’s date and start deep-discounting away. Never mind that there’s no trick-or-treating and Halloween is just an excuse for children to have little parties and adults to get plastered and mindlessly hook up – there’s an article to write! Some improvisation is in order. 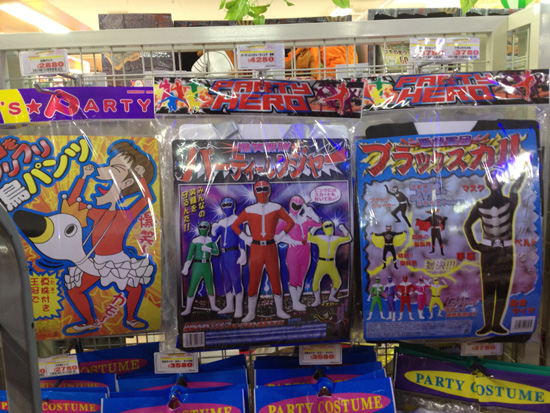 First of all, despite not being 500 yen and disqualified from the challenge, these ranger and Shocker suits are so damn lovable I can’t go through this article without mentioning them. Always a welcome sight in Shibuya as they parade about for our amusement. 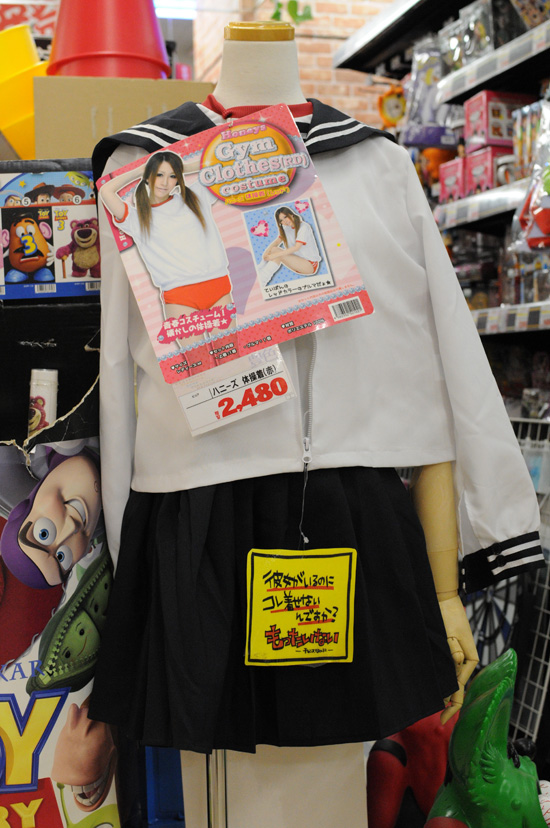 Also worth noting is this mislabeled school uniform priced at 2,480 yen – not so much for the uniform itself as the shameless yellow tag on it reading, “you have a girlfriend but you’re having her wear this? What a waste! (Such a great chance too…).” No Donki. I write for a magazine called Otaku USA. Having a girlfriend and knowing the unmentionable pleasure of having her suit up for your amusement? WHY DO YOU REMIND OF WHAT I DON’T HAVE, YOU ACCURSED STORE? 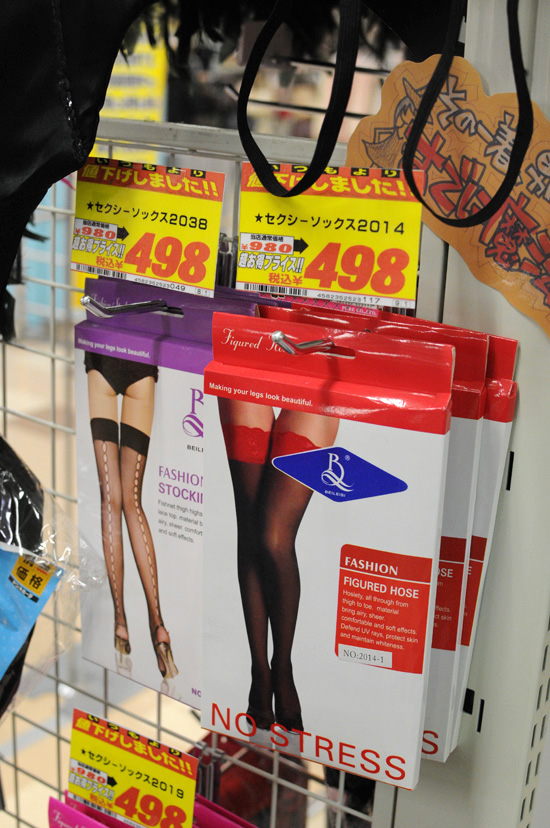 Stockings that are actually up to the Challenge. Sadly, I won’t look half as good as the non-existent girlfriend would with that school uniform. 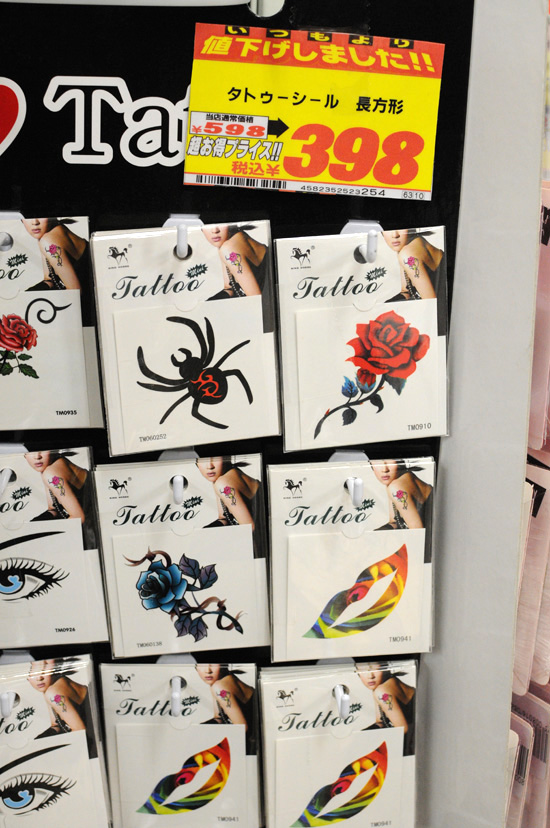 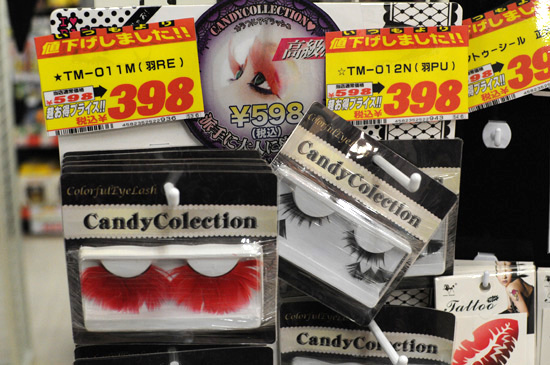 Fake eyelashes. Get the Harajuku look for a fraction of the price. 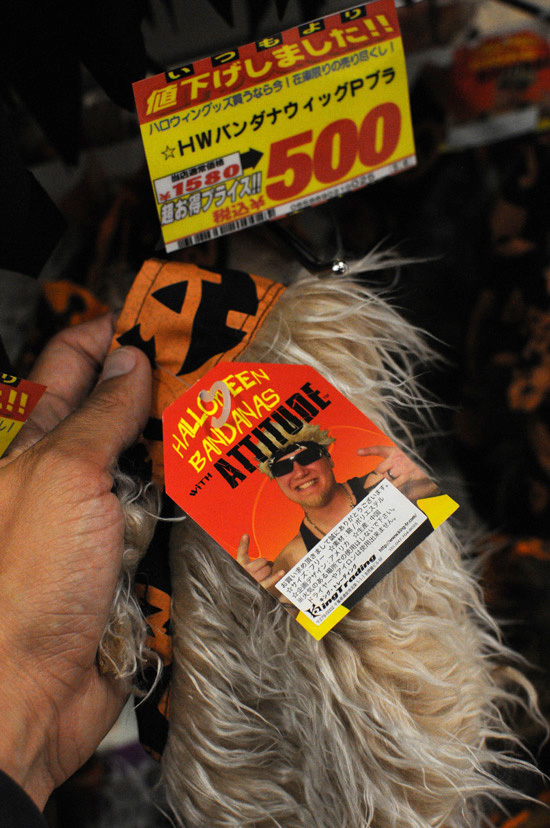 This wig is just asking me if I’m a bad enough dude to rescue The President. Yes. Yes I am. I can feel my muscles growing and women fawning over me should I just dare, dare to ride the eye of the storm when all hell is breaking loose. Am I a bad enough dude? Yes… but the wig was too small for my head. So I moseyed on over to the 100-yen store in search of cheap… 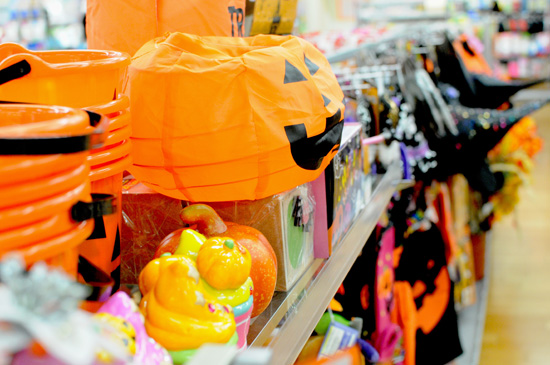 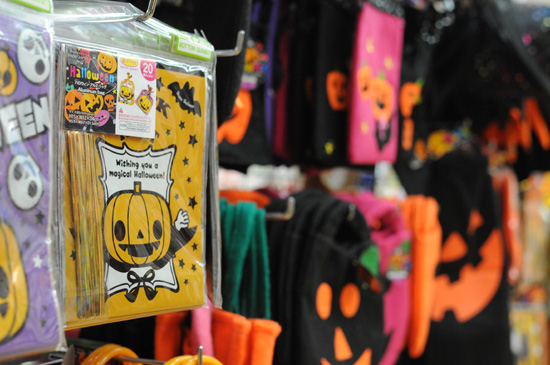 Crap. Not even interesting crap. Pumpkins and cheap hats. Great for the English school teachers of the nation’s seasonal lessons – not so much for the anime writers… 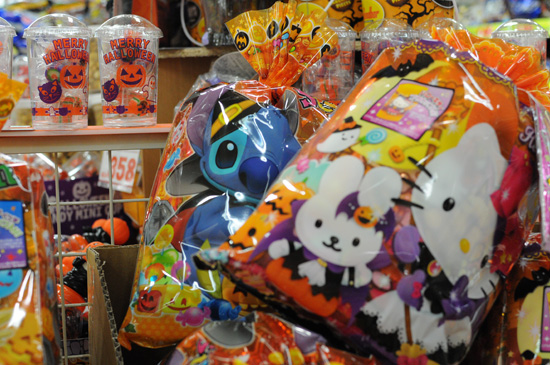 Aww yeah, that’s the stuff. Nothing like Big Sister Hello Kitty and her second-in-command Stitch to wish me a Merry Halloween, because it’s not Japan without at least one mixed metaphor… 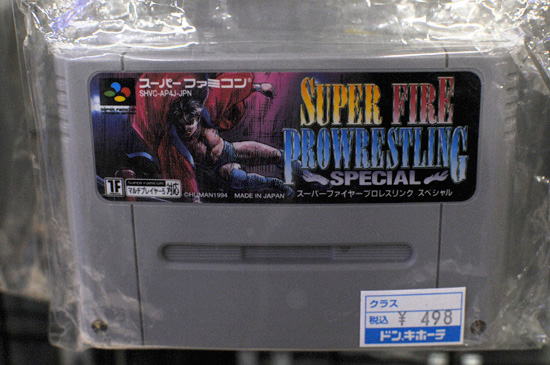 …Or without Suda 51’s directorial debut, where the main character decides that suicide is the only way to become an hero of the wrestling ring. Now that’s more in the spirit of the season.