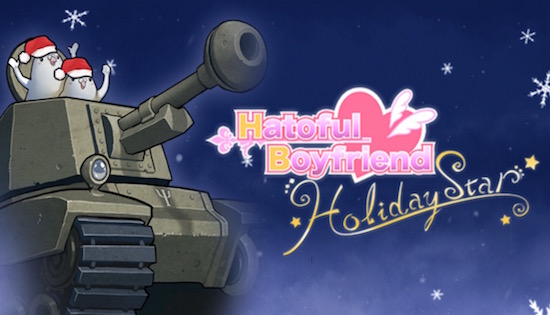 Last year I got the chance to play the 2014 remake of Hatoful Boyfriend. The game was a visual novel and dating simulator where the player acts as a human girl attending in a world dominated by birds. It was a surprisingly enjoyable experience that went beyond simply coasting off a novelty to make a well-crafted game. Unfortunately, the sequel/companion title Holiday Star doesn’t live up to the expectations set by the first game.

The biggest difference between Holiday Star and the original Hatoful Boyfriend is the way the stories are structured. In Hatoful Boyfriend, there’s a single, solid story with multiple courses of events depending on the choices of the player. Holiday Star, however, is comprised of a collection of mostly episodic stories that are loosely connected. This results in a much more linear game. The interactivity is almost nonexistent, and the few choices you are able to make have no bearing on the story. The most significant ones are a handful of really cheap scenarios where you just have to guess which one option will give you a fail state. And if you do pick the one that gives you a game over? I hope you remembered to save your game right before it came up, or else you’ll have to spend a few minutes fast-forwarding to where you left off.

This isn’t to say that a visual novel has to have a nonlinear storyline. But with how well it was done in the first game, it’s disappointing to not have one this time around. I could forgive the change in format if the story was especially compelling, but I just didn’t find it so. So much of it was painfully dull and seemed dragged on despite the short length of each of the episodes. Toward the end of the story things got a bit more interesting with a plot reminiscent of the book Night on the Galactic Railroad, but it still felt long-winded. Besides, by the time I had gotten that far I was running low on patience. 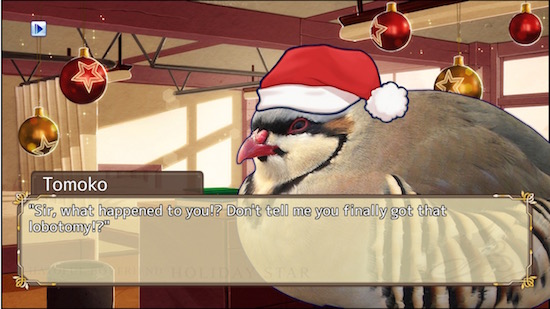 The story had some potential in that it expanded on the world that Hatoful Boyfriend takes place in. The bird-dominated setting was really interesting to explore in the first game. Unfortunately, this isn’t expanded upon much in Holiday Star. A good chunk of it seems inconsequential to the overarching history of the world where intelligent birds are the dominant species and humans live in caves. Instead it’s mostly spent on random hijinks that really don’t tell us much about the Hatoful Boyfriend universe.

I really can’t recommend this game to anyone but the most hardcore Hatoful Boyfriend fans who have probably already made up their mind to buy this game anyway. Fans of the first game will be disappointed because most of the things that made it great (i.e. branching storylines, a diverse run of story genres, interacting with new characters and high replayability) are absent in Holiday Star. People who are new to the series will feel lost because of the unfamiliar setting and the fact that the story expects you to already at least know the basic personalities and backstories of each character. Holiday Star serves neither as a good sequel nor as a game that can stand well on its own. 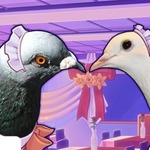 Show by Rock is Pure, Unadulterated Junk Food Entertainment
The Second Season of Nisekoi is “Steady As She Goes”