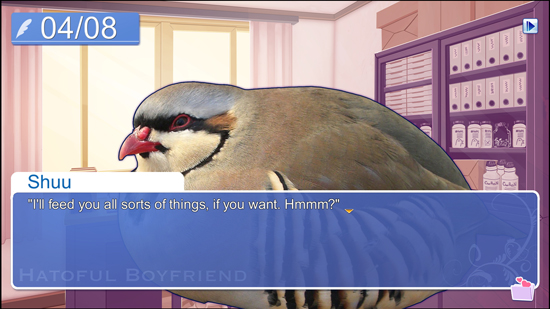 My very first dating sim is about dating birds. This was truly the high point of my gaming career. Hatoful Boyfriend is a very special game. You play as the only human student in a school otherwise populated entirely by birds. It’s your sophomore year and you’re ready to find a special someone to feed little bits of stale bread to. Can you fit in with your winged classmates? Will you find true love? Will you get the bird flu in the most disgusting way possible? There’s only one way to find out.

I’ll admit that I don’t have much experience with this type of game. 90% of what I know about visual novels and dating sims came from watching Welcome to the NHK. Even so, Hatoful Boyfriend was a very approachable game. I got into the groove of its mechanics pretty easily without needing a long history in courting 2D waifus. Even as an outsider I was also to appreciate how the game’s tongue-in-cheek writing pokes fun at the genre. 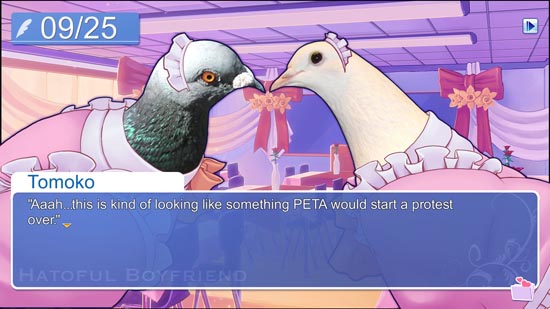 When I first heard about Hatoful Boyfriend, I thought it would be a novelty title that would mostly just be good for a joke. But once I started playing I realized that while the writers had a lot of fun joking around, this game stands pretty tall on its own merits. There are eight love interests, each with their own distinct personality. I expected them to be a bunch of typical anime archetypes, but each of them are actually pretty unique. Depending on which bird you choose you could end up with a bittersweet love story, a dark thriller, an exciting adventure or something else entirely.

I’m sure the question on everyone’s mind is why is there a human girl going to an all-bird school? Well I won’t spoil it, but I will say that this isn’t just a funny premise to make the game stand out. There’s actually a really interesting backstory to the world Hatoful Boyfriend takes place in. They do a good job of feeding the player information bits at a time and leave plenty to the imagination. This way the game avoids annoying exposition dumps or serving up an unsatisfying story. 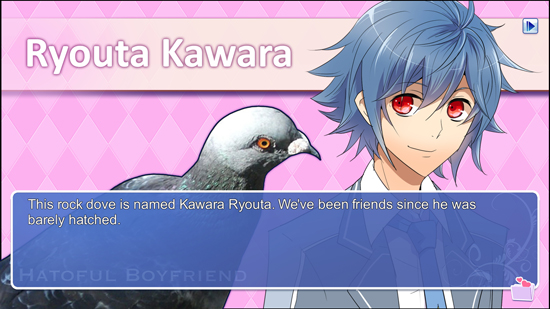 It’s not a huge part of the game, but when you meet your love interests for the first time the game will show you a humanized version of them. These are here to help ease the player into the idea of thinking of realistic birds as people. It helped me a little bit, but I’m personally not a fan of the art style used for the human portraits. This is the one thing in the game that I found to be generic and underwhelming.

The game has a pretty nice soundtrack. It had a nice mixture of original scores and classical music that fit the game quite nicely. The music didn’t come off as very original to me, but that doesn’t really make me like it less. It had a familiar kind of sound that made me feel right at home. If you play a lot of Japanese games or watch a lot of anime then you’re likely to feel the same way.

Overall, I really enjoyed Hatoful Boyfriend. What seemed like nothing but a joke turned out to be a very memorable experience. However, I didn’t walk away from this game excited to play more visual novels. If you’re looking for a gateway game to get your friends into the genre then there’s probably a better choice than this. Otherwise, I highly recommend picking up this game. 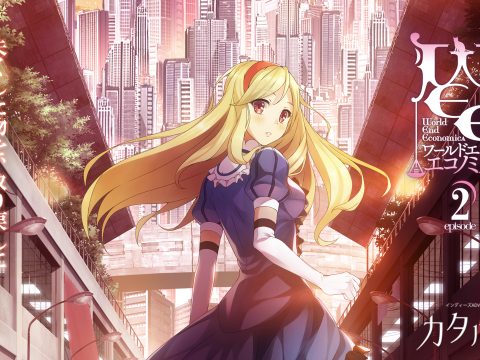 Why You Should Be Playing WORLD END ECONOMiCA