The Night Is Short, Walk on Girl: A Wild, Joyous Romp Through the Night [Review]

Masaaki Yuasa is back.

The visually-inventive auteur behind anime like Mind Game, Kemonozume and Kick-Heart had a busy 2014, directing the series Ping Pong, helming episodes of Space Dandy and Adventure Time and founding his own animation studio, Science Saru.

What followed was three years of silence on the Yuasa front – until it was suddenly announced 2017 would see the release of not one but two films from the director.

The first of those two films, and Yuasa’s first theatrical release in 13 years, The Night Is Short, Walk on Girl (released in Japan April 7) is a heck of a ride: a rumination on youth, mortality, friendship, love, coincidence and destiny that’s also a wild, joyous romp though the rollicking backstreets of Kyoto. 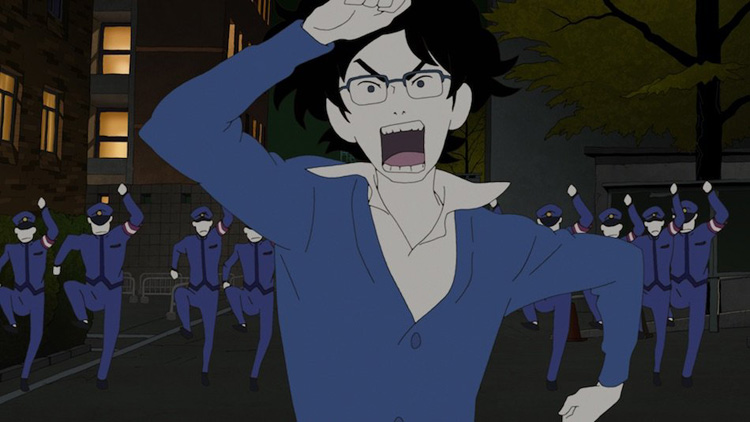 As the film begins, both characters, at the wedding reception of a university classmate, are rueing their next moves: for the Sempai, how to find himself in a seat near the Girl at the afterparty; for the Girl, how to escape her teetotaling tablemates and and find some libations in Kyoto’s alleyways.

It’s the Girl who succeeds, finding herself on a whirlwind pub crawl through the city with a band of charming misfits. Sempai, on the hunt for the Girl, has less luck: he’s surrounded by a gang of toughs and disrobed, forced to wander the streets begging for a pair of underwear (this is only the first of many problems to befall Sempai’s nether regions over the course of the film). 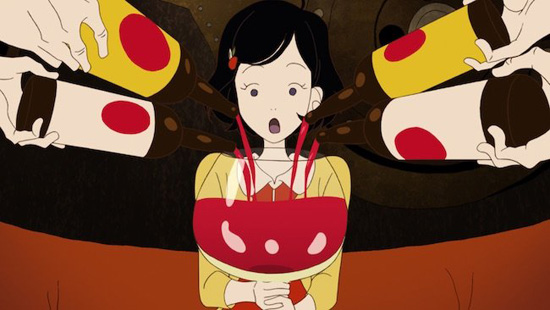 Meanwhile, the Girl flits through the night, and with a seemingly limitless alcohol tolerance, brightens the spirits of each increasingly absurd party she comes across, at one point convincing a gloomy group of existentialists to give up their nihilistic discussions in a dance of wild abandon, and even saving a debtor from certain doom by drinking his creditor Rihaku, an ancient, almost God-like presence with a preference for Denki Bran, under the table.

Though the film is ostensibly about both the Girl and her Sempai, it’s clear early on she’s the true star of the show (in fact, the first sentence of the source novel reads “this isn’t a story about me, it’s a story about her”). A glowing, effervescent existence, the Girl, in lesser storytelling hands, might’ve become that grating 21st century trope, the Manic Pixie Dream Girl. But in addition to portraying her rich inner dialogue, Yuasa treats the Girl almost like almost like a force of nature, sweeping through the Kyoto night – and who expects character development from a tornado?

If there is a character who goes through a more traditional filmic “arc” (though I’m not convinced Yuasa is particularly concerned with traditional filmic anything), it’s Sempai, who learns to overcome his shyness and take a more active tack in winning the heart of the Girl – and the decision actually takes place on-screen, with the inner workings of Sempai’s brain portrayed as a kind of control center where ego and id duke it out. 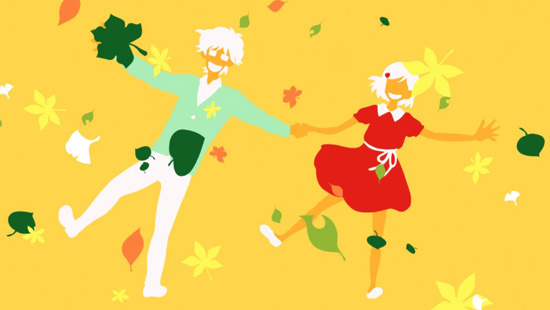 Of course, the joy of watching The Night is Short, Walk on Girl is due in no small part to its animation. I don’t know another working director who seems to take as much pleasure in making images move. The film’s characters designs are inspired by the original novel illustrations by Yusuke Nakamura, and those minimalistic designs work in perfect harmony with Yuasa’s freewheeling style, less interested in realistic movements or proportions than an exaggerated, jelly-like fluidity that expresses characters’ feelings through action. The simple designs also lend themselves to playful shading: characters who have had too much to drink, or are feeling embarrassed, are colored from head to toe in varying shades of red.

Those familiar with Yuasa’s series The Tatami Galaxy will immediately find the look and feel of this film familiar. That’s no coincidence: both are based on novels by Tomihiko Morimi, and The Night Is Short, Walk on Girl shares plenty of themes, a virtually identical visual aesthetic and even a few characters with that series.

But I don’t remember The Tatami Galaxy being anywhere this fun. While that series centered around a a regretful, sometimes spiteful young man, the ragtag misfits of The Night Is Short, Walk on Girl seem to have embraced a happier, sillier take on life. A sensible choice: after all, the night is short, and there’s some walking on to be done. 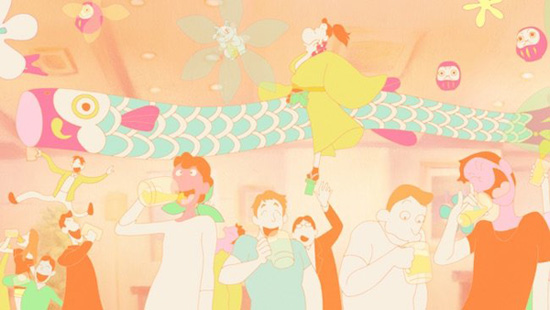