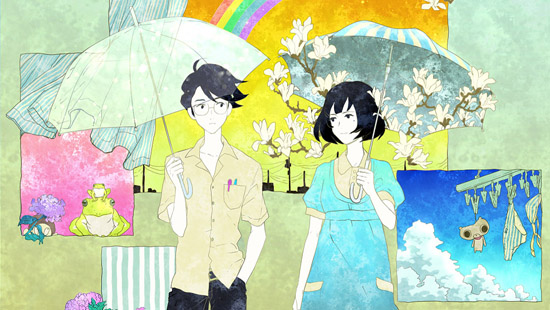 Ah, university life. Whether a distant, quasi-fond memory or something you’ve only been given a small reprieve from this summer (for those of you still in high school and yet to know the joys of university life, the phrase “Abandon hope all ye who enter here” springs to mind), there’s no denying that it can be as brutal as it can be rewarding. So when I say that the unnamed protagonist of Tatami Galaxy lives university life—with far more of the brutal bits and far less of the rewarding bits—ten times over, you know we’re talking about some serious Ninth Circle of Hell material here. Except that I doubt that the Ninth Circle of Hell features a rock-climbing wall made out of breasts.

Tatami Galaxy is the appropriately surreal story of Watashi—”I” in Japanese—the only name ever given to its rambling protagonist, as he navigates the labyrinth that is his campus life. Convinced that the only way to have the “perfect” experience in university is to pick the correct extracurricular circle to join, Watashi carefully considers each circle, discarding irrelevant considerations such as “having an interest in this activity” and prioritizing ones like “likely to have many attractive and available ladies.” Needless to say, his choice of the tennis club doesn’t pan out very well—everyone there is already paired off except for engineering student Akashi, who really isn’t Watashi’s ideal woman. Still, he figures, any port in a storm, and with some helpful advice from the marriage god who happens to live in his dormitory he decides to run with it anyway. 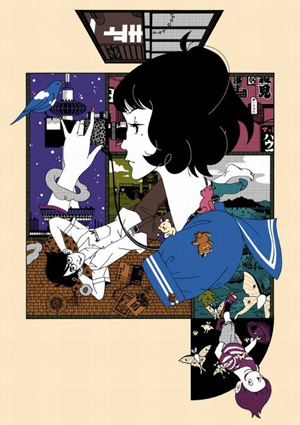 Which, more or less, is how he ends up drowning naked in the town river in the middle of a festival directly in front of Akashi. And that’s just the first episode. I told you it was the Ninth Circle.

Fortunately for the viewer, Watashi somehow has the ability to travel back through time to the first day of his career at university and do everything all over again, this time selecting a different circle from the vast array of possibilities and hoping things work out for the better.

Like all stories that hinge on a “repeat time indefinitely” conceit, from Groundhog Day to the Higurashi/Umineko series, the ultimate goal for Watashi is to get the sequence of events right to allow events to proceed. For Watashi, this means pushing onward through a labyrinth of possible events hinging around the 4.5 tatami mat room he stays in at the dorm, hence the name Tatami Galaxy. Like any proper labyrinth, Watashi undergoes a great deal of suffering, although his sardonic narration keeps the tone of the series light.

Each iteration of this labyrinth has Watashi picking a different circle to join, finding himself always stuck with the same group of characters: there’s Akashi, dry of wit and often the only person actually interested in whatever Watashi’s doing; there’s Ozu, who resembles a demon from Japanese myth and often makes Watashi’s life even more hilariously miserable than it originally was; there’s Higuchi, eighth-year chronic student who is considering actually graduating at some point in the future; and Jougasaki, whose pure, innocent love and dedication to his Gothic Lolita Real Doll is the stuff of legend. Although the characters almost always engage in different activities across the various iterations, bits and pieces of their personality slowly fall into place as the series progresses.

It’s those deeper, more complex personalities that give Tatami Galaxy the heart to change it from an enjoyable but forgettable series about Watashi’s pratfalls to something more profound and memorable. Director Masaaki Yuasa (director of Kemonozume and Kaiba) and his staff deftly balance the comic side of the story with the human side, never letting the viewer stray from sympathy with Watashi even as he acts in what is generally the most ridiculously idiotic manner possible. The final two episodes, which add a deliciously Borgesian twist to the story, have genuine heft as Watashi works out what’s wrong with what he’s been doing and what he needs to do. 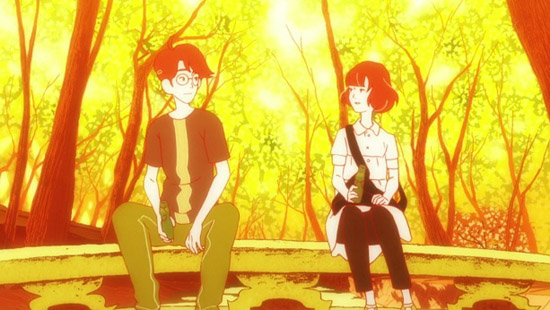 In line with that, it’s worth noting as well that Yuasa—known for unorthodox stylistic approaches to his anime—retains his sense of style while remaining accessible to a broader audience. If the styles in Kaiba and Kemonozume could be off-putting to some, Tatami Galaxy‘s style meshes better with contemporary stylistic experiments, with bright, flat colors and characters.

Ultimately, Tatami Galaxy is a gem of an anime: like the novel it’s based upon, it acknowledges concerns and issues faced by youth today without belittling or patronizing them in the process—a sin far too many anime titles of late, especially those trying to deal with social issues, have committed. That it does so without descending into sentimentality or clobbering you with the time-honored Sledgehammer of Subtlety only makes it stronger.