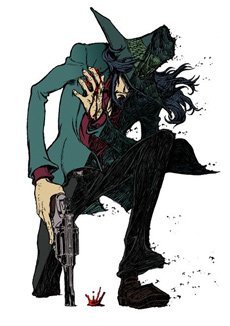 Hey man, let’s face it, as good as we want those yearly Lupin TV specials to be, they’re usually pretty mediocre affairs. So we were planning to go ahead the latest Lupin film – that is, until it was revealed the director would be none other than Takeshi Koike.

Yeah, that Takeshi Koike. The same guy who directed the coolest anime film of the last decade, Redline. The same guy who did the character design and animation direction for the whacked-out, hyper-sexy breath-of-fresh-air-the-franchise-needed A Woman Named Fujiko Mine.

The film will be called Daisuke Jigen’s Gravestone, and center around none other than Lupin’s partner-in-crime Jigen. Koike explained in a comment that the film will be about how Lupin and Jigen came to be partners while Yu Kiyozono, producer, promised that this Lupin will continue in the same edgy vein as Fujiko Mine.

Now, the press release doesn’t make clear that this is the yearly Lupin TV special, but we’d bet a Fiat 500 full of goat bills it is. There’s also speculation this will mark the final film for Jigen voice actor Kiyoshi Kobayashi, who has voiced the character since 1969 and is the only remaining original cast member.

There will be a limited theatrical run over here in Japan this summer, so look for our review then!

UPDATE 6/30/14: The movie came out and we saw it, read our Lupin III: Jigen’s Gravestone review here!