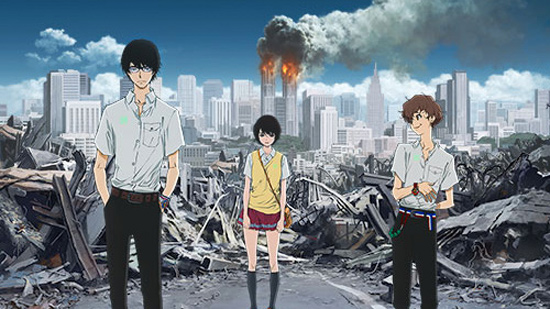 After a few years of radio silence, Shinichiro Watanabe is back on the scene and firing on all cylinders.

The director of Macross Plus, Cowboy Bebop and Samurai Champloo dusted off the old director’s chair and took it for a spin in 2012 with the jazz story Kids on the Slope, and followed up in fine form with the premiere of Space Dandy this January.

Apparently all this work has reminded Watanabe how much he likes making stuff, because now he’s set to direct another series starting this summer. It’s called Zankyo no Terror (Echo’s Terror) and will run on Fuji TV’s noitaminA block (also known as “where all the cool anime airs”). The plot concerns a terrorist attack on Tokyo and three high schoolers who get somehow wrapped up in it.

Zankyo no Terror will reunite Watanabe with animation studio MAPPA, who produced Kids on the Slope, and the music will be done by none other than Cowboy Bebop’s Yoko Kanno. If that don’t get you pumped, friends, I don’t know what will.

With a second season of Space Dandy confirmed for this July, Shinichiro Watanabe has officially become the busiest man in anime. After the long post-Samurai Champloo drought, we’re happy to have him back.

(A bit of trivia: the tower attacked in the video and poster is real – it’s the Tokyo Metropolitan Government Building in Shinjuku.)