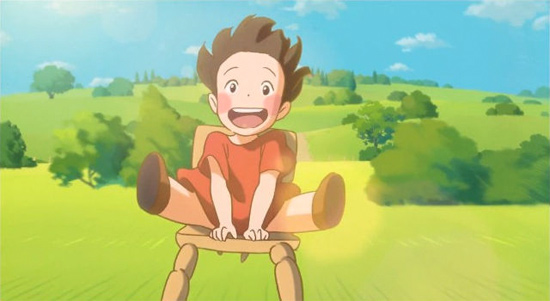 Believe it or not, noitaminA is almost ten years old.

For those who might not be familiar with noitaminA, a quick rundown is in order: it’s a anime programming block on Fuji TV dedicated to airing anime that appeals to folks beyond the typical young male anime audience. It began as a half-hour block with Honey and Clover back in 2005 and eventually expanded to an hour, hosting shows like Eden of the East, Tatami Galaxy and Anohana. But what does noitaminA mean? Trying reading it backwards.

To celebrate the tenth anniversary (which by our calculations won’t be for another twelve months, but noitaminA runs on fuzzy maths, apparently), director Hiroyasu Ishida has put together a short that can only be described as “incredibly charming.” It’s called Poulette’s Chair, is embedded below, and best of all, requires no knowledge of Japanese to understand!

You may remember Hiroyasu Ishida as the director of the equally charming Fumiko’s Confession, which Ishida put together while studying animation at Kyoto Seika University.

What’s in the works for noitaminA’s tenth year? A lot of good lookin’ stuff, we must say. Ping Pong and Zankyo no Terror, two new shows by two of our favorite directors, are headed to the block soon. gnoL eviL noitaminA!