So, Which Lupin the Third Anime Should You Watch Next?

As I sit down to write this, the latest James Bond movie, Skyfall, is currently playing in movie theaters worldwide, and a lot of people who enjoyed that movie (which is a LOT of people) are now rather interested in watching more James Bond films. But with 50 years of movies varying drastically in tone, “what to watch next” is less a question of “which movies were good?” than it is “WHY did you like the one you saw?” 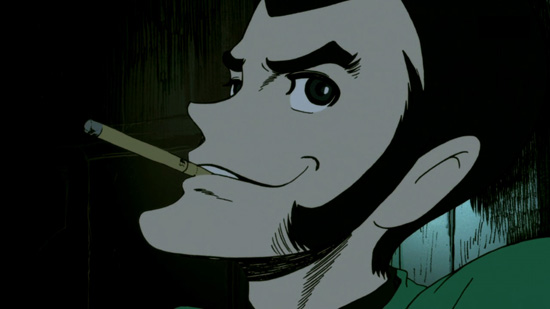 I’ve said it before and I’ll say it again: Lupin the Third is the anime equivalent to the James Bond films, only with about a 10 year difference. That means Lupin is probably currently in its “Pierce Brosnan” phase, with a brief stint of “Timothy Dalton” after an extended “Roger Moore” period in the wake of the “Sean Connery”-era original. There may or may not be a “George Lazenby” equivalent depending on how you want to perceive one of the installments, but in the event that you are NOT a male over the age of say, 30, it’s a safe bet to assume you have no idea what any of what I just wrote means. Allow me to state matters a bit more plainly:

While it’s true that lots of Lupin the Third has been commercially released or unofficially subtitled in English by fans, most English-speaking anime fans that have been introduced to it within the last decade have done so by seeing either the movie The Castle of Cagliostro, this year’s simulcast of The Woman Called Fujiko Mine TV series, or the 2003 Adult Swim broadcast of the second TV series. While it’s a reasonable assumption to make that the Adult Swim viewers have had nearly a decade to work this out, where one should proceed from those starting points may not necessarily be so easy to figure out based on looking at fan sites or asking the really hardcore fans whose gut instinct is to give a laundry list of things to watch that may not necessarily be to your liking. (For an even better example on this phenomenon, consider what it’s like to be a new fan of Gundam in 2012). Since there’s nearly a half-century’s worth of anime alone to consider, let’s narrow those Lupin viewing options down just a bit. This isn’t meant to be a comprehensive list of every great Lupin installment ever. Indeed, some of my favorites are intentionally omitted due to ease of availability. Just think of these recommendations as possible “second steps.”

Thanks to its English-language online streaming broadcast that relatively coincided with its airing on Japanese television, in 2012 the brand new TV series Lupin the Third: The Woman Called Fujiko Mine served as the very first Lupin the Third anime for a generation of anime fans. If we want to extend that James Bond analogy further, this may well be the “Daniel Craig” for Lupin. More specifically, Casino Royale: an “origin story” of sorts with a meaner and more serious tone meant to evoke the spirit of the original source material from decades ago, while also expanding forth in a new direction. Between my initial impressions posted on the web and my print feature, I’ve more or less said my piece on that, but where the Craig analogy breaks down is that the reception to Fujiko Mine among fans and general audiences alike was not that of universal acclaim. Reaction thus far has been mixed to the point that the latest Lupin the Third TV movie which aired in Japan last month is essentially more of the same as what we’ve been getting for the last several years. Only time will tell whether The Woman Called Fujiko Mine is remembered more as a harbinger of a new era like Casino Royale or a once-off like Never Say Never Again. 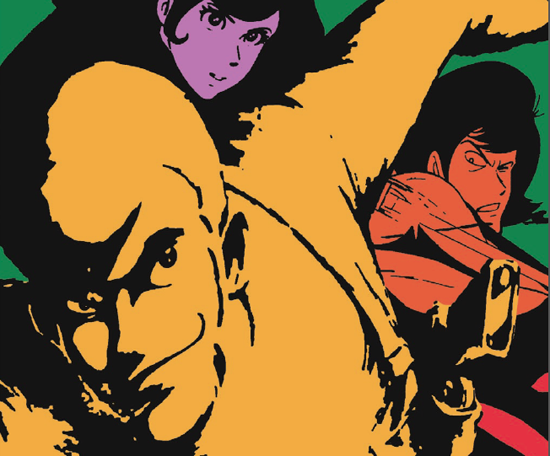 What I’m getting at is that if you liked The Woman Called Fujiko Mine and want more along similar lines… that’s a bit tricky. The closest pick would be to check out what directly inspired it: the episodes of the original Lupin the Third television series directed by Masaaki Osumi, which were intended to capture the spirit of the original manga and appeal to more adult audiences. (These, too, were met with mixed reception at release.) Thanks to the handy supplemental materials included with the Discotek DVD release, I can tell you that those episodes would be the first 7, along with episodes 9 and 12. If you can’t spring the $40-$60 for the DVD set, the entire thing is now streaming free of charge via Hulu! Just search for “Lupin the Third Part I” and they should all come up. Just remember that unlike owning a DVD, things can disappear from Hulu without notice. My second suggestion would be the TV special Lupin the Third Episode 0: First Contact, which is also available courtesy of Discotek Media. That’s a slightly more modernized—only ten years old!—take on some of the more well-known events of the original series, so it’s just a little tamer as far as sexual content goes. Still, in its place there are more gun battles, swordfights, car chases, and combination gun battle/swordfight/car chases. I could recommend a few more, but let’s leave it at two. 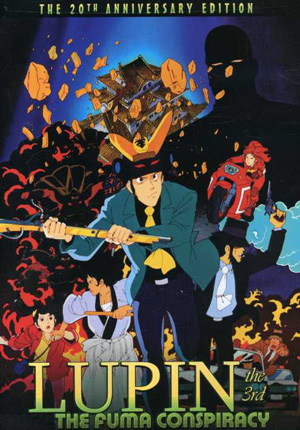 As I noted in my previous web article, The Castle of Cagliostro remains the single most famous Lupin the Third anime there is. Since its release, it has become the baseline by which subsequent Lupin anime has been patterned after. One might think this would make for a plethora of answers for “what to watch next,” but for my money’s worth there is only one “best” answer: The feature-length OVA The Fuma Conspiracy. This too is available from Discotek—notice a pattern, here?—and it features much of the same animation staff as Cagliostro minus its director, Hayao Miyazaki. Infamously, in a cost-saving measure the Japanese voice cast for this differs from that of the cast used for every other Lupin anime, and while the new cast is replete with a lot of my personal favorites who do a great job, the fans (and original cast!) were less than thrilled by the change. The original cast was brought back for the later films. I suppose in James Bond terms, that makes this the equivalent to On Her Majesty’s Secret Service. Here too we have one of our heroes, the samurai Goemon, settling down and getting married… though I suppose the added involvement of an evil ninja clan and secret underground base bears more superficial similarity to You Only Live Twice. Pedantry aside, The Fuma Conspiracy features some absolutely fantastic chase sequences, and with the focus on Goemon you know there’s going to be a fair share of things getting slashed to pieces.

A “second best” recommendation for Cagliostro fans would be to watch the episodes of the original TV series that Masaaki Osumi did NOT direct, as many who worked on those—notably Hayao Miyazaki, Isao Takahata, and Yasuo Otsuka—later went on to do Cagliostro and form the critically-acclaimed Studio Ghibli. I know, that staff worked on some episodes from the second television series as well, but those episodes aren’t easy to find and I don’t want to over-complicate matters. Let’s move on. 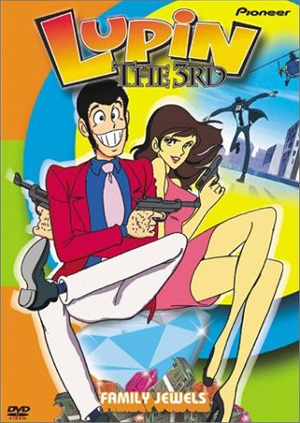 It’s rather telling that the third most common “first-time” exposure to Lupin the Third is out of print on DVD and hasn’t been on TV in the US for roughly a decade: The TV episodes that aired on Cartoon Network’s late night viewing block, Adult Swim. These were originally part of the second television series and were released by Geneon, and even though this series and material similar to it constitutes the vast majority of all Lupin anime that has ever been made… those too are either years out of print or were never licensed in the first place! English dubbed installments of 52 of those second series episodes are currently on Hulu (search “Lupin the Third Part II“), and considering that Adult Swim only showed about 26, the simplest “what to watch next” recommendation would be everything after what Hulu lists as “Season 1.” Who knows? Perhaps Hulu will put up the remaining 27 episodes that Geneon dubbed into English as well. That alone will keep anyone busy for quite some time. Heck, you could even go back and see what was edited out from the TV broadcasts were you so inclined. But since that’s a whole lot to watch and some episodes are better than others, if you don’t have that much time my recommendation would be the upcoming re-release of the theatrical film The Mystery of Mamo courtesy of… yeah, you got it in one… Discotek Media! It’s currently set for re-RE-release on February 26, 2013. I say that because the movie was dubbed into English several times such that the upcoming edition will include multiple dub tracks, one of which is by the same crew that worked on the Adult Swim episodes.

It’s daunting to even attempt watching series that have been around longer than we ourselves have been. But the beauty of Lupin is that it doesn’t really matter if you skip around, which is fortuitous given that so much of it remains out of print or otherwise unavailable in the US. Hopefully these recommendations based on the most statistically likely ways in which one might first be introduced to the character in America will prove helpful. And in the event you haven’t seen those introductory points… why, those are all legally streaming too! Ain’t the Internet grand?