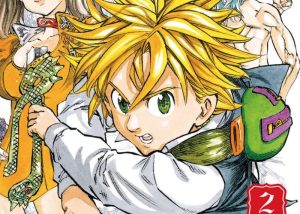 Kadokawa’s Da Vinci magazine recently shared an interview with The Seven Deadly Sins creator Nakaba Suzuki, who had some plans to divulge regarding the series’ conclusion. According to Suzuki, he plans to end the manga in “about a year,” which will result in roughly 40 volumes total.

Suzuki went on to add that he has had the ending in mind since he first started working on the manga, and he aims to make a conclusion that’s truly shonen magazine worthy. As for sequel plans, he says it depends on the editors. His next work might switch things up completely and focus on baseball.

The Seven Deadly Sins has been running in Weekly Shonen Magazine since 2012. Next up for the anime adaptation is the Prisoners of the Sky anime film, which is set for an August 18 opening in Japan.