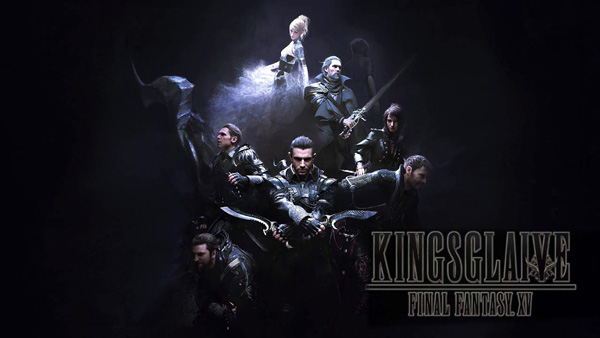 For longtime fans of the franchise, Final Fantasy XV has been a frustrating albeit highly-anticipated game since its introduction as Final Fantasy XIII Versus in 2006. However, fans have become more positive about the ten-year wait since Square Enix announced the Final Fantasy XV Universe and all its components earlier this year.

As you may know, the FFXV Universe consists of the game, which is due for worldwide release September 30, a mobile game, the already well-loved anime (Final Fantasy XV: Brotherhood), and this full-length CGI film, Kingsglaive: Final Fantasy XV (directed by Final Fantasy VII: Advent Children’s Takeshi Nozue).
Square Enix has not held back in creating this new universe, employing innovative technology, motion capture, and casting popular actors to play the main roles. But is it too much? Is it all simply a way to make up for the incomprehensible storyline of Final Fantasy XIII or the ineffective battle system of XII? Perhaps.

So I went to see Kingsglaive: Final Fantasy XV to see firsthand just what kind of universe is being created. And I have to admit, after seeing this film, the ten-year wait is beginning to seem justified.

(Note: I viewed the film in Japanese, as the U.S. release date is slated for August 19.) 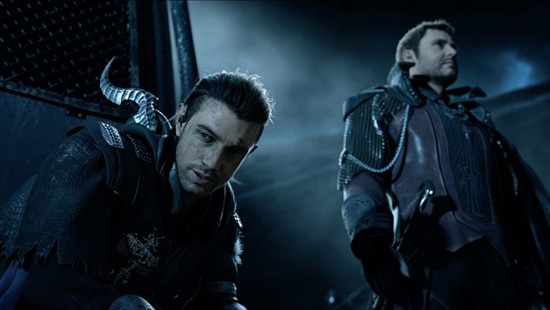 Kingsglaive: Final Fantasy XV is set at the same time as the beginning of the game. It tells the story of the Kingdom of Lucis and its sacred crystal that grants magic to the king and his followers. The Niflheim Empire will stop at nothing to get the crystal and the king’s ring that acts as a conduit. Nyx Ulric (Gō Ayano), member of the glaive, fights to keep the ring, the crystal, and his country safe from the Emperor of Niflheim.

The movie begins 10 years prior to the main events, when the Niflheim Empire has attacked Tenebrae, the home to Princess Lunafreya Nox Fleuret (Shiori Katsuna). Allied to the Kingdom of Lucis, King Regis (Tsutomu Isobe) tries to flee with Lunafreya and his injured son, Noctis. However, Lunafreya stays behind with her brother.

Ten years later, Regis protects his city with a magical barrier that has kept intruders out. Lunafreya is used as a bargaining chip to unite Niflheim and Lucis through marriage with Noctis, but under the guise of seeking a ceasefire, King Regis is betrayed and the barrier breaks. Nyx and Lunafreya are entrusted with delivering the ring to Noctis, but to do so must escape the overrun city and the traitors. Together with the small remaining power of the crystal, they fight against the king’s betrayer, the impenetrable Glauca. In the final battle, Lunafreya escapes to contact the traveling Prince Noctis.

As for the story, I have few complaints, though I think it’s almost too early to assess its place in the Final Fantasy XV Universe. On the technical side of things, however, there were a few issues. 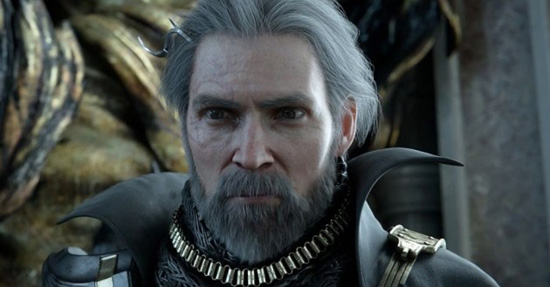 Kingsglaive: Final Fantasy XV was made with western voice and motion capture actors, with the English recorded before the Japanese. In the Japanese version, this makes for strange lip-flap and body movement, and looks like a dubbed movie rather than something from Japan. I am eager to see how the motion capture flows with the English dialogue (and Sean Bean’s amazingness, natch).

Despite this small issue, the characters of Kingsglaive: Final Fantasy XV were exciting and emotionally realistic. Nxy was the type of character that pulled you in. I wanted to know more about him, his history, and his future.

But Lunafreya was, by far, my favorite character in the film. She was reminiscent of the strong female leads in past Final Fantasy games, going back as far as VI’s Terra. Although she is engaged to Noctis, she is not fighting to just be supportive of her fiancé or even motivated for love. Rather, she is led by her determination to ensure a peaceful future for their world, and she is not afraid to get her hands dirty and fight. Her lack of hesitation in critical moments and rather ballsy leadership – balanced by a feminine touch – was a delight as a female viewer. She was a refreshing character who I cannot wait to see more of in-game. 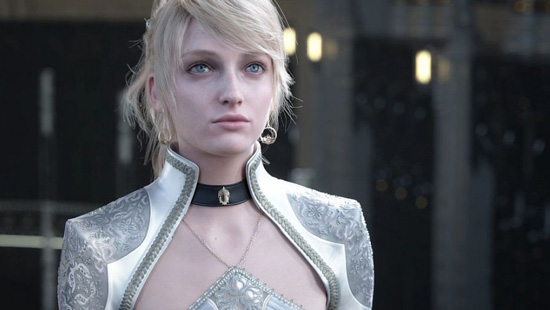 The complexity of the characters’ emotions and motivations has left me in high anticipation for the game itself. Kingsglaive was a testament to not just the depth of the storyline in FFXV, but gave insight to how deep the emotions, backstories, and motivations each and every single character is bound to have. We have only seen the surface of Noctis and his party. If Square Enix fail to deliver the amount of depth in the game that was prevalent in Kingsglaive, they will really have let their audience down.

While I can talk about character depth and plot lines all day, it would be a complete waste to not address the film’s beautiful musical score. Like the game, the main theme was written by longtime Final Fantasy composer Nobuo Uematsu’s apprentice and Kingdom Hearts composer Yoko Shimomura. The near-silent piano theme and lone voices inspire a feeling of loneliness and vulnerability.

Shimomura’s beautiful theme is expanded into a beautiful movie score by the extraordinary John Graham. The theme’s gradual introduction of strings and strong percussion stir a feeling of determination and desperation that flows along with the emotions of the movie characters. This moving soundtrack is definitely something on my wish list this year.

Kingsglaive was everything it needed to be. It introduced an amazing new portion of the Final Fantasy XV storyline, insight into the possibility of in-depth characters, a definite villain for the series, an emotional score, and – best – the question of what comes next. I feel like my faith in Square Enix is being restored, and I am ready to play Final Fantasy XV this September.