[Review] Kabaneri of the Iron Fortress 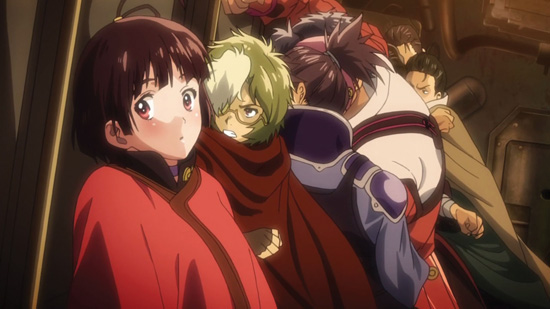 Attack on what now? It’s easy to forget that everyone’s still eagerly anticipating more from the Attack on Titan anime adaptation when Wit Studio is busy tiding anime fans over with their latest banger of a production. That’s thanks in no small part to the fact that Kabaneri of the Iron Fortress has a hell of a first episode. While early previews made Kabaneri seem like nothing more than Titan with trains and zombies in place of walls and giants, there’s a whole lot of fun to be had in this original series, and anyone with access to Amazon Prime Instant Video might as well go ahead and check it out now without reading too much in advance.

While there may be more than meets the eye to the series, Kabaneri of the Iron Fortress does have a mighty impressive elevator pitch. Granted, it would need to be a pretty lengthy elevator ride, so here’s the extended gist of what’s going down in one of the latest products of Fuji TV’s noitaminA block. Fortress stations spread throughout the island country of Hinomoto are humanity’s last defense against people who have been transformed into undead creatures known as Kabane. These horrifyingly fast monsters can’t be stopped unless their hot-orange heart is pierced, but that’s easier said than done thanks to a layer of protective iron. An engineer named Ikoma thinks he may have developed a piercing gun that’s perfect for swiftly defeating Kabane, but his moment of glory is going to have to wait. 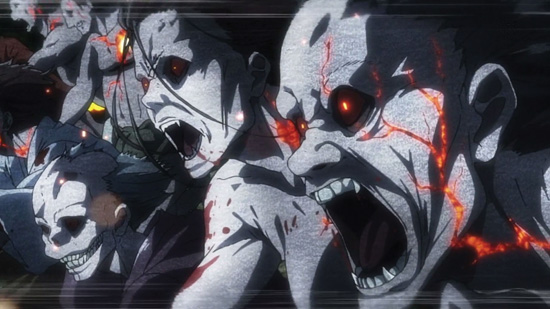 The city’s solid fortification ends up coming instantly undone when one of the armored trains used for patrol and transport is overrun, sending it careening into the city along with all the Kabane that worked their way on board. Before you know it the entire city is infested with them, and just as Ikoma gets to successfully test his new weapon, he takes a direct bite. That would normally be the end of one of our lead characters, but he manages to act quickly and stop the infection before it reaches his brain. Now he’s what is known as a Kabaneri: not quite human, not quite Kabane, but with the mind of the former and the durability of the latter. Together with a large group of human survivors and Mumei, another powerful Kabaneri, Ikoma flees the station aboard a locomotive called the Kotetsujo.

That’s kind of a lot to take in for what amounts to a pair of briskly paced introductory episodes, but Kabaneri of the Iron Fortress handles it well, and it only gets better from there. Beyond the instant hook of the story, setting, and action, one of the main reasons Kabaneri works is its characters. Right off the bat the original character designs by Haruhiko Mikimoto (Gunbuster, The Super Dimension Fortress Macross, Megazone 23) are attractive and distinct, from Ikoma’s eccentric style to the more classic looks of Mumei and the rest of the cast, which includes plenty of tough-as-nails women. The Kabane look fantastic too, opting for something a little more interesting than your average dead and decaying zombie. Their glowing hearts and the wounds that spread throughout their bodies combine with erratic movements to create a formidable foe that actually seems like a real threat. As the series progresses we meet increasingly stronger and more skilled versions of the Kabane that serve to up the tension considerably. 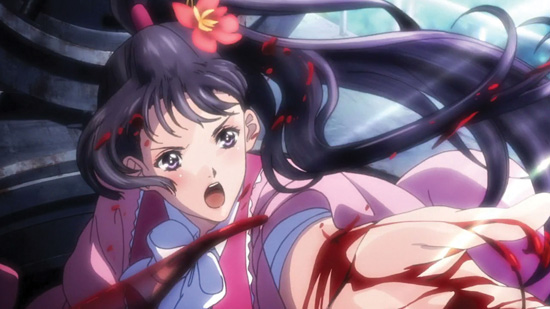 If you’ve seen the show, or even a brief preview, you likely noticed Kabaneri’s impressive animation. Thankfully this isn’t just for the sake of a first impression. Director Tetsuro Araki (Death Note, Attack on Titan, High School of the Dead) and his team have put together a real visual knockout here, and the fluid motions aren’t reserved for action sequences. Characters have a weight to them that’s showcased in scenes that would simply be talking head exchanges in similar shows with smaller budgets. Even if you just come for the eye candy, you’ll definitely want to stick around for one of the most highly concentrated weekly doses of pure anime this year. Recommended.