Problem Children Are Coming from Another World Aren’t They? maps out an intricate fantasy world. 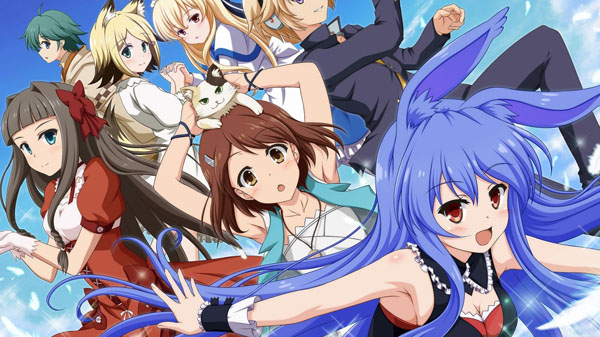 At times smarter than it should be, but more often than not just making excuses for itself in order to have some fun, Problem Children Are Coming from Another World Aren’t They? (Mondaiji tachi ga Isekai kara Karu soudesuyo?) is a shonen fantasy-action-comedy in which three human teenagers are invited to a place called the Little Garden because they have supernatural powers and are bored with life’s day-to-day monotony.

Sakamaki Izayoi, Kudou Asuka, and Kasukabe You, as a condition of accepting the vague but promising invitations (which literally appear out of thin air), must leave everything behind save the clothes on their back in hopes of being able to fully let loose and discover how far they can push their own abilities. After they arrive, each of the titular problem children end up being “entertained” at every turn via participation in the Gift Games, which define this canopied world, as well as the various hijinks involving humans, animals, animal-human hybrids, spirits, gods, demons, and each other that go on in-between games. 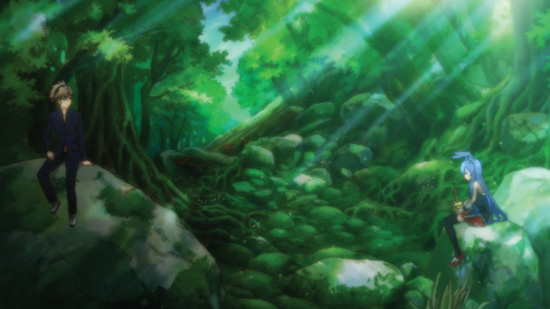 By the length of the show’s title, it’s probably obvious that the source material is a light novel series. This actually works for the anime adaptation in that the world structure built by all those pages of description is definitely not lost in translation. Within its 10 episodes, Problem Children manages to establish an intricate fantasy world that maps in great detail the myriad rules and conditions that apply to the Gift Games as well as the roles of all those involved. The show, going even further, embellishes the participating communities (teams) with believable power dynamics and dynamic socioeconomic consequences.

The problem children are invited by the “No Name” community to kick butts and take names and end up doing just that. They are either physically or magically strong from the get-go, so choosing and winning battles is usually a set-‘em-up-and-knock-‘em-down affair. This doesn’t leave much room for character development, but the series heroically tries to sneak some in here and there to various degrees. 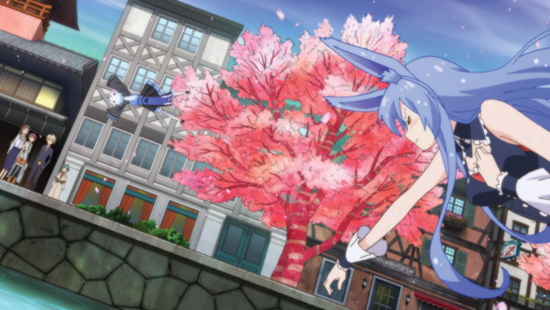 Of the three problem children, Asuka’s character grows the most. Her self-righteous, privileged stance softens as a consequence of being released from her station, wearing down her own rough edges by butting heads with the equally arrogant Izayoi, and forming bonds with those for whom she legitimately comes to care. Kasukabe You is introduced as a quiet type (and stays that way), but episodes layer on her physical abilities and hint at her emotional tendencies as if to pull a “got your nose” on audience expectations.

As for Izayoi, he only (and unfortunately) grows into dead ends. He’s overly powerful and an outside-the-box thinker to begin with, and his above average intelligence, although written off as “trivia,” pops up throughout the show. Hints of his manipulative tendencies surface via his dealings with No Name leader Jin Russell, which is much more interesting but never comes to be of any dramatic consequence. Same thing goes for flashbacks for each of the problem children; only You’s comes to be of any relevance. There’s obviously more to these characters’ stories than is being revealed in the anime, and that’s probably because the light novels series by Taro Tatsunoko is still ongoing. 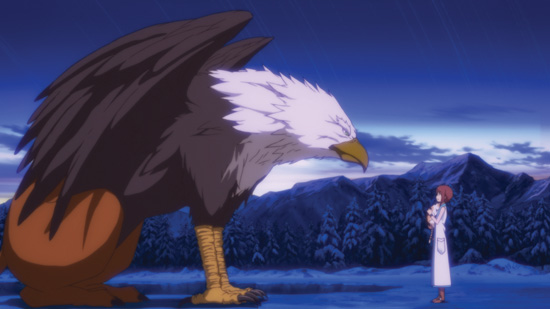 Problem Children offers a thoroughly enjoyable ride. Ludicrous is the name of the game in this series where hodgepodge is the order of the day. “Parallel World Intersection Theory” is mentioned multiple times but never leveraged for anything of consequence. Still, the very mention allows the Little Garden to bloom with characters and artifacts borrowed from Grecian and Hindu myth, Romanian and Japanese folklore, and Germanic legend. Character designs, fashion, and even architecture vary likewise under a justified, all-encompassing aesthetic limited only by the artist’s imagination. (One of the characters is a bunny girl with mood hair!)

That said, lolita fashion is catered to greatly via the inclusion of three such characters, but self-deprecating humor diffuses their pandering by referencing the series’ elements of fanservice. Similarly, otaku meta humor makes even the basest of jokes endearing, such as the tone and phrasing when pointing out the particular outfits planned for game host Black Rabbit by her “friendly” tormentor Shiroyasha, or how she designed Black Rabbit’s skirt to flutter just so as to perpetually maintain her modesty. These running gags honestly come across as fun and not creepy, which is a difficult thing to do. 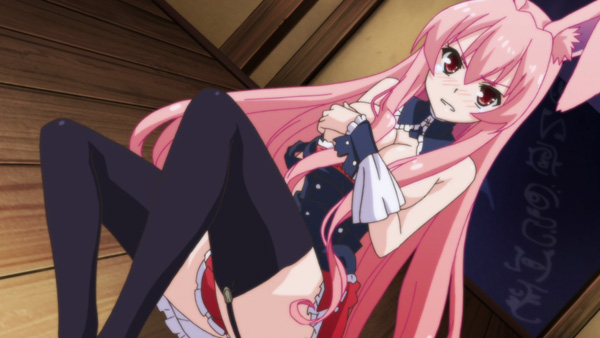 Humor in Problem Children is so much more than in-jokes though; banter makes this show. The camaraderie shown between Izayoi and Shiroyasha, usually while embarrassing/teasing Black Rabbit, is a consistently fun dialog that’s never run to exhaustion. Instead such interchanges are implemented sparingly amidst moments of action or used to break up long-winded scenes of barter, negotiation, or exposition. This also helps keep pacing lively.

Unintentional humor also abounds; first to mind is the ill-fitting ‘80s smooth saxophone music that often accompanies battle scenes. Why? Why not? The sheer outrageousness of Izayoi’s power also causes some giggles. On separate occasions, he actually and effectively dropkicks a beam of light and a cloud. While this does get explained, I find Izayoi battling the elements (literally) simultaneously hilarious and jarring. 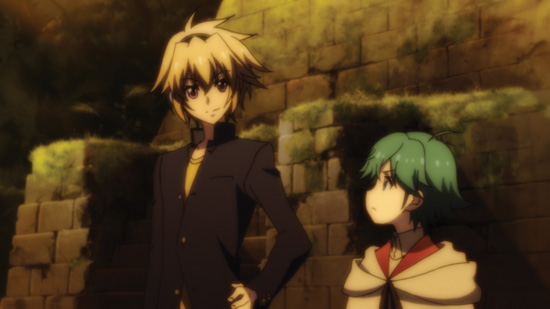 Equally unsettling are intermittent scenes where the animation looks blurry, like a soft filter is being applied for no apparent reason. The art also suffers from spontaneous oversaturation at points; select scenes are overly imbued with rich tones, making changes in color palettes seem drastic. Either/or would be fine, especially as the soft filter effect and richer hues really add to the ambience, but the alternation between both does the series a disservice.

Problem Children, directed by Keizou Kusakawa (Campione!, Sekirei), aired in January 2013. I honestly couldn’t tell you why I started watching it, but I can definitely explain why I kept watching and why I watched it again: it’s a fun show with an engaging wit, good character chemistry, and an endearing sense of self awareness. It feels as though there’s a grand design that’s yet to reveal itself, and the degree to which the world is realized offers great hope that these characters have much more to offer along their journey.

Anime 5053Features 745Problem Children Are Coming from Another World Aren’t They? 1print articles 350

Dimension W Anime Heads to Toonami
MOE!: Is it good, evil, or a sinister concoction beyond understanding?