MOE!: Is it good, evil, or a sinister concoction beyond understanding?

This is part 2 of a feature originally run in the April 2009 issue of Otaku USA Magazine, showcasing a variety of (sometimes contrary) opinions on moe from our international contributors. The issue has been out of print and out of stock for years, so we thought it was worth posting online since, as love it or hate it, moe is still just as alive and kicking today as it was then. If you missed the first part, go back and read it here 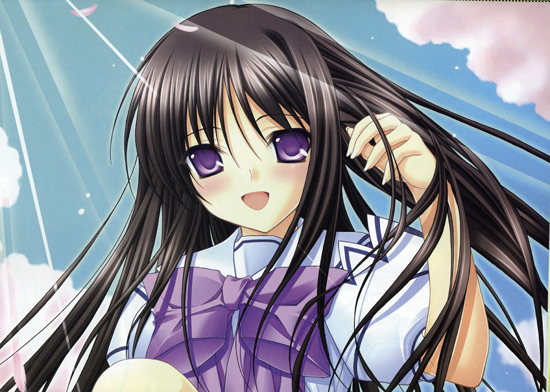 by Tomohiro Machiyama, co-author of Cruising the Anime City: An Otaku Guide to Neo Tokyo

You need three things to develop otaku culture in a society: no war, no poverty, and no hierarchy. Postwar Japan met these conditions, especially during the 80s, and otaku culture was established in Japan as a super, super developed kind of consumerism. But otaku culture itself is a form of arrested development. It allows people to still have that feeling of enjoying childish things, even if they are adults.

In Vladimir Nabokov’s novel Lolita, the protagonist lusts after a young girl to recapture the youth he has lost. But for Japanese otaku guys, that feeling is just the product of being mentally immature. They can’t deal with grown-up women that are older or even the same age as themselves, so that’s why they are attracted to underdeveloped women. 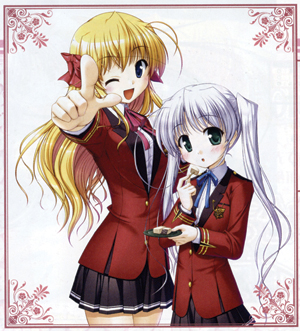 Another side of otaku culture is that it functions as an alternative form of culture for people who have dropped out of the world of “high culture.” Instead of studying subjects like literature, science, and history, otaku instead study subcultures like anime, manga, kaiju (monsters), video games … kids’ culture. So otaku fandom was founded by many amateur academics. It used to be that you could not be an otaku in Japan unless you were an intelligent person. It was actually a very elite world full of specialists.

But the moe phenomenon changed everything. All you have to do now is say the word “moe” and you can be an otaku. The moe movement popularized and generalized otaku culture for the public. Before, unless you could name the monsters from Ultraman or mastered some equally trivial topic, you could not be an otaku.

Today, people in Tokyo’s district of Akihabara love to call themselves “otaku,” but actually, they are not so knowledgeable. Of course, otaku culture can make bigger money than ever before, but the original spirit has been generalized. It is just like the current situation for American comics in the US. Everyone goes to see Spider-Man at the movies, but only a very few people still read the comic books.

Popularization is what kills culture. And otaku culture is dead in Japan. Deader than dead, because moe killed otaku culture. But this situation is kind of predictable.

So otaku culture is dead already. 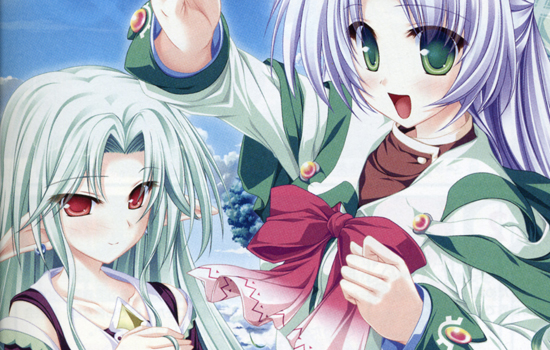 The Middle Path of Moe

Ah, moe. With as gigantic a force as it is right now in otaku culture, it’s basically impossible to avoid it, so we all have to deal with it and not only form opinions about it but usually end up discussing it to death with other people who disagree with us. My opinions on moe are a bit complex, and I’m still trying to wrap my head around the various individual and cultural things that led to its creation and popularity, but I’ll try to condense where I’m at right now.

Part of the problem with discussing moe is that everybody seems to have a somewhat different idea about what exactly it is. Some people say it’s not sexual at all; on the other hand, there’s no shortage of pornographic and nearly pornographic figures, manga, anime, love pillows, games, etc. Some say it covers a wide range of things that make the viewer attached to that character, but sometimes it seems to cover a pretty narrow range of prescribed “cute” looks, personalities, and behaviors. I find my personal feelings vary a bit based on what concept of moe we’re dealing with, so I guess I’ll try to break things down a bit.
First off: the most generic definition, which I’ve heard commonly used on the fujoshi side of things. This basically denotes a feeling or response to a character or pairing; it’s what gets a reaction out of you that makes you want to hug/feed/ogle/love the character. It doesn’t really specify what gets that reaction, however; that’s particular to each person. So in that sense, I can be moe for the girls of Maria-sama ga Miteru and the guys of JoJo’s 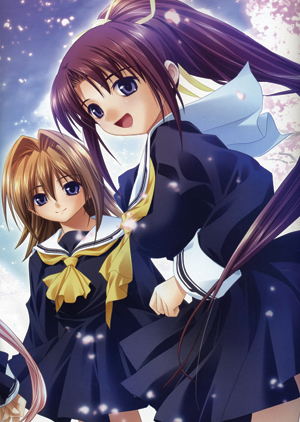 Bizarre Adventure even though there’s pretty much no similarity between them. It’s kind of hard for me to have an issue with that as a concept—sure, I can maybe disagree with or dislike someone’s particular taste, but as a whole it’s too wide to like or dislike.

Second off: the general concept of “cute” that pervades much of moe. I’m kind of neutral on this one. There’re cute things I like, and cute things I dislike, and it’s all about the particular way it’s represented. Card Captor Sakura? Absolutely adorable, and I love that show. Kanon? Hate it, because the characters are totally annoying and horribly written, which makes it harder for me to feel as affectionate toward them, plus the character designs have really wide-apart eyes that make the characters look sort of creepy. Not to mention, I’m female and stuff like Kanon is designed to play on specific male otaku fantasies so, uh, it’s not really something I’m going to be into.

Actually, Kanon is a perfect segue into the third thing often described as moe, and the one that I pretty much unabashedly dislike. This is the moe that consists of cute girl characters who are sometimes loli and basically always functionally retarded, because what fun is a girl who doesn’t need constant protection and assistance so as to constantly stroke your fanboy ego? Look, let’s face it, guys that fit the original definition of otaku are not generally the most enlightened or well-adjusted folks in regard to the opposite sex. Thus that particular brand of moe, origin of many an eroge (erotic game) and maid café, is born which fetishizes childishness and feeds those good ol’ sexist fantasies. It strikes me as the same kind of thing that leads to mail order bride marriages, with foreign women marketed to men specifically based on their submissiveness and controllability—forget the hassle of treating women like human beings, just get an object that’ll stroke your ego and make you feel all big and manly! Unrealistic fantasies are one thing, and true there’s no real women being burned over (well, you could argue about the maid café thing maybe), but I’m figuring a lot of those dudes like it for a reason, so yeah, it’s a bit off-putting.

I guess in total I’m sort of neutral, though it depends on what you mean when you say “moe.” I’m not unwilling to give things a chance and if a show is a good show then fine. I like Lucky Star even though it’s really moe, because the characters were actually likable and I thought it was funny; Magical Pokan is in many ways a terrible, indefensible moe show, but it somehow manages to be hilarious at the same time so I was able to watch it and have fun. But yes, I still hate crap like Kanon (I don’t care if they turned the main character into Kyon) and maid cafés are still pretty lame. 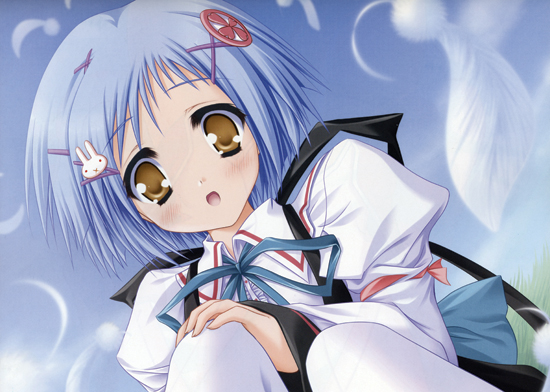 Basically, the Japanese moe phenomenon is not what it seems, nor is it what the moe-loving otaku claim it to be. They say that moe is a “pure” love similar to the Greek concept of “agape.” At least they say it is a platonic love, since it is impossible to have physical contact with animated characters, which is supposed to make it “spiritual” and “pure.”

In reality, moe is strongly connected to SEX. 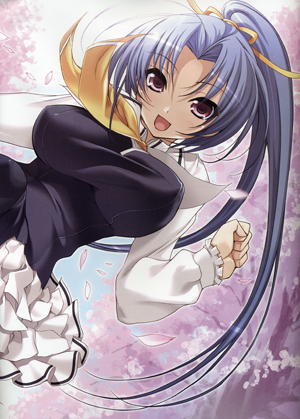 If not, why are moe characters always showing legs, chests, or even their pantyhose? When walking down the streets of Akihabara, all I can see are sexually suggestive characters with cute child-like faces.

Things have been changed. Back in the 70s and early 80s, there were already sexy animated characters in Japan, such as Yuki Mori from Yamato (aka Nova from Star Blazers), and Lum from Urusei Yatsura. They, too, were sexually suggestive, I admit. But people didn’t cry “moe” at them. The difference between first-generation otaku and moe otaku is that the old otaku didn’t claim their love for animated characters was SUPERIOR to real love and sex. Moe people do.

MOE people don’t want to admit it, but deep in their mind, they long to be dominant and masculine, just like Neo in the world of The Matrix. What they don’t want is to have a real relationship with an independent woman. A real woman doesn’t obey, sometimes she back talks. That kind of attitude is not acceptable in the world of moe. They are the kings of an imaginary world, and a king doesn’t want to be hurt at all.

If you missed part one of this feature, read it here.

Problem Children Are Coming from Another World Aren’t They? maps out an intricate fantasy world.
[Review] Livingstone