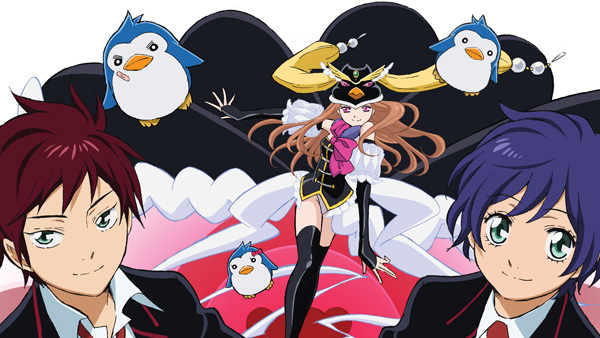 If there’s one thing that anime sorely lacks, it is weirdness. And I’m not talking about the kind of weirdness that is the hallmark of spectacularly crazy anime like M.D. Geist or Crystal Triangle (weird only because of the haphazard approach to plot construction), or the random sort of weirdness of Excel Saga and Hare+Guu (which are more absurdist non sequitur humor than truly “weird”); even well-respected artistic directors like Mamoru Oshii don’t often stray too terribly far from convention (except, in Oshii’s case, for Angel’s Egg).

The kind of weirdness that’s missing is the deliberately crafted weirdness, where great care has been taken to make the anime seem simultaneously familiar and strange, meaningful and meaningless, absurd and poignant. Only two directors have ever consistently hit this particular nerve with me: the first being Satoshi Kon, director of Millennium Actress and Paprika; the second being the director of Penguin Drum and, more famously, Revolutionary Girl Utena, Kunihiko Ikuhara. 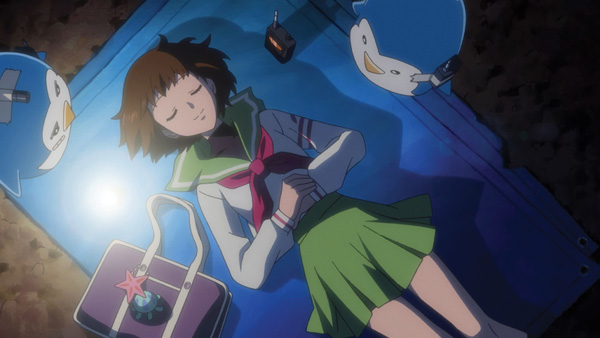 Penguin Drum starts off innocuously enough, taking the apparent form of a light-hearted series about the adventures of the three Takakura siblings. It barely takes half an episode for this impression to completely get inverted, as the brothers Shoma and Kanba find themselves with a rather nasty bargain: either they obey the directives of a souvenir penguin hat that’s possessed their sister Himari to find the “Penguin Drum,” or else face Himari’s death considerably sooner than it would otherwise be. To aid them in their quest, a trio of penguins arrives shipped to their door, each coded to the sibling’s personalities and featuring a handy identifying number on their back.

What follows only serves to highlight how mundane the first episode is, comparatively speaking. There’s a
stalker schoolgirl, an heiress armed with a ping-pong ball rifle (whose ammunition forces you to remember suppressed memories), a charmingly sinister doctor, and a few more that might be a little more spoilery to mention. It’s not weirdness for weirdness’s sake, though: there’s method to Penguin Drum’s madness, and it stays internally cohesive and connected even as reality gets tossed out the window. 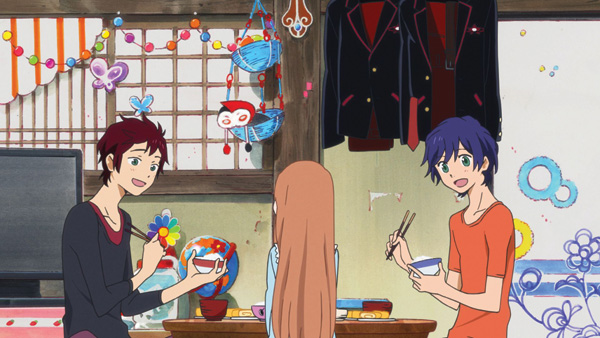 The catch to the cohesion, though, viewers have to constantly consult their personal Symbolism Decoder Ring to piece the series together. There’s a strong central theme—fate, and the many possibilities there are to alter it—and clear pieces to the puzzle—an excellent prep for a serious viewing of Penguin Drum is Haruki Murakami’s After the Quake. Even with these, this only keeps the plot coherent and unified; Penguin Drum relies almost entirely on viewer interpretation for any relevancy the series holds.

Unlike other symbolism-heavy anime directors, though, Ikuhara leaves his imagery wide-open to individual interpretations. Take the penguins, for example: they often pull double duty as both comic relief and running commentary on the nature of the sibling they are attached to, though it’s difficult to tell when it’s one, the other, or (probably more often) both simultaneously. The entire cast mostly ignores the penguins after their introduction, leaving them to operate as detached commentators on the proceedings around them. From this, any given action by the penguins can come to have a particular meaning, if someone’s inclined to read them that way. 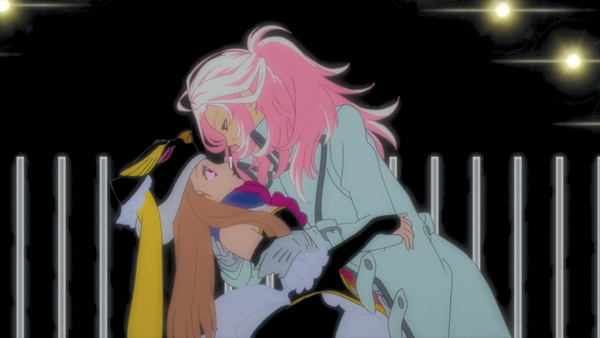 This focus on individual interpretation means the series is at its best during the more surreal sequences, where Ikuhara is free to toss out abstract imagery at an obscene clip. The most common of these are the Survival Strategy sequences, always invoked by a penguin-possessed Himari, which are always highly colorful, often extremely suggestive, filled with
double helix imagery, and open with an electropop cover of 80s Japanese arena rock song “Rock Over Japan.” When this sequence pops up in the first episode, it tells you exactly what you just signed up for—if you’re just wanting to
sample the series, watching the first episode or two will quickly tell you whether Penguin Drum is for you.

It would be easy for these sorts of surreal sequences to descend into overwrought pretension, but Ikuhara has a keen sense for absurd humor that blends effortlessly into the mood of the scene, and keeps everything from getting too weighty. Penguin Drum is arguably an experimental series; much more conventional than Maasaki Yuasa’s Kaiba or Kemonozume, but as a result more accessible and relevant to a larger audience. 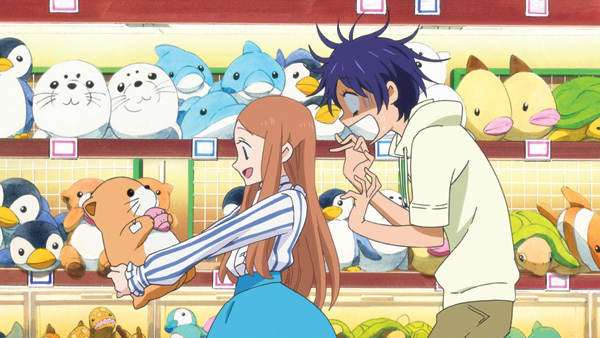 The only real downside to Penguin Drum is the slightly awkward pacing. For a 24-episode series, the early episodes seem oddly slow to get the ball rolling, and the later episodes feel a little too crammed for comfort. This is partially intentional due to jo-ha-kyu (and Ikuhara has a little more ground to claim this), but it feels more like the series and story were planned for at least a few more episodes and then had to be compressed to fit. It doesn’t break the series, amounting to perhaps a minor gripe, and likely comes down to personal taste.

I’ve a certain kind of envy for those who get to watch Penguin Drum without having seen Revolutionary Girl Utena beforehand. Utena has had such an impact on me over the decade it’s been since I first watched it that it’s difficult for me to let Penguin Drum stand on its own; the failure is mine, as it’s difficult to overcome that sort of emotional attachment. I can see how Penguin Drum could easily have that impact on viewers, as it tackles an enormous amount of social and psychological issues common to the modern adolescent (anime fan or no), and provides the open space necessary to draw one’s own conclusions, and—perhaps—the motivation to transfer your own fate, however dangerous it is.