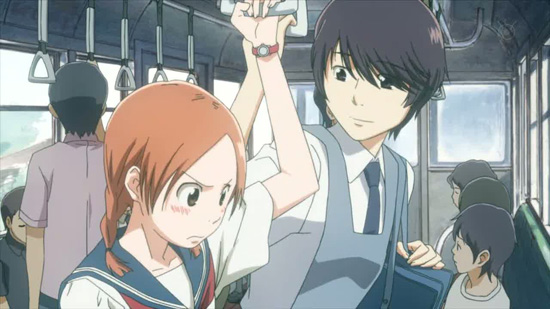 The rise of yuri as an identifiable subgenre of anime and manga has brought some distinct oddities with it. One of the biggest oddities—and the one most relevant to AOI HANA: Sweet Blue Flowers in a roundabout way—is that yuri very rarely deals with actual F-F relationships, relying instead on very close friendships between girls and women. Part of this is the indirection on relationship matters common in media, which lets the viewers fill in the blanks as they see fit—nothing any given story does, be it romance or the deeper meanings of life, can really be as personal to any viewer as the story they themselves construct around the gaps—but it’s also that most yuri anime and manga aren’t written for a lesbian audience. Most of the most popular recent titles—Maria Watches Over Us comes to mind—rely heavily on the “sistership” theme that dates back to the 1920s, the establishment of girls’ schools in Japan, and the Class S literary style.

In that light it seems almost reductive to assign Sweet Blue Flowers to the yuri genre, given that it takes a common setting—the all-girls school—and lets its characters actually explore sexual orientations and be lesbians without relying on a “sistership” buffer. But that suggests that yuri cannot be simultaneously relevant to lesbians and nonlesbians alike—it’s long been a suspicion of mine that yuri functions as a safe zone for identity exploration for all its readers, whoever they are. So let us save the genre semantics natter for a sidebar and move on with the matter at hand. 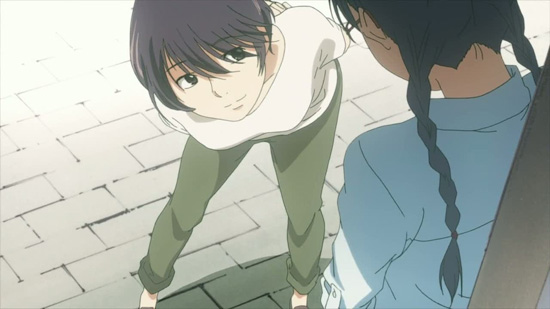 Sweet Blue Flowers starts with two very important meetings for Fumi Manjome: the first with her former childhood friend Akira, though neither recognizes the other at first; and the second with Yasuko Sugimoto, a popular and boyishly handsome basketball club member. Still reeling from the news that her cousin Chizu—on whom Fumi always had a secret crush—is getting married shortly, Fumi accepts Yasuko’s sudden invitation to go out with her. Their relationship quickly progresses, leaving Fumi with little choice but to reveal the relationship and come out to Akira.

With 11 episodes covering roughly a year’s worth of time, Sweet Blue Flowers seems to move fairly quickly, which can be a little disconcerting for a series that otherwise relies on a slow, languid pace. It’s very likely that any pacing oddities can be chalked up to the fact that the series relies less on large-scale melodramatic events (like many other romance anime) and more on individual experiences at specific moments in time. The focus is much more personal, on the experiences of being young in Japan, rather than on the twists and turns that relationships take. Which isn’t to say that there aren’t twists and turns, heartbreak and catharsis—they’re very definitely there, often with a complex treatment of the emotions and events that lead to and result from them—but those events aren’t the primary strength of the series. 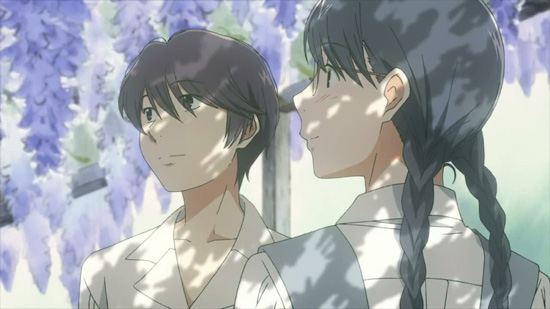 Pulling the focus off the plot-important events is what makes the series a fairly significant departure from its predecessors. Older yuri classics like Dear Brother and Shiroi Heya no Futari (see sidebar) earned their hefty emotional weight through exaggerated events and the melodrama common in 70s shojo; contemporary yuri series follow this trend by and large. Part of the more mature handling of the subject matter can be chalked up to the fact that the original Sweet Blue Flowers manga is serialized in a josei manga serial, and is therefore written with an adult audience in mind, but it’s also a testament to a broader audience for yuri-flavored manga and anime that a title that handles lesbianism with maturity is viable for publication, let alone an anime adaptation.

More than likely, Sweet Blue Flowers isn’t heralding a bold new era of yuri on its own; Takako Shimura is excellent (she also writes the amazing Wandering Son, which centers on a pair of M-to-F and F-to-M transgender characters), but she is also a single individual. What it does seem to indicate, though, is that yuri currently has a diverse enough audience to sustain a serious take on its subject matter (especially considering that Japan is more conservatively reserved about matters of homosexuality) along with the more melodramatic and innuendo-laden titles the genre is currently known for.