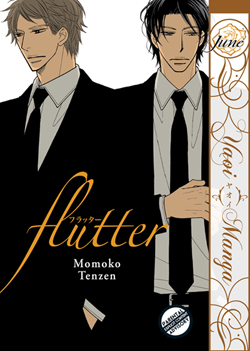 Hearts are fluttering and blood is spraying (and the puppies are baking…?)—there’s some great diversity in titles this week including a handful of brand new series. Up for something old or something new? Though really it’s easier to just enjoy it all, right?

Digital Manga has two new boys’ love one-shots out this week, each perfect for a tidy little fix of the genre. In Flutter, sparks are quick to fly between two businessmen who are paired together on a big project. The book is created by Momoko Tenzen, who has already had a number of books published by DMP, including Suggestive Eyes and Ciao Ciao Bambino.

Secretary’s Job is another title drawn by a repeat author for DMP, but this is only Miki Araya’s second time being published in English. I found her previous title, I’ll Be Your Slave, pretty hilarious and weird so I’m looking forward to seeing if Secretary’s Job is similar. This story follows a “star secretary” known for helping bring success to anyone he works with. While he’s yet to fail, he suddenly finds himself in the presence of the biggest challenge yet when his boss assigns him to a lazy, unmotivated man who also happens to be the boss’ son.

Always an absolute must-have, must-read-now for me is Fantagraphics’ release of Wandering Son. Fantagraphics has an unfortunate habit of pushing back the release dates of this title so I’ve since stopped trying to keep track of when it comes out. When it does come out, though, it’s always thus a great surprise! This time it’s volume three and, as in the volumes previous, there’s plenty for the brain to chew on and the eyes to absorb. 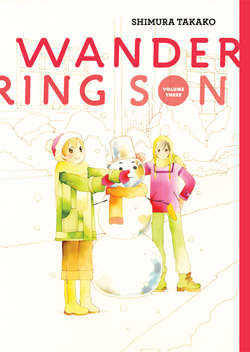 Wandering Son is a story that follows a young born-boy who wishes to be a girl, and a young born-girl who wishes to be a boy. The two go up against the jeers and confusion of their friends and family almost as much as they struggle against their own internal conflicts. Every character feels so real. A big part of this is a character you love one moment could say or do something that makes you feel awful the next – they’re unpredictable and multifaceted, fueling the story to feel more realistic. In this volume, Nitori is accepted into a modeling agency and makes a new friend, while Takatsuki is upset by the pressures of their classmates’ teasing when it escalates.

Seven Seas is debuting three new series this week – Angel Para Bellum, Jack the Ripper: Hell Blade and Alice in the Country of Clover: Cheshire Cat Waltz. Angel Para Bellum follows a young man who apparently “holds the key” to prevent a war between heaven and hell. When his life is threatened by hordes of demons, two gun-wielding female defenders step in to protect him. Fans of Dance in the Vampire Bund will recognize the work of the story’s artist. 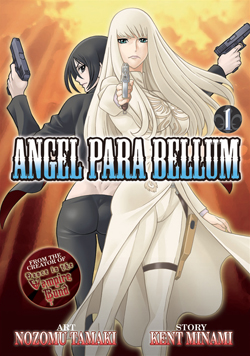 Of the three new titles, though, Jack the Ripper: Hell Blade is the one that really catches my interest. It’s a take on the classic true story of London’s Jack the Ripper and the cover alone suggests some really gritty content with cool artwork. The story’s lead is a young police officer who is on the hunt for the murderer who has gripped the city in fear. What he discovers when he finds him is more than he was expecting or ready for. What that is, though, I have no idea, but I’m really curious to find out.

Seven Seas is also releasing their third omnibus edition of My Boyfriend is a Vampire, a silly but fun story about a pretty boy who turns into a girl after being bitten by a vampire.

Viz Media’s BL arm – SuBLime Manga – is releasing their newest print editions, including one of my most anticipated-in-English titles, Awkward Silence. I own the volumes of this series in French already but with my reading comprehension rather limited, I was excited for the day this adorable Hinako Takanaga series would be licensed in English. It’s one of the creator’s longer series at 4+ volumes, and follows the budding romantic relationship (and related friendships) of a young man who has trouble expressing himself verbally. 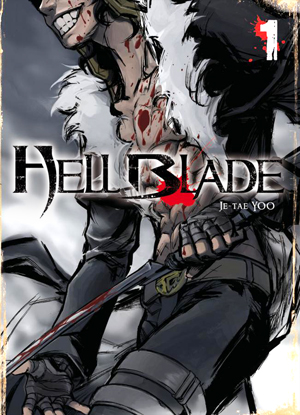 Rounding up the week with something super fluffy comes the (aptly named) Fluffy, Fluffy Cinnamoroll (Vol.04). In this volume the puppies open a crepe shop in the woods but find catering to the different inhabitants’ tastes is no simple task. Crepes made of worms… really??