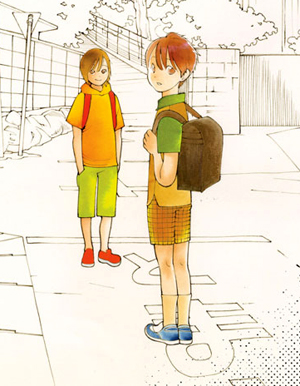 It should come as no surprise that manga is a rich medium for exploring gender issues; boys’ love/yaoi content is famously infamous within fandom, and girls’ love/yuri is becoming almost as recognizable, if not as emblematic for manga, as its male/male counterpart. Yet for all the ways in which these stories can encourage readers to question gender norms—whether intended by the manga or not—more often than not, these stories presume a heterosexual audience. With notable exceptions, BL manga is often written by and for a straight female audience, and GL manga is increasingly written by and for a straight male audience. This, more or less, is how a manga like Shimura Takako’s Wandering Son, with its direct treatment of transgenderism, feels simultaneously natural and singular in the world of manga.

The first volume of Wandering Son follows two friends, Shuichi Nitori and Yoshino Takatsuki, through their fifth-grade year. Shuichi is a very feminine boy—in fact, a teacher initially mistakes him for his older sister Maho—and quickly becomes friends with the tomboyish Yoshino, who sits next to him in class. During a study session at Yoshino’s house, she offers Shuichi a dress that her mother had bought for her, despite her protestations.

The dress—and the allure of wearing it—eludes Shuichi until after a second study session, where another classmate, Saori Chiba, offers Nitori a headband (and proclaims how cute he is in it). Only then, after his family has left for the day, does Shuichi feel comfortable to wear both around the house—only to be discovered by a very delighted Chiba as she stops by to invite him to her birthday party.

As the year moves on, he finds himself growing more comfortable with the idea of dressing up and being seen as a girl. Meanwhile, Yoshino has her hair cut to a men’s length and style, and bustles about town in a boy’s school uniform, getting propositioned by a high school girl in the process. Both Shuichi and Yoshino are toying with their identities at an age where identity formation truly begins, adding the feeling that they’re not meant to be the gender they are to the usual anguish of youth.

The true distinction of Wandering Son is not its subject matter so much as Shimura Takako’s quiet and sensitive handling of it. Fifth grade is a difficult time and age for any author to handle well, and throwing transgenderism into the mix merely adds to the challenge. By keeping the story’s focus on the intensely personal thoughts, experiences, and emotions of the characters, Shimura avoids both heavy-handed preachiness and overly melodramatic scenes, keeping the tone of the story sympathetic and realistic and—most importantly—a story.

Those familiar with the history of manga and of gender issues in Japan will no doubt be as thrilled as I was to see the references to the Takarazuka revue and Riyoko Ikeda’s legendary manga The Rose of Versailles (the class opts to perform the Takarazuka adaptation of The Rose of Versailles as the farewell play for the sixth grade, with the boys playing the female roles and vice versa), but it’s certainly not necessary to understand that to appreciate Wandering Son. Neither, for that matter, is needing to have questioned one’s gender. Wandering Son avoids being a “problem manga” about transgenderism, and is all the better for it.