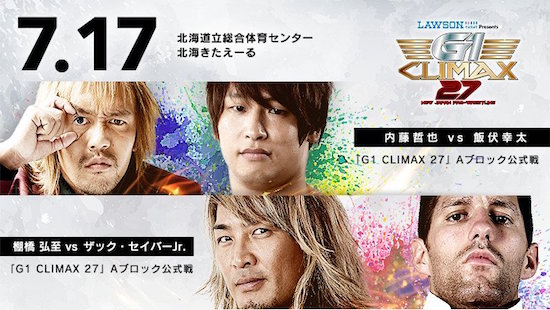 If you’re just now joining us, be sure to check out our G1 Climax primer!

Night one of the G1 Climax saw an evening that began as sport, but ended as a raw expression of the inherently self-destructive human soul. A fantastic way to kick off the tournament. 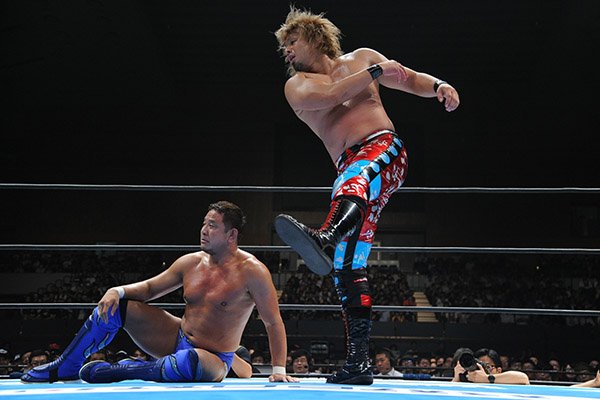 The forty-nine-year-old Nagata enters this his nineteenth and final G1, while YOSHI-HASHI makes his second trip around the block.

YOSHI-HASHI found success when utilizing his speed and propelling off the ropes, rather than going toe-to-toe with the grizzled veteran. Engaging in the latter nearly had “The Head Hunter” tapping the mat, but he persevered to land his signature finisher “Karma,” putting Nagata down for the one, two, three. A rough start for “Blue Justice” in his G1 swan song.

That makes YOSHI-HASHI the first man to get his name up on the scoreboards with two points. 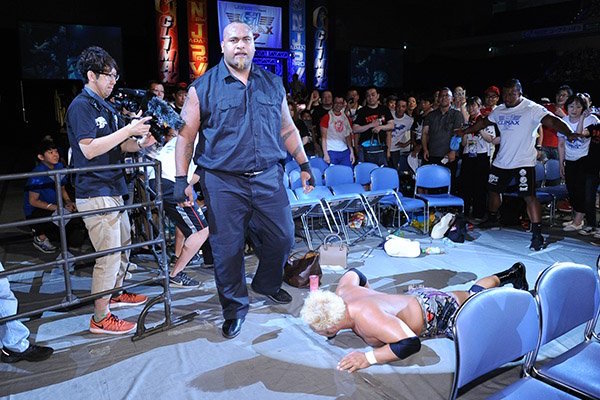 Makabe, as always, arrived wearing a set of chains that would make the Junkyard Dog bark with envy. Chains that ended up wrapped around his neck a little tighter than usual when Fale used them to toss Makabe straight through the steel barrier.

Makabe barely made it back to the ring in time to beat the referee’s count, yet found his second wind as the two enormous men had themselves a trash talk-laced big boy brawl—most of which is not fit for print. Makabe went for a King Kong knee-drop, but came up short, allowing Fale to counter with his patented “Grenade” choke-slam for the win.

The only one with “bad luck” tonight wound up being Makabe, as Fale left bloodied, but not beaten in a decent match. 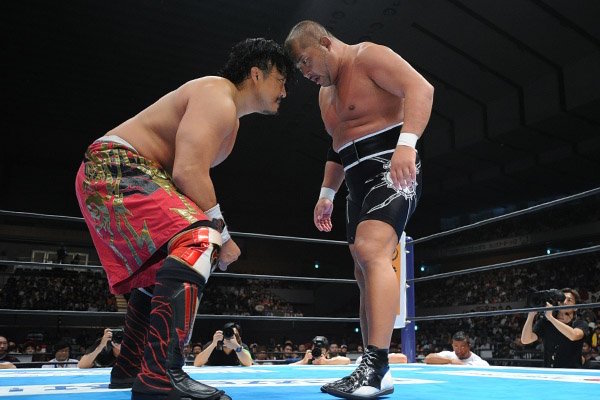 Goto is the 2008 G1 winner, and a 2016 finalist with the reputation of being always a bridesmaid, but never a bride when it comes to the IWGP Heavyweight title. Ishii, meanwhile, is arguably the toughest man in the tournament. And on the planet earth.

The story of this match was basically: Who could take the most continual headbutts and lariats and not die? I almost feel guilty for loving it as much as a I did.

Goto eventually put Ishii down with the GTR, nearly taking his head clean off in the process. An upset in my book, but not necessarily a shocking one. Always a pleasure watching these two shorten each others’ lifespans. 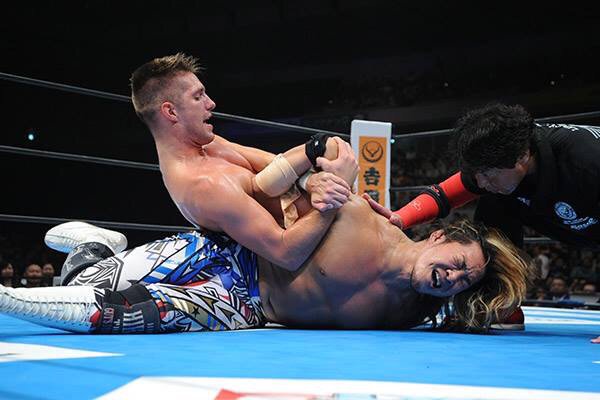 Fun fact: Tanahashi suffered a severe bicep tear some months ago that he declined surgery for in order to compete in the G1. A decision that will likely leave him with a permanent deformity. Nonetheless, he came to the ring with perfect ten hair to go along with his bicep tear.

Not an ideal look for a date with a man whose speciality is the twisting of one’s limbs. That man being Britain’s own Zack Sabre Jr, the smallest entrant in the G1. And while his technical wizardry should be enough to balance out any size differential he may encounter, a high-protein diet and a few trips to the weight room certainly wouldn’t kill the lad.

Sabre was slow to go to work on Tanahashi’s injured arm, but it wasn’t out of any form of mercy—he was simply looking to make it count. But Tanahashi rallied to dish out a bit of payback in the form of attacking Sabre’s underdeveloped leg muscles, setting the stage for the High Fly Flow.

Sabre’s Suzuki-Gun stablemate Desperado hopped up onto the ring apron as Tanahashi went to launch off the top rope, distracting him just long enough for Sabre to recover and lock up the damaged arm, securing the tap. It was never going to end any other way.

A huge, if not tainted, win for the Brit. I expect him to challenge Tanahashi for his Intercontinental belt sometime in the fall. I also expect that my hopes for Suzuki-Gun to be barred from ringside during the G1 will go unfulfilled, along with the hope that Sabre can develop a decent set of pecs. 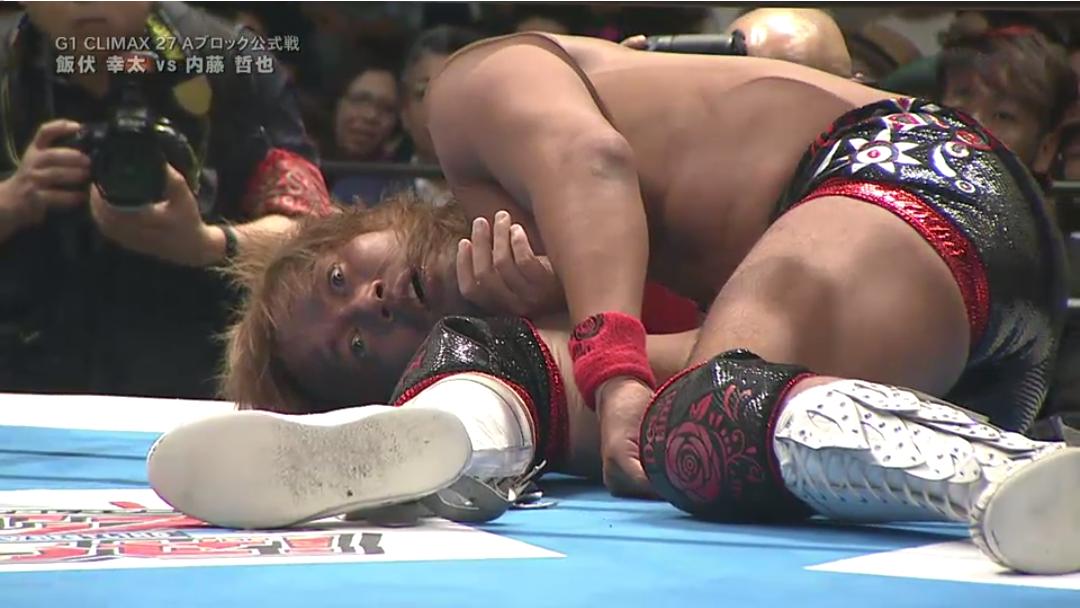 I could tell you that Kota Ibushi is returning for his first G1 in two years. I could also tell you that Tetsuya Naito is the A Block’s man to beat. I could describe how one of them was spiked into the corner headfirst, or recount that piledriver off the second rope. But what transpired here cannot be captured with factoids, or by the recapping of moves.

No, it was a contest that made me question whether these two were competing with each other, or the Grim Reaper itself—death the actual trophy they seek. Did they just set a dangerous bar for others to clear, or did they reveal a dark truth that most are simply too afraid to admit?

By the way, Naito hit the Destino for the win, as if that really matters.

Well, that wraps up night one, and in the A Block it’s YOSHI-HASHI, Bad Luck Fale, Hirooki Goto, Zack Sabre Jr, and Tetsuya Naito with two points a piece, while everyone else trails with zero.

Thursday will see the B Block heat up, with Kenny Omega and Minoru Suzuki headlining in a match that will surely make small children cry. See you then!