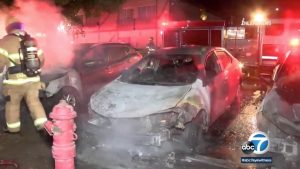 An arson case that took place during this weekend’s Anime Los Angeles convention ended up spreading from a single car to seven, leading to scorched vehicles in the Azure Hotel and Suites parking lot. Video surveillance supposedly showed a man dumping two cans of gasoline on the first car, failing to set it ablaze with his cigarette, and then finally getting the job done with his lighter.

Ontario, CA police have since arrested the suspect—a 27-year-old man named Matthew Masumi Toyotome—on suspicion of arson. Toyotome apparently knew the owner of the car he initially targeted, and convention attendee Julia Moreno Jenkins later confirmed this on Instagram. Jenkins describes the arsonist as an “obsessed stalker” who targeted and attacked her vehicle specifically.

Here’s the post, which also links to a GoFundMe page to help recuperate costs:

All this has been happening on Facebook but for those who haven’t seen or heard yet, my car was set on fire while I was attending Anime Los Angeles. My car was specifically targeted and attacked by an obsessed stalker. After getting many encouraging words to set up a gofund me, I set one up. Please do not feel obligated to donate, but if you can, sharing it will be incredibly helpful. Thank you so very much, I appreciate all the love and support I have received from the cosplay community and my friends and family during this terrible time. Thank you everyone, I am so very grateful to all of you. https://www.gofundme.com/car-set-on-fire-at-ala-by-obsessed-stalker?sharetype=teams&member=1488702&rcid=r01-154743872435-faddec2e11054fdf&pc=ot_co_campmgmt_m #gofundme #arson #alafire #ala2019 #cosplay #cosplaycommunity #victim #carsetonfire #psycho #fire #news #attack #carfire #destoyedcar #totaledcar #goodbyecar #goodbyeStarlink #Starlink #subaru #subaruoutback

Thankfully, there were no reported injuries during or after the incident.