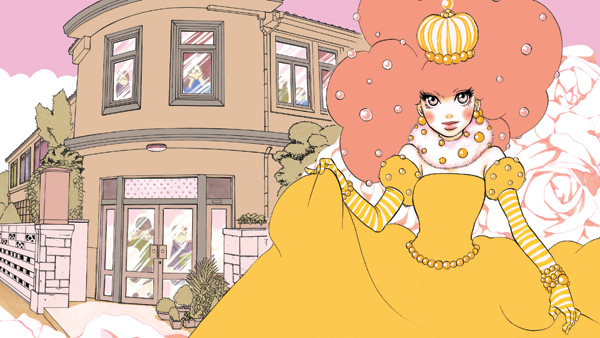 They say that your favorite pet shows your self-image: if you think of yourself as a quiet individualist, you’ve probably got a cat; if you’re outgoing and sporty, you might own a dog. Tsukimi loves jellyfish, whose otherworldly grace has fascinated her ever since she was a little girl walking on the beach with her mother.

Now, her mother’s gone and Tsukimi has moved to Tokyo to study art … and grown up into a fujoshi with thick glasses and a room filled with jellyfish paintings! The grown up fangirl lives in Amamizu-kan (“the nunnery”), a rundown old apartment building full of nerdesses even weirder than she is: a train nerd, a Japanese antiquities nerd, a Chinese history nerd, and a reclusive Boy’s Love manga artist who hides in her room and communicates with notes passed under the door.

Tsukimi and her friends are terrified of “stylish folk,” but when Tsukimi is thrown out of a tropical fish store, she’s picked up off the street by a gorgeous beauty with long hair. “This girl is the exact opposite of me…. She’s using that beauty to live boldly and fearlessly,” Tsukimi thinks. Spoilers ahead: the stylish girl follows her back to her house, where she takes off her wig and Tsukimi discovers that she’s a crossdressing boy!

Kuranosuke is the rebellious son of a Japanese politician who acts out because he looks good in a dress and because it annoys his brother and father (“If I convince people I’m a weirdo now, life will be easier in the long run!”). At first (in fact, for a long time) Tsukimi is too scared to talk to a boy, but Kuranosuke overcomes her objections and insists on hanging out and sharing his fashion tips. In fact, Kuranosuke’s makeover brings out Tsukimi’s natural beauty so well that when Kuranosuke’s brother sees the new Tsukimi, he falls in love with her at first sight. 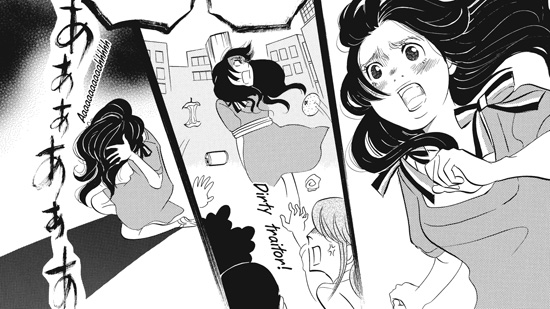 Soon a Cinderella story/love triangle is afoot, set in a background of socially maladjusted Japanese geek girls, fujoshi. Some online readers complained about Princess Jellyfish on this score, saying it was laughing at nerds instead of with them: the otaku here don’t come off as adorable, so much as they seem like a bunch of unemployed 30-year-old misfits who live off their parents’ money and bluntly tell strangers they don’t want to be friends. But the caricatural portrayal fits Higashimura’s caricatural, unpretty artwork (only Tsukimi and the boys occasionally look cute), and comes off as a nice corrective to the glowing portrayal of fujoshi in works like My Girlfriend’s a Geek; and if realism is the issue, this is a story where one of the romantic leads is so dumb he can’t recognize the woman he loves when she’s wearing glasses.

An old-fashioned fairy tale romance at heart (“All girls are princesses from birth!”), the art has its rough spots, but there’s quirky fun here for readers who—imagine this, in a manga!—can activate their suspension of disbelief. Recommended.

The Glory of New Japan Pro-Wrestling on AXS TV
[Review] Eden of the East: Complete Collection