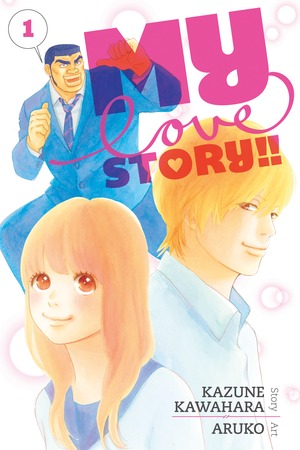 There’s a lot of shoujo romance manga with pretty boys out there, but My Love Story!! has a different take on this. The pretty boy isn’t the hero… this time, the guy who isn’t considered aesthetically pleasing in manga gets to be the hero for his heart instead of his looks.

Takeo is a really big, buff guy with bushy eyebrows and sideburns. People who look at him sometimes totally misjudge him, thinking he’s dangerous. They couldn’t be further from the truth. Takeo is a sweetheart who often falls in love, but so far every girl he’s loved is interested in his attractive best friend, Sunakawa. Sunakawa looks like the typical shojo romance heartthrob, and he has no interest in dating. Each girl who approaches him finds her heart broken.

Then Takeo helps a girl who’s being harassed by a creep on the train. Sunakawa is also there and also helps, but not to the same degree as Takeo. The girl, Yamato, starts hanging out with the two of them more and can’t stop blushing. Takeo is convinced it’s another example of a girl falling for Sunakawa.

However, this time the girl Takeo is interested in is interested right back at him. The two start a sweet and somewhat awkward relationship. Takeo is a really nice guy, the kind of guy who (literally) saves kids from drowning and helps cats that are stuck up in trees. And Sunakawa’s take on the shoujo hero is awfully funny. He acts too cool for this world, but while that elitist behavior is usually forgiven in manga, this series shows that acting better than others really isn’t sexy. Kindness is what’s attractive.

While these two characters are good leads, Yamato’s character is pretty one­-dimensional so far. She’s the innocent, big­-eyed girl who’s always baking sweets. In fact, she’s so innocent that Sunakawa’s older sister (who, it turns out, also has feelings for Takeo) thinks that Yamato must really be hiding something. It’ll be nice to see more of Yamato’s character come out to figure out who she really is.

This manga is written by Kazune Kawahara, the creator of High School Debut. It’s good to see a story that exemplifies personality triumphing over how people are “supposed to look.” (The mangaka even comments that her editor gave the tagline “Ugly guys are in,” for this piece when it was published in a magazine, and she, Kawahara, took offense. “That’s pretty rude, isn’t it?!” she wrote in response. “I don’t think he’s ugly… Takeo is pretty cool!”) So far the story feels as innocent as Yamato appears to be.