A game series that everyone has been raving about in recent years is the Monster Hunter franchise. As the name states, players take on the role of an individual searching for nefarious creatures to take down. Along the way, players strengthen their skillsets on their weapons of choice as well as gain recognition as the best in the land. This game’s impressive graphics allows gamers to view their quarries in remarkable detail, revealing the painstaking details in the designs used. Because of the game’s popularity, Otaku USA knows that you’d love to get your hands on some amazing figures for your collection. This is why our team has done some hunting of their own to bring you our recommendations for the best Monster Hunter Figure. Enjoy! 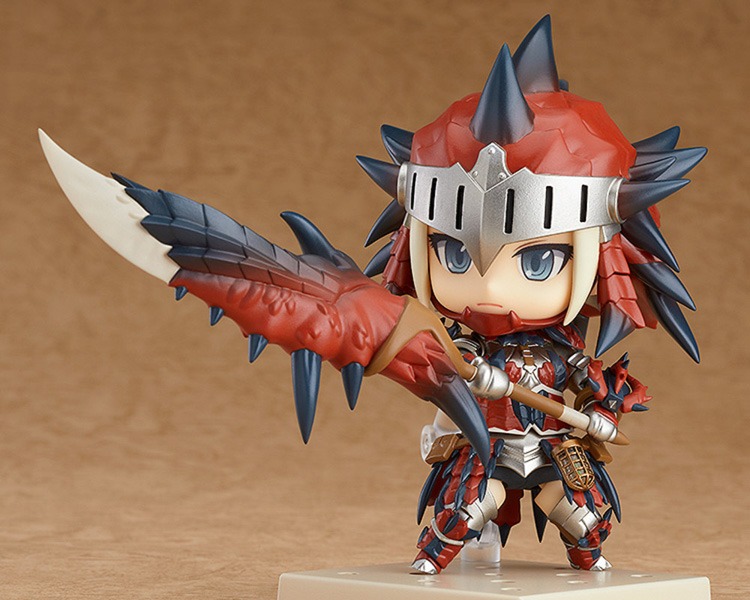 Want to show off a powerful armor set? Then our number five is the pick for you! Here we have a female warrior dressed up in a set of armor resembling a Rathalos. Standing 4” tall, this chibi fighter is ready to pack a punch as she takes out her prey! She is beauty. She is grace. She is ready to bash in a monster’s face!

Pros: Even in this form, the armor still looks pretty cool. The might of the iconic monster is easily seen in the details of this piece. She comes with two faceplates that show her in a neutral state or in a powerful rage. For protection, she comes with her trusty sword “Red Wing” along with her hunter’s carving knife. She has the normal points of articulation that you would expect from a Nendoroid figurine, allowing you to pose her to reenact your best kill moments. At the time of writing, she is in stock, so get her while you can!

Cons: This one is a Nendoroid, meaning that she is of a chibi appearance. If you want a more realistic figure, she is not the one for you. While the armor is cool, we do wish that the coloring matched the creature in question better. The Rathalos is known for its reds and blacks. The coloring feels a bit off. The red looks more like a shade of brown while the black appears more navy blue. She’s still cute, but for those who are looking for accuracy, this little lady could use a few tweaks to her wardrobe. 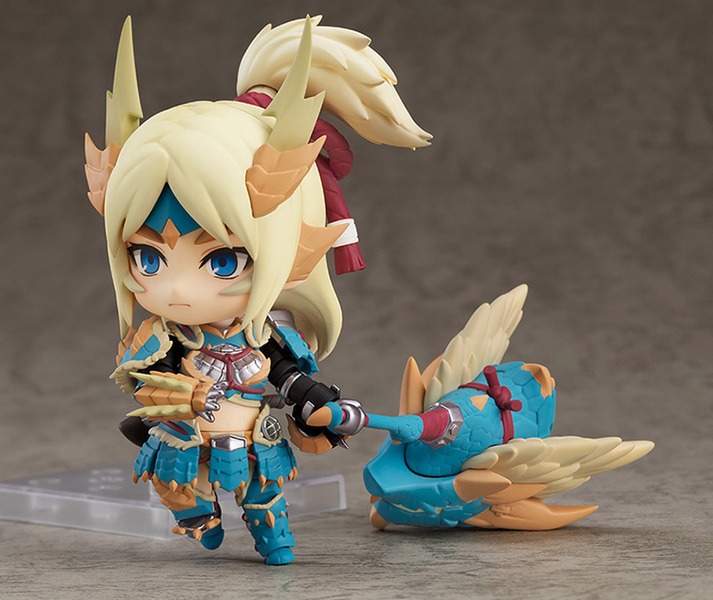 Appearing at number 4 is a powerful lady showing off what she’s able to do! Dressed up in armor that pays tribute to the mighty Zinogre, this warrior is ready to take out monsters and other enemies left and right without batting an eye. To have this 4” powerhouse on your shelf is to be able to rest easy that you and your figurines are protected from anything.

Pros: You have two versions to choose from here. You have the normal version and the DX version, which comes with more parts for ultimate fun! With the normal version, you get two faceplates, the Usurper’s Thunder Hammer, her carving knife, and a lightning effect piece to show off all her best moves. The XD version comes with all that along with an additional hair part as well as the Usurper’s Rumble Bow! As for the facial expressions, we adore her war face. Her baby blues transform into golden hues as she smiles in triumphant glee! The outfit itself is very well sculpted and detailed. Even in chibi form, this outfit appears powerful! Thanks to all the extras, you’ll be able to recreate your favorite kill moments with remarkable accuracy!

Cons: As of the time of writing, this warrior is available for preorder with a release date of late July 2021. If you don’t mind waiting for summer, we suggest placing your preorder quickly! We also want to remind folks that she is a Nendoroid figurine, meaning that she is meant to have a chibi appearance. For those seeking realism, you may want to reconsider. For everyone else, this is the cutie you want to have on your side. 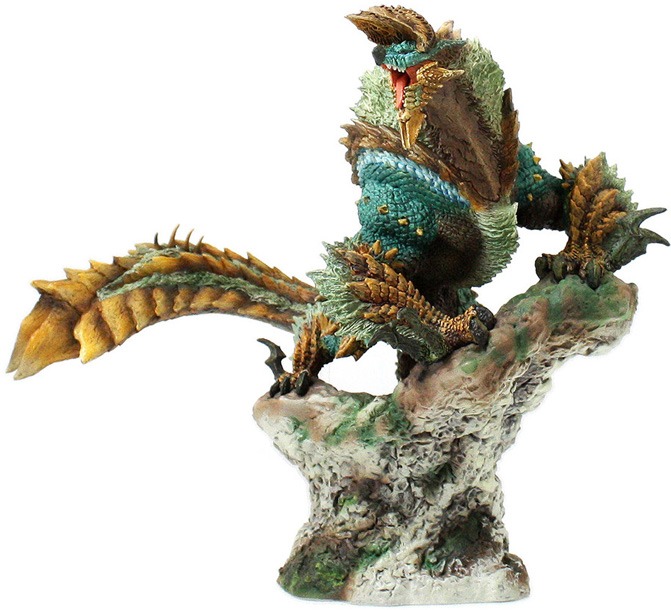 Zinogre stands proud and tall as our number 3. Another wyvern, this one is well known for its electrical attacks. He stands a little over 7” tall, roaring at all within range to let them know that this area is defended by a mighty creature.

Pros: This beast is a killer, and crafting him for the real world is no small feat! We see his scales in great detail all over his yellow and blue body. The fur-like scruff on his body is even crafted to appear as it does in the game. His spikes are lying flat, meaning that he isn’t charging up yet. His eyes are very detailed for being so small in the scale of things. You can’t help but be captivated by them. They show his ferocity and intelligence. As monsters go, this is one you really want to have guarding your domain.

Cons: As of the time of writing, this beauty is available for preorder with a release date of late March 2021. As beautiful as the posing is on this sculpt, we do wish that it showed off some of his power. This one is known for electrical attacks. A similar pose that shows him partially charged with lit up blue specks along his body would be an amazing way to show off his fighting potential without having to add the electricity arcing from his back. Showing off an energy attack is very hard to do in this medium. This piece was sculpted with love, but we would like a little more attention given to his power set. 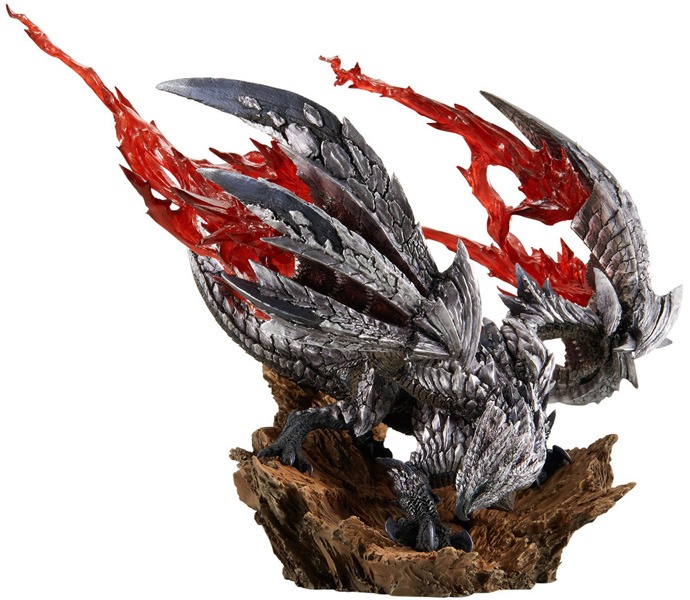 We’re showing our respects to this elder dragon by placing them at number two on our list. This gleaming, powerful dragon is truly a sight to behold. Don’t behold for too long without taking action, for this creature is extremely powerful and able to defeat you in one of many ways. Perhaps admire from a distance if you do not plan to take them down.

Pros: This piece is a work of art! They stand ready to attack as they eye you with their piercing blue eyes. Standing just under 9”, the design work on this model is very well done! The silver scales stand out all over its dark body. Small piercing blue eyes really stand out, giving you chills as you can easily believe that this intelligent creature can size you up and attack at any moment. The energy streams from the wings match how they normally appear in the game. This being stands ready to judge your intentions and react as needed.

Cons: While the energy streams are cool, we do wish they appeared more like energy. Art and game depictions usually show this energy as flames. The paintwork is very red and has a sheen to it, but it falls flat in appearing as fire. Making these parts partially transparent or an ombre paint job may help fix this issue. We go from red to a dark red at the tips instead of a bright flame color to red to dark red. This dragon is also known for changing the shape of its wings to provide different attack types while this is a solid piece. As of the time of writing, this elegant beast is available for preorder with a release date of late March 2021. 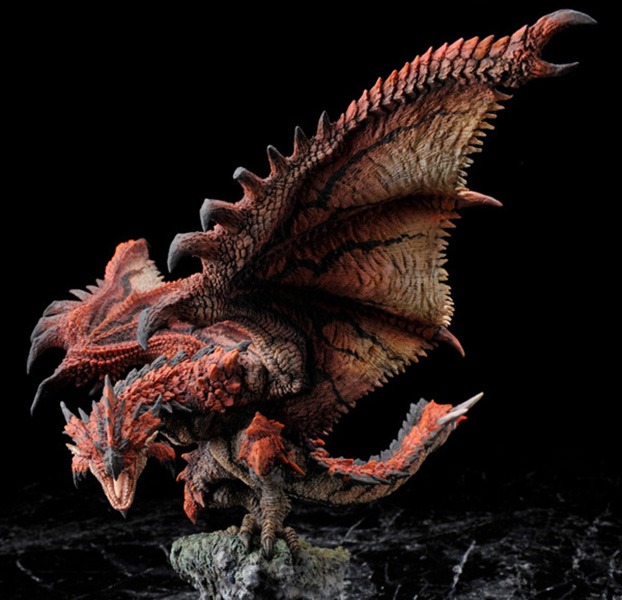 Taking our top spot is a pick that will surely make your collection very lively. Here we have Rathalos perched atop a rocky outcropping, ready to defend himself and his territory from any intruder. This wyvern is well known as an icon in the ceres, making an appearance in every installment so far! Standing just above 8”, this fiend shows off why he is a legend in this world!

Pros: This guy really is a sight to behold in the game, and the designers of this piece worked really hard to make sure he could hold his own in the real world as well! The red and black markings are game accurate, and the shading used on the scales is remarkable! The sculpting used to show off the scales is amazing, especially around the face and feet. Doing small scales like that is really difficult, but this work appears effortless! The dynamic pose is perfect! It’s his most well-known stance in the game world, and it translates remarkably well into our world. He is in stock at the time of writing to add to your collection.

Cons: Our biggest gripe comes with the pose. He’s known for taking this stance with his tail curled beside him, ready to lash out with it if needed. The pose is still amazing! We would have liked to see a variation with this small detail. Also, the coloring used on his talons that grip the rocky ground almost blend with the rock itself in places. Either a darker shade used on the deadly talons or a lighter color for the rocks would be nice to help distinguish one from the other. Despite these minor nitpicks, it’s easy to see why this guy can defend his spot as our top pick.

This game series has spawned some amazing figurines in our world! Any hardcore fan will be doing some hunting of their own to get these as part of their collection. From realistic portrayals of famous creatures to cute redesigns of armor sets, there’s a figure to match any taste or trophy showcase. So, hone your skills to be the first in your circle of friends to show off these awesome pieces as part of your shelf.