Lagrange: The Flower of Rin-ne 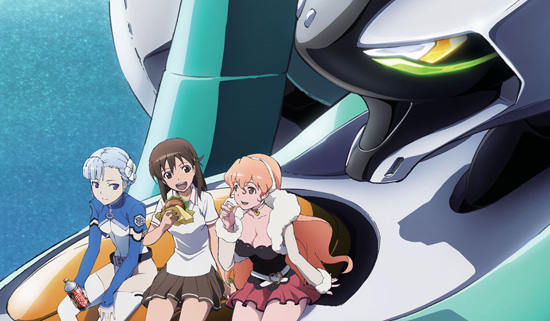 In the very first episode of Lagrange: The Flower of Rin-ne, we get robots, aliens, and girls stripping. Not necessarily in that order.

Ditsy high schooler Madoka is all about her Jersey Club, but soon she’s going to have bigger things to be concerned about. There are aliens threatening the destruction of earth—and other planets as well—and Madoka’s uncanny ability to pilot a robot might mean she’s earth’s last hope.

So why does someone as oftentimes clueless as Madoka get the ability to be earth’s savior? Well, something did happen in the past, and we get a flashback of it, some sort of underwater memory. Now all she has to do is think of a move, and the robot does it for her.

Lagrange: The Flower of Rin-ne has been available in streaming form, and VIZ Media debuted the English dub of it on Neon Alley last Friday. For my review, I was given a screener of the first four episodes in English, so that’s what I can base my assessments on. 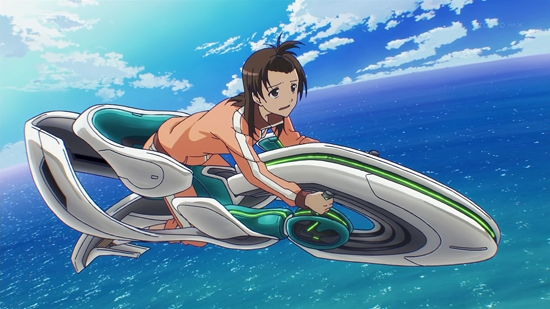 At the beginning, Lagrange: The Flower of Rin-ne seems like mecha mixed with fanservice. I mean, do we really need to see someone get pantsed in the first episode? (I know someone out there just said, “Yes.”) At the very beginning, details can also be confusing. It’s one of those action-first openings, where characters and backgrounds will be described later. We don’t really know a whole lot about Madoka, and we know even less about the other characters, but they’re already fighting, and earth’s future hangs in the balance.

While the opening is a little much on the fanservicey WTF moments, and some details are a little confusing at first, Lagrange then begins to clean itself up. Its story becomes more clear, it gets some real mystery in it, and some of the characters are starting to come out of their shells so the audience can get to know them and like them. Madoka has moments of being endearing, moments of being annoying, and moments mixing both—like when she sings a song about her “Jersey Club” while fighting aliens. But I guess that would also be another WTF moment.

At the end of four episodes, Lagrange is getting more interesting. It’s not clear yet how the whole series will play out and how strong it will be, but it’s getting the elements together for a good story.