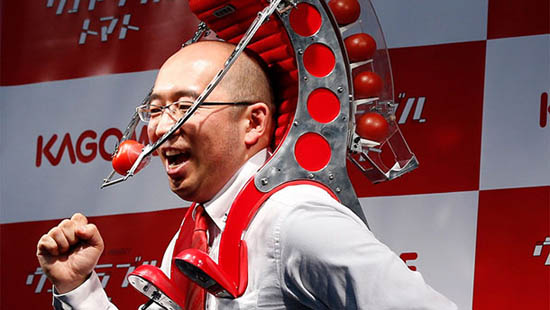 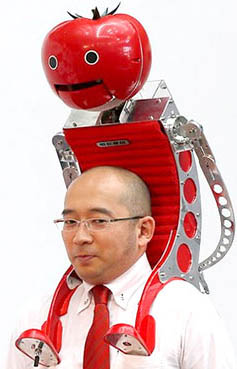 For otaku, staying in shape is a difficult, yet important task – just ask Gainax founder Toshio Okada, a.k.a. the Otaking. Aside from making scathing video criticisms of ongoing anime series, he has also written an entire book on getting in shape as a geek.

Undoubtedly, the toughest part is not finding time out from one’s addictive nerdy hobbies, or mustering the motivation necessary to exert the physical effort… it’s really just staying antioxidized. Come on, how many times have you been on a long run, struggling to keep breath, feeling as if you might die, and thought “IF ONLY I HAD A ROBOT SITTING ON MY SHOULDERS TO FEED ME TOMATOES!”?

At the Otaku USA offices, this happens daily.

Luckily, Shigenori Suzuki at Kagome Co. has heard our cries; his Wearable Tomato Dispenser weighs only about 18 pounds, and will lower up to seven tomatoes to your mouth at the flip of a switch (though not all at once). He explains:

“If we would eat tomatoes every day, the lycopene levels in our bodies increases, increases antioxidant power, and helps us to maintain our physical condition healthy”

We imagine his invention may also comply with the Goku/Piccolo regime of wearing weighted training gear for strength, and it may even be configurable to dispense fruit from the Tree of Might. If you are attacked during your run by shy guys or Wart, the king of Subcon, you will be equipped to defend yourself. Who needs pepper spray when you have tomatoes (also a robot)?

No word yet on when the lighter, infinitely more-practical waist-worn dispenser, modeled by video’s female cast member, will be available. For the moment, you will just have to make due with a fanny pack.

Source: So Bad So Good via Kagome