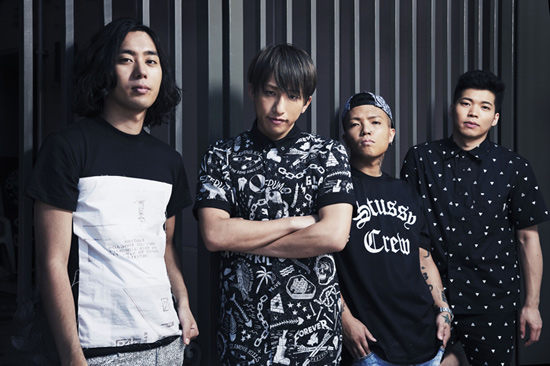 Tokyo-based band BACK-ON has been making high-energy music for anime openings and themselves for a little over a decade now. After breaking onto the scene with “Chain,” the opening song for 2006’s Air Gear, they’ve since gone on to create openings and endings for over a dozen anime and video games — including Eyeshield 21, Gundam Build Fighters and Fairy Tail — and several albums of original music. Their most recent album, Reload, was released in October of last year.

We recently had the chance to sit down to talk with the band, asking them about their influences, message, and a particularly important Dragon Ball ending theme.

OUSA: You were telling me before the interview started that you played in cover bands in high school before meeting up and starting BACK-ON. What kind of music did you play during that cover band era?

Kenji03: I was mostly in punk bands that covered Green Day songs, stuff from America, along with songs from a few other Japanese punk bands.

Teeda (mc, Rap vocals): I was in a band that covered L’arc-en-Ciel songs.

OUSA: Oh, were you a big fan of visual-kei?

Teeda: Not really. (laughs) I used to play bass, and that was the band I happened to be in.

OUSA: Did those bands end up serving as your primary inspirations once you started in earnest, or did you basically decide to do your own thing? Have your inspirations changed over the past decade?

Teeda: Our taste in music has definitely changed over the years. We’ve been exposed to way more stuff than when we were in high school, and re-listening to music we used to listen to is always interesting. We’ve learned so much over the years that we’re always discovering new things about the music we listened to growing up.

OUSA: The first song you guys had the chance to make for a TV anime was “Chain,” for Air Gear, which came out back in 2006. What led to the opportunity to create that song?

Teeda: Basically the record company asked us if we were interested in doing a song for the show. (laughs) It ended up becoming a big hit, and it’s a pretty significant song for us to this day. The success we had with “Chain” ended up leading to a lot of other companies asking us if we wanted to do theme songs for other shows, other opportunities in general.

OUSA: When you’re creating an opening song for an anime, is the creative process different than normal?

Teeda: It’s basically exactly the same. When we’re working on something for anime, there’s usually an existing property that it’s based on, so I’ll read or watch the original work to get a feel for what’s going on, what’s trying to be expressed. Sometimes we might try to match the energy of a song to a particular part of the opening animation, too.

At the same time, we also try our best to include our own message and sound in whatever we happen to be working on.

OUSA: Ah, okay. What would you say BACK-ON’s message is?

Teeda: Our main message is to stay positive. That’s what we’re trying to convey with most of our songs. We want to create music that’s going to be like a pat on the back to our listeners, something driving them forward in whatever they do. We prefer happy endings, basically.

OUSA: Were there any anime opening or ending songs you were particularly big fans of growing up?

Kenji03: There was that one ending for Dragon Ball, the one where Bulma’s got that look on her face, staring out the window—

Gori (bass): What are you talking about? (laughs)

Teeda: I remember the melody for that one being really weird.

Kenji03: It always came on late in the afternoon, after school. Man, I want to hear that song again. Does anyone have it on their phone?

(at this point, one of the band’s managers found the video on youtube and played it through their phone)

Kenji03: Oh this is it! Good song. Instantly brings back these memories of sitting down for dinner while this played on TV.

OUSA: Did anyone in the band cover this song at some point?

Kenji03: Not yet, but it’s under consideration. Might be hard to fit in a rap section, though.

Teeda: I’ll figure something out.

OUSA: So is it safe to say this song was an inspiration to the band?

Kenji03: Definitely. Huge. It taught me things about how to make a song emotional, and it’s a healing song to me to this day.

OUSA: Do you have any musical inspirations that you’ve discovered fairly recently? Something that’s maybe influenced the sound of the band in the past 5 years or so?

Teeda: Pro Era’s a big one. They’re a hip-hop group, huge fan of those guys.

Shu (lead guitar): I don’t know if this counts, but we were walking around the last city we were on tour at, and I noticed Journey songs playing everywhere. Oh, actually. I also recently started listening to The Who for the first time.

OUSA: Do you ever go back and listen to songs you wrote from that time period and notice anything new that you can bring back to your current compositions?

Teeda: “Man, I sure sounded young back then.” (laughs) I definitely notice things that I wish we could fix, but that’s just how it is when you write music. I’ve also gotten ideas from going back and listening to older stuff of ours that ended up making it into songs we’re writing now. It goes both ways.

OUSA: You’re in the middle of a worldwide tour right now, and recently performed in Mexico City and Houston. Any memorable stories from your time on tour you’d like to share?

Teeda: There was this concert in Houston where I threw a shirt I was wearing into the crowd and I could just see it get torn to shreds in front of my eyes. The next day, this girl brought one of those shreds to an autograph session to have me sign it. (laughs)

Kenji03: Everywhere we’ve been has been great. It’s awesome getting to hear people from all over the world sing our songs, every city’s interesting and different, it’s just been great.

OUSA: Any message to your overseas fans you’d like to get out?

Teeda: We’ve been getting better over time as we travel to different cities in the course of touring. If you saw us before and were impressed, you’re going to be blown away when you hear how much more powerful we sound now. If you bring your friends, memorize the lyrics to our songs and show up to have a good time, that means a lot to us.

Thanks to Sachiko Uchida for assistance with interpretation.