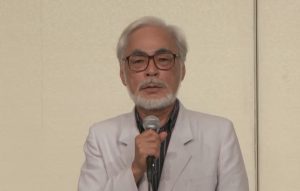 GKIDS has something special in store for fans of Studio Ghibli and acclaimed director Hayao Miyazaki. The producer and distributor announced its acquisition of the North American distribution rights for NHK’s documentary feature film on the creator, Never-Ending Man: Hayao Miyazaki.

Director Kaku Arakawa’s documentary follows Miyazaki after his 2013 retirement announcement and through the tumultuous creation of the 12-minute short that would have him experimenting with computer animation. Check out the official U.S. trailer below.

The theatrical release of Never-Ending Man is currently planned for winter 2018.

NEVER-ENDING MAN: HAYAO MIYAZAKI follows formerly-retired film director and animator Hayao Miyazaki as he experiments for the first time with CGI. Miyazaki is a Japanese film director, producer, screenwriter, animator, author, and manga artist. In 1985 he co-founded Studio Ghibli and went on to direct highly influential and acclaimed animated films such as Castle in the Sky, My Neighbor Totoro, Princess Mononoke and Spirited Away – which won the Academy Award for Best Animated Feature in 2003. Miyazaki’s critical and commercial success continued through his final run of films including Howl’s Moving Castle, Ponyo, and The Wind Rises. After the 2013 release of The Wind Rises, he announced his retirement from directing, however his endlessly inventive mind has turned towards new creative avenues.